O to Jehovah give ye thanks, and call 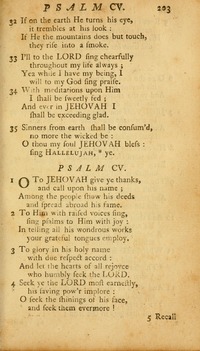 O to Jehovah give ye thanks, and call

1 O To JEHOVAH give ye thanks,
and call upon his name;
Among the people show his deeds
and spread abroad his fame.
2 To Him with raised voices sing,
sing psalms to Him with joy:
In telling ail his wondrous works
your grateful tongues employ.


3 To glory in his holy name
with due respect accord:
And let the hearts of all rejoice
who humbly seek the LORD.
4 Seek ye the LORD mod earnestly,
his saving pow'r implore:
O seek the shinings of his face,
and seek them evermore!


5 Recall to mind what He hath wrought,
each admirable deed,
His wonders, and the judgments which
did from his mouth proceed.


[2 Part]
6 O ye the seed of Abraham,
his servant and his friend,
And ye the chosen race who from
his Jacob dear descend.
7 JEHOVAH the Almighty is
by covenant our God:
And his most righteous judgments are
in all the earth abroad.


8 His covenant He ever minds,
the word He did command,
Ev'n to a thousand ages down
unshaken still to stand.
9 The covenant which first He made
with faithful Abraham;
And then to Isaac with an oath
did He renew the same;


10 And then to Jacob for a law,
He made it firm and sure,
A covenant to Israel
which ever should endure.
11 Wherein He said, 'I will to you
'the land of Canaan give,
'The lot of your inheritance,
'where you and your's shall live.'


12 And when in number they were small
against their foes to stand;
Yea at the first but very few,
and strangers in the land;
13 When they thro' various nations went,
from realm to realm remov'd;
14 He suffer'd none to do them wrong,
but Kings for them reprov'd.


15 He said to those who sat on thrones,
let no presumptuous arm
Dare touch my dear anointed ones,
nor do my prophets harm.


[3 Part]
16 He call'd a famine on the land,
and break the staff of bread.
17 But he before had sent a man
by whom they should be fed:
Joseph was into Egypt sold,
and there a slave was made;
18 Whose feet with fetters hurt, his soul
was pierc'd, in irons laid.


19 Till in due time the blessed word
of inspiration came,
A revelation from the LORD
that try'd and clear'd his name:
20 And then the king commandment gave,
that he enlarg'd should be;
The sov'reign of the nation sent
and set him fully free.


21 Yea made him ruler of his house,
the chief of all his land;
And all the substance he possess'd
committed to his hand.
22 With full commission, at his will
his princes to controul,
And teach his wisest senators
the wisdom how to rule.


23 His father Isr'el, with his house
then into Egypt came;
And Jacob was a sojourner
within the land or Ham.


[4 Part]
24 His people then exceedingly
He multiplied there,
And made them mightier than those
who their oppressors were.
25 Their hearts then turn'd, that they to hate
his people, did arise;
And with his servants craftily
to deal, did they devise.


26 His servant Moses then He sent,
Aaron his chosen too;
27 Who did within the land of Ham
His signs and wonders show.
28 He darkness sent, and made it dark:
all things his word obey:
29 He turn'd their waters into blood,
and He their fish did slay.


30 Great swarms of frogs spread o'er their land;
Yea chambers of their kings:
31 His word ail sorts of flies and lice
in all their borders brings.
32 For rain he pour'd down storms of hail;
flames on their land he sent:
33 When He their vines and fig-trees smote,
yea all their trees He rent.


34 He spake, and caterpillars came,
and locusts swarm'd around;
35 Which eat the herbs of all their fields,
and fruits of all their ground.
36 Then in one dreadful night He slew
their first-born thro' the land,
The chief of all their strength, ev'n by
a mighty angel's hand.


[5 Part]
37 But thence with gold and silver He
His people made to pass;
Nor had they one among their tribes
that faint 'or feeble was.
38 All Egypt was exceeding glad,
to see them thence depart;
So great a fear of Jacob's race,
had seiz'd on ev'ry heart.


39 By day He for a cov'ring spread
a cloud; and in the night
He made it like a shining fire,
to give them kindly light.
40 He brought them living quails for food,
when flesh they ask'd to have;
And satisfy'd them with the bread
which then from heav'n He gave.


41 He open'd wide the flinty rock,
there gushed out a stream;
Which through the dry and desart land
in rivers follow'd them.
42 He on his holy promises,
and servant Abr'ham thought:
43 With joy his people, and with songs
He forth his chosen brought.


44 And then to them the pleasant lands
He of the heathen gave,
That of the nations labours they
inheritance might have.
45 That they his statutes might observe
in perfect purity;
And in full freedom keep his laws:
sing HALLELUJAH ye!

Source: The Psalms Hymns and Spiritual Songs of the Old and New Testament, faithfully translated into English Metre: being the New-England Psalm-Book, revised and improved... (2nd ed.) #PCV 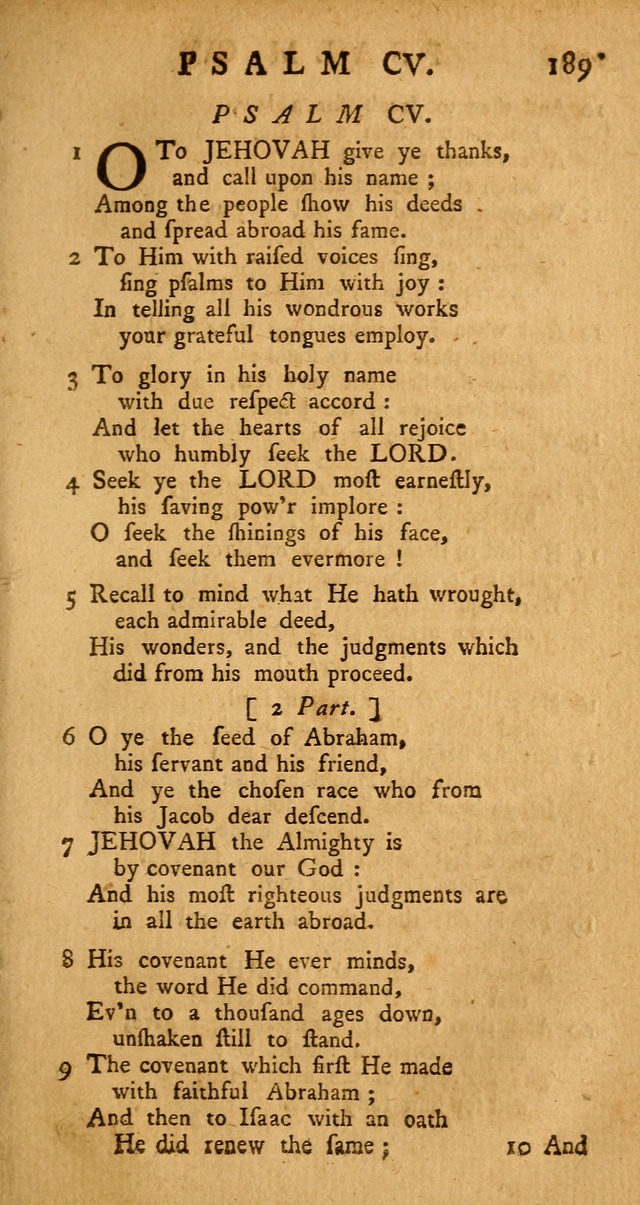 View Page
The Psalms Hymns and Spiritual Songs of the Old and New Testament, faithfully translated into English Metre: being the New-England Psalm-Book, revised and improved... (2nd ed.) (1773), p.189
^ top

The Psalms Hymns and Spiritual Songs of the Old and New Testament, faithfully translated into English Metre #PCV

The Psalms, Hymns and Spiritual Songs of the Old and New Testament, faithully translated into English metre #PCV