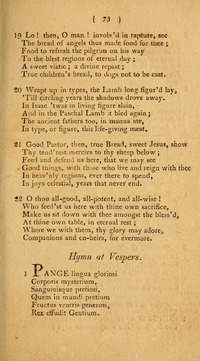 St. Thomas of Aquino. [Holy Communion.] One of the finest of the mediaeval Latin hymns, a wonderful union of sweetness of melody with clear-cut dogmatic teaching. It was written for the office of the Festival of Corpus Christi, which St. Thomas drew up in 1263, at the request of Pope Urban IV. The metre and the opening line are imitated from Fortunatus. It is found in the Roman (Venice, 1478; and again, untouched, in 1632); Mozarabic of 1502, Sarum, York, Aberdeen, Paris of 1736, and many other Breviaries. Whereever employed it was always primarily for use on Corpus Christi, either at Matins (Sarum), or at Vespers (Roman). It has also been used as a processional on Corpus Christi, in the Votive Office of the Blessed Sacrament, at the Forty Hours, and otherwise. Stanza v., "Tantum ergo sacramentum," with the magnificent doxology, is sung as a separate hymn in the office of the Benediction of the Blessed Sacrament, or during Mass at the Elevation of the Host. The text, in 5 st. and a doxology, will be found in Daniel, i., No. 239, the Hymn. Sarisb, 1851, p. 121, and others. [Rev. W. A. Shoults, B.D.]

Tantum ergo sacramentum. This portion of the "Pange lingua," consisting of st. v. and vi., and sung in the office of the Benediction of the Blessed Sacrament, &c, as noted above, has been tr. by all the above-named translators, and each translation is given as the conclusion of the original hymn. In a few instances the stanzas (v.-vi.) are given as a separate hymn in English, as in Latin. These include (1) Caswall's "Down in adoration falling," which appears in some Roman Catholic hymn-books for missions and schools; (2) a cento in the Altar Hymnal 1884, in 2 st., the first being Caswall altered, and the second the doxology from Hymns Ancient & Modern as "Down in lowly worship bending;" and (3) Neale's translation, altered to "Bow we then in veneration," in the 1863 Appendix to the Hymnal N.

Dr. Neale's estimate of this hymn is well known. His words are so few and to the point that we may quote them here:—

"This hymn contests the second place among those of the Western Church with the Vexilla Regis, the Stabat Mater, the Jesu dulcis Memoria, the Ad Begias Agni Dopes, the Ad Supernam, and one or two others, leaving the Dies Irse in its unapproachable glory." (Mediaeval Hymns 3rd ed., 1867, p. 179.)

Concerning translations, and of his own in particular, he says:—

"It [the hymn] has been a bow of Ulysses to translators. The translation above given [his own] claims no other merit than an attempt to unite the best portions of the four best translations with which I am acquainted —Mr. Wackerbarth's, Dr. Pusey's, that of the Leeds book, and Mr. Caswall's.....The great crux of the translator is the fourth verse."

Before continuing Dr. Neale's remarks it will be well to give the original Latin of st. iv., which reads:—

Dr. Neale continues, "I give all the translations:—

(1) ‘God the Word by one word maketh
Very Bread His Flesh to be:
And whoso that Cup partaketh,
Tastes the Fount of Calvary:
While the carnal mind forsaketh,
Faith receives the Mystery.' [Leeds Hymn Book]

"Here the incarnation of the Word, so necessary to the antithesis, is omitted: and so exact a writer as Saint Thomas would never have used the expression by one word.

"Here the antithesis is utterly lost, by the substitution of Incarnate for made flesh, and bidding for word, to say nothing of Blood-shedding, for Blood.

(3) ‘Word made Flesh! The Bread of nature,
Thou by word to Flesh dost turn:
Wine, to Blood of our Creator:
If no sense the work discern,
Yet the true heart proves no traitor:
Faith unaided all shall learn.' [Pusey.]

"Here the antithesis is preserved, though at the expense of the vocative case. And surely Saint Thomas, in an exact dogmatical poem, would not have spoken of the Blood of our Creator. Mr. Caswall, following up the hint given by the last version, and substituting the apposite pronoun for the vocative, has given, as from his freedom of rhyme might be expected, the best version.

(4) ‘Word made Flesh, the Bread of nature
By a word to Flesh He turns:
Wine into His Blood He changes:
What though sense no change discerns,
Only be the heart in earnest,
Faith the lesson quickly learns.’

"In both these last translations [Pusey and Caswall], however, the panem verum, of Saint Thomas is not given; and Mr. Caswall brings in the worse than unnecessary article—-‘By a word.' [It must be noted that Dr. Neale must have quoted Caswall from memory or from some other source than Caswall's Lyra Catholica, 1849, p. 112, where 1. 2 reads, "By his word to Flesh He turns;" and 1. 6, "Faith her lesson quickly learns." These readings of 1849 are repeated in Caswall's Hymns & Poems, 1873, p. 63. Did Dr. Neale misread Caswall, or did Caswall publish a text distinct from that in his Lyra Catholica ?]
"Since the first edition of my book [1851], Hymns Ancient and Modern have produced a translation put together from former ones,-—but nearer my own version than to any other. Their fourth verse is their weakest:—

‘Word made Flesh, True Bread He maketh
By His word His Flesh to be:
Wine His blood; which whoso take
Faith alone, though sight forsaketh,
Shows true hearts the Mystery.'

“It is needless to observe that the Italicised line and a half is not in the original. ‘Forsaketh’ too, is scarcely English. I have substituted an alteration of Hymns Ancient and Modern for my original 5th verse, ‘Therefore we, before it bending.']"

After this exhaustive criticism by Dr. Neale we must give his rendering of the same passage. It reads:—

"Word made Flesh, by Word He maketh
Very Bread His Flesh to be;
Man in wine Christ's Blood partaketh,
And if senses fail to see,
Faith alone the true heart waketh,
To behold the Mystery."

These examples of translations could be increased to the total number known. The result, however, would be to add materially to the length of this article without increasing its historical value. 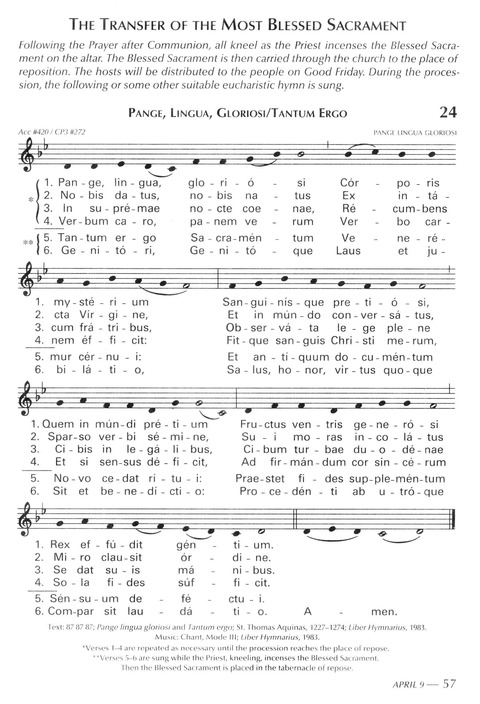