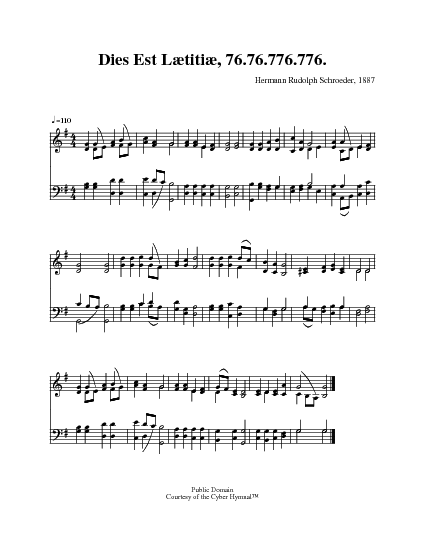 1. Royal day that chasest gloom!
Day by gladness speeded!
Thou beheld’st from Mary’s womb
How the King proceeded;
Whom, true Man, with praise our choir
Hails, and love, and heart’s desire,
Joy and admiration;
Who, true God, enthroned in light,
Passeth wonder, passeth sight,
Passeth cogitation.


2. On the virgin as He hung,
God, the world’s Creator,
Like a rose from lily sprung—
Stood astounded nature:
That a maiden’s arms enfold
Him that make the world of old,
Him that ever liveth:
That a maiden’s spotless breast
To the King eternal rest,
Warmth and nurture, giveth!


3. As the sunbeam through the glass
Passeth, but not staineth,
Thus the virgin, as she was,
Virgin still remaineth:
Blessèd mother, in whose womb
Lay the light that exiles gloom,
God, the Lord of ages;
Blessèd maid! from whom the Lord,
Her own Infant, God adored,
Hunger’s pains assuages.

Dies est laetitiae, In ortu regali. [Christmas.] This Christmas hymn or carol, which Luther spoke of as a work of the Holy Spirit, seems to be of German origin, and is probably not earlier than the 14th century.

G. Goeze, of Jena, in 1703, started the theory that this hymn was written by Benno, created Cardinal in 1085 by the Anti-Pope Clement III. Other German writers of the 18th century, misunderstanding this statement, forthwith pronounced it the work of Benno, Bishop of Meissen, who d. 1101...For neither supposition is there the slightest vestige of evidence. It exists in various forms, and as will be seen below, the early German versions give no help in determining what number of stanzas it originally possessed.

Translation in common use:—
Royal day that chasest gloom. By J. M. Neale, published in his Mediaeval Hymns, 1851, in 3 stanzas of 10 lines. This is a paraphrase rather than a literal rendering of the shorter form of the hymn. In 1854 it was rewritten by Dr. Neale for his Christmas Carols, and in this form it passed into the People's Hymnal, 1867, No. 34.

All tunes published with 'Royal day that chasest gloom'^ top