Shall We Gather at the River?

Shall we gather at the river

1 Shall we gather at the river,
Where bright angel feet have trod;
With its crystal tide forever
Flowing by the throne of God?


2 On the margin of the river,
Washing up its silver spray,
We will walk and worship ever,
All the happy golden day. [Refrain]


3 Ere we reach the shining river,
Lay we ev'ry burden down;
Grace our spirits will deliver,
And provide a robe and crown. [Refrain]


4 Soon we'll reach the shining river,
Soon our pilgrimage will cease;
Soon our happy hearts will quiver
With the melody of peace. [Refrain]

All tunes published with 'Shall We Gather at the River?'^ top

Robert Lowry wrote this hymn after meditating on a picture of heaven in Revelation 22:1-2a, “Then the angel showed me the river of the water of life, bright as crystal, flowing from the throne of God and of the Lamb through the middle of the street of the city” (ESV). After contemplating the question “Shall we gather at the river?” the answer came to him in faith, “Yes, we'll gather at the river.”

This hymn was written by Robert Lowry in the summer of 1864 in Brooklyn, New York. The text came out of Lowry's thoughts on the metaphor of the river in Christian thoughts about death. He wrote, “I began to wonder why the hymn-writers has said so much about the 'river of death' and so little about 'the pure water of life, clear as crystal, proceeding out of the throne of God and of the Lamb'” (William J. Reynolds, Companion to Baptist Hymnal, p. 191). It was first published as “Beautiful River” in Happy Voices in 1865.

The text originally had five stanzas and a refrain, but the fourth (“At the smiling of the river”) is usually omitted. The first stanza asks a question about meeting the saints who have gone on before at the river of life, and the refrain is an affirmative answer. The remaining stanzas expand on the theme of Christian death and eternal life.

The tune is also by Robert Lowry and was written for the words in 1864. It was named HANSON PLACE after Hanson Place Baptist Church in Brooklyn, New York, where Lowry was serving as pastor at that time. The stanza and refrain have two phrases each, and share common rhythmic motifs. At a fast tempo, this tune sounds like marching band music, but at a moderately slow tempo, it sounds thoughtful. This hymn works well when sung in harmony.

This hymn is appropriate for services with a theme of a Christian approach to death, or on scriptures such as Revelation 22. It may also be sung at funerals or for All Saints' Day. This hymn could be used as a prelude in an instrumental arrangement such as “At the River” for the interesting combination of cello and handbells. Settings suitable for use as a choral anthem abound. A calm yet energetic setting of this hymn is “The Shining River” for choir and keyboard with optional brass and percussion. “Shall We Gather at the River” is also quite popular in combination with spirituals. One of the arrangements in “Spirituals for Two Voices” is a medley of “Deep River” and “Shall We Gather at the River.” This same arrangement is for choir in “Singin’ in the Spirit.” Pepper Choplin's “Gather by the River to Pray” is a combination of the spiritual “As I Went Down to the River to Pray” with Lowry’s hymn for choir with simple piano accompaniment. 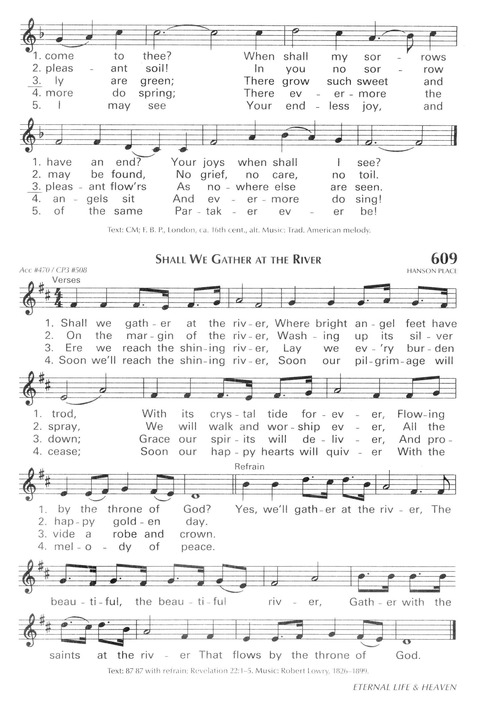 A New Hymnal for Colleges and Schools #565

A New Hymnal for Colleges and Schools #566

Hymns for a Pilgrim People #480

Sacred Selections for the Church #414

The Song Book of the Salvation Army #891

Display Title: Shall We Gather at the River First Line: Shall we gather at the river Tune Title: HANSON PLACE Author: Robert Lowry Meter: 87.87 with Refrain Scripture: Revelation 22:1-5 Date: 1989 Subject: New Heaven and a New Earth | The Completion of Creation (The City of God); Christian Year | All Saints Day; Heaven | ; Pilgrimage | ; Triumph |
The United Methodist Hymnal #723