Shall We Go On To Sin 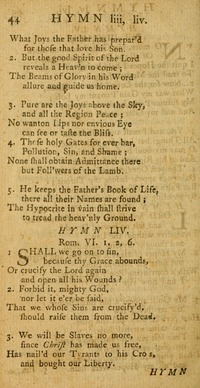 Shall we go on to sin

Shall we go on to sin
Because thy grace abounds;
Or crucify the Lord again,
And open all his wounds?


Forbid it, mighty God!
Nor let it e'er be said,
That we whose sins are crucified
Should raise them from the dead.


We will be slaves no more,
Since Christ has made us free;
Has nailed our tyrants to his cross,
And bought our liberty.

Shall we go on to sin? I. Watts. [Rom. vi. 1-6.] First published in his Hymns, &c, 1709, Book i., No. 106, in 3 stanzas of 4 lines, and entitled "Death to sin by the Cross of Christ." Its use is limited. Original text in modern editions of Watts. In the Draft of the Scottish Translations and Paraphrases, 3745, it was given as "And shall we then go on to sin?" the alterations being confined to the change of metre. In adopting the hymn for the authorized issue of the Translations, in 1781, No. xlvii. (Rom. vi. 1-7), the first line only of the 1745 alterations was retained, the whole hymn being rewritten in 4 stanzas of 4 lines. This recast has very little indeed of Watts, being to a great extent new. This form, according to the markings of the eldest daughter of W. Cameron, was by Cameron. It is given in several modern collections.

Also called: WIRKSWORTH WIRKSWORTH was first published in John Chetham's collection A Book of Psalmody (1718) and gained its present shape in James Green's Book of Psalm Tunes (1724). Set in minor tonality, WIRKSWORTH has a folk-like charm. The tune's name derives from the town Wirksworth in Derbysh…

All tunes published with 'Shall We Go On To Sin'^ top 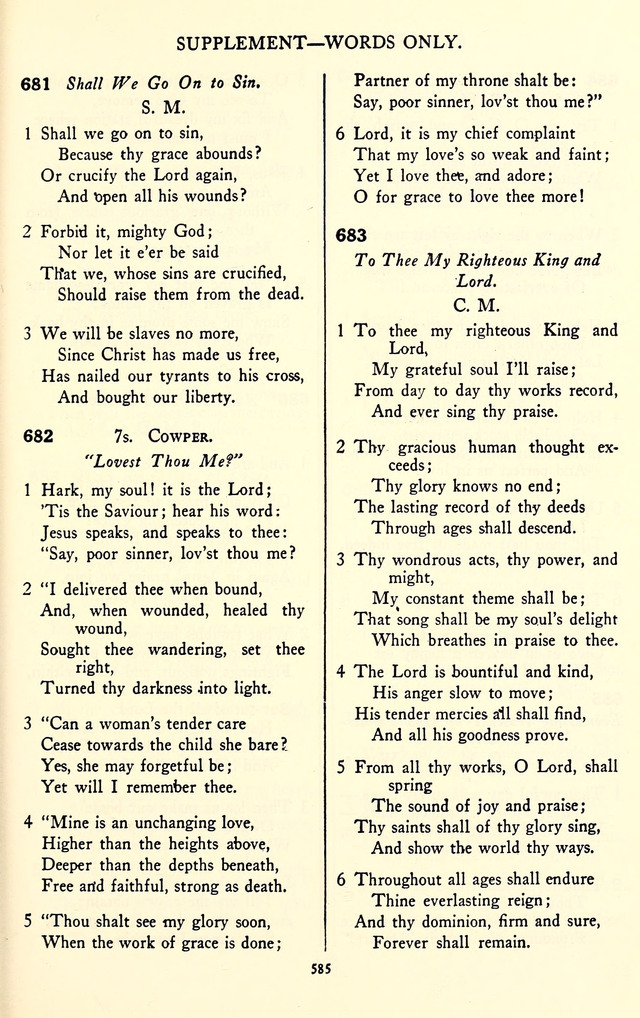 A Baptist Hymn Book, Designed Especially for the Regular Baptist Church and All Lovers of Truth #d649

A Choice Selection of Psalms, Hymns and Spiritual Songs for the use of Christians #533

A Collection of Psalms and Hymns for the use of Universalist Societies and Families (13th ed.) #629

A Collection of Psalms and Hymns for the Use of Universalist Societies and Families 16ed. #629

A Collection of Psalms, Hymns, and Spiritual Songs #343

A New Selection of Psalms, Hymns and Spiritual Songs #410

A New Version of the Psalms of David #HLIV

Church Hymn Book; consisting of hymns and psalms, original and selected. adapted to public worship and many other occasions. 2nd ed. #228

Hymns for Youth, Suitable to be Used in Sabbath and Parochial Schools #129

Hymns of the Church Militant #202

Melodies of the Church #d864

Psalms and Hymns Adapted to Social, Private and Public Worship in the Presbyterian Church in the U.S.A. #d722

Songs for Social and Public Worship #610

Songs for the Sanctuary, or Hymns and Tunes for Christian Worship #ad966

Songs for the Sanctuary, or Hymns and Tunes for Christian Worship #b540

Songs for the Sanctuary; or Psalms and Hymns for Christian Worship (Baptist Ed.) #540

Songs for the Sanctuary; or, Psalms and Hymns for Christian Worship (Words only) #540

Display Title: Death of Sin by the Cross First Line: Shall we go on in sin Date: 1834
Spiritual Songs for Social Worship #122

The American Vocalist #105b

The Baptist Hymn and Tune Book for Public Worship #627

The Christian Psalmist; or, Watts' Psalms and Hymns #475

The Ebenezer Selection of Hymns and Spiritual Songs, with an appendix Consisting of Miscellaneous Pieces. 6th ed. #d478

The New Congregational Hymn and Tune Book, for Public, Social and Private Worship #464

The Psalms and Hymns, with the Catechism, Confession of Faith, and Liturgy, of the Reformed Dutch Church in North America #33b

The Psalms and Hymns, with the Doctrinal Standards and Liturgy of the Reformed Protestant Dutch Church in North America #H420

The Psalms and Hymns #33b

The Psalms of David #I.CVI

The Psalms of David #H33.II

The Psalms, Hymns and Spiritual Songs of the Rev. Isaac Watts, D. D. #A106