Resurrection of the Saints

WIRKSWORTH was first published in John Chetham's collection A Book of Psalmody (1718) and gained its present shape in James Green's Book of Psalm Tunes (1724). Set in minor tonality, WIRKSWORTH has a folk-like charm. The tune's name derives from the town Wirksworth in Derbyshire, England. Antiphonal performance is desirable for singing the entire group of seven stanzas; each stanza could also be divided so that each group sings one of the Beatitudes. Another option is to alternate unison and harmony singing throughout. Everyone should sing the final stanza.

Samuel S. Wesley (b. London, England, 1810; d. Gloucester, England, 1876) harmonized the tune and published it in his European Psalmist (1872). A grandson of Charles Wesley (PHH 267), Samuel Sebastian was a chorister at the Chapel Royal and sang in St. Paul's Cathedral. He learned composition and organ from his father, Samuel (PHH 1), completed a doctorate in music at Oxford, and composed for piano, organ, and choir. He was organist at Exeter Cathedral (1835-1842), Leeds Parish Church (1842¬1849), Winchester Cathedral (1849-1865), and Gloucester Cathedral (1865-1876). Wesley strove to improve the standards of church music and the status of church musicians; his observations and plans for reform were published as A Few Words on Cathedral Music and the Music System of the Church (1849). He was the musical editor of Charles Kemble's A Selection of Psalms and Hymns (1864) and of the Wellburn Appendix of Original Hymns and Tunes (1875) but is best known as the compiler of The European Psalmist (1872), in which some 130 of the 733 hymn tunes were written by him.

Text: Stretched On The Bed Of Grief

Text: Blest Are the Contrite Hearts

With Heart and Voice: songs for all God's children #34 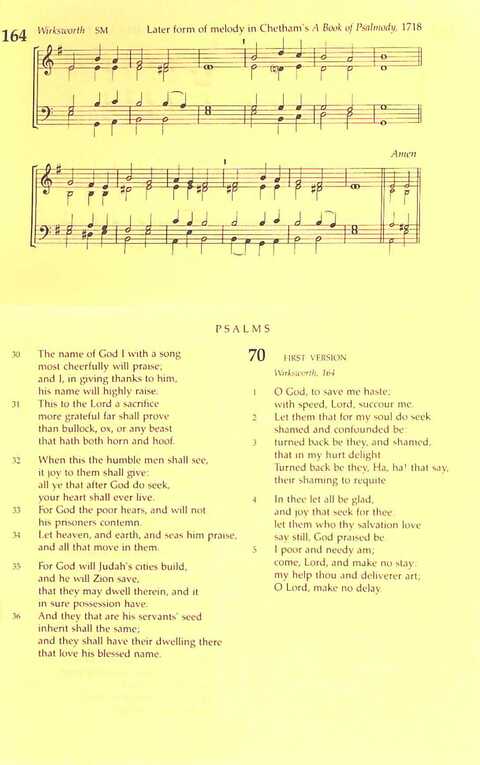 The New English Hymnal #342b

Tune Title: WILL GUIDE US TILL WE DIE (AYLESBURY) First Line: The God we worship now Date: 2012
The Sacred Harp #28t

The Sacred Harp #28a

With Heart and Voice #34