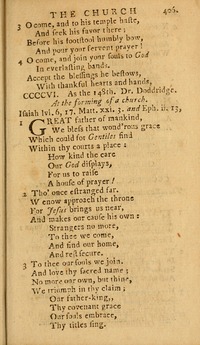 
2 Thy comprehensive view surveys
Our wandering paths, our trackless ways;
Send forth, O Lord, thy truth and light,
To guide our doubtful footsteps right.


3 With longing eyes, behold, we wait
In suppliant crowds at mercy's gate:
Our drooping hearts, O God, sustain:
Shall Israel seek thy face in vain?


4 O Lord, in ways of peace return,
Nor let thy flock neglected mourn;
May our blest eyes a shepherd see,
Dear to our souls, and dear to thee.


5 Fed by his care, our tongues shall raise
A cheerful tribute to thy praise;
Our children learn the grateful song,
And theirs the cheerful notes prolong.

Shepherd of Israel, bend Thine ear. P. Doddridge. [During a Ministerial Vacancy.] In the D. manuscript this is No. 63, in 5 stanzas of 4 lines, and is headed, "Of seeking a right way from God, from Ezra viii. 21. At a meeting of ministers at Bedworth, during their long vacancy;" and is dated "April 10, 1735." It was published by Job Orton in his posthumous edition of Doddridge's Hymns, &c, 1755, No. 370, in a slightly altered form; and the same text was repeated in J. D. Humphreys's edition of the same, 1839. It is usually given in modern hymnbooks in a slightly altered form from that of 1755. In the Songs for the Sanctuary, N. Y., 1865, st. ii.-iv. are given as "O Lord, Thy pitying eye surveys." 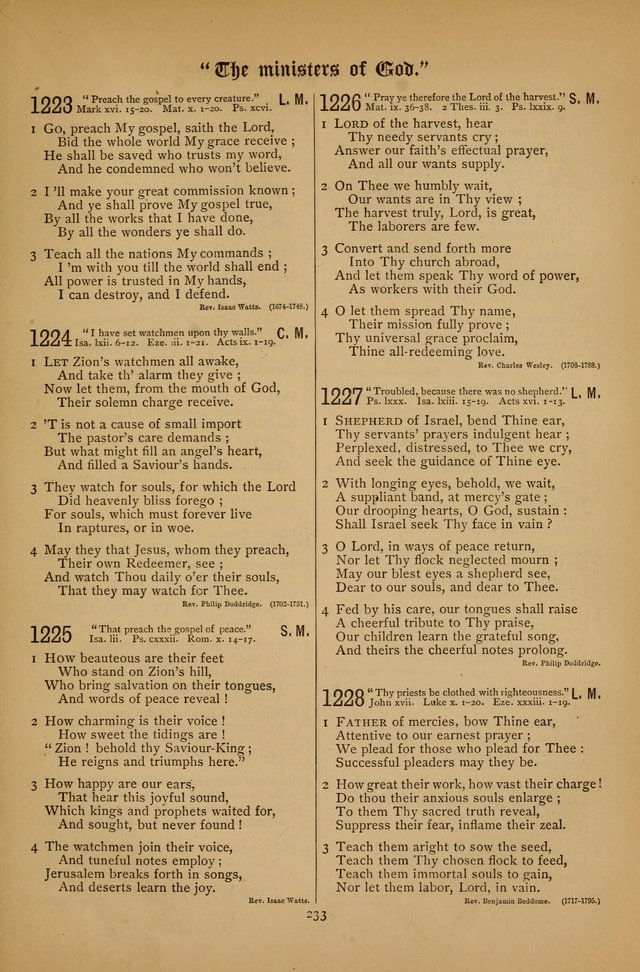 A New Selection of Hymns; designed for the use of conference meetings, private circles, and congregations, as a supplement to Dr. Watts' Psalms and Hymns #430

A New Selection of Nearly Eight Hundred Evangelical Hymns, from More than 200 Authors in England, Scotland, Ireland, & America, including a great number of originals, alphabetically arranged #455

A New Selection of Psalms and Hymns from the Most Approved Authors, Adapted to Public and Private Worship. 2nd ed. #d419

A New Selection of Seven Hundred Evangelical Hymns ... intended as a Supplement to Dr. Watts's Psalms and Tunes #455

A Selection of Hymns and Spiritual Songs #d188

A Selection of Hymns and Spiritual Songs #H.CCCXLIV

A Selection of Hymns and Spiritual Songs #H.CCCXLIV

A Selection of Hymns from the Best Authors, intended to be an Appendix to Dr. Watts' Psalms & Hymns. 2nd Baltimore ed. #aCCCCIX

A Selection of Hymns from the Best Authors. #409

A Selection of Hymns, adapted to the devotions of the closet, the family, and the social circle; and containing subjects appropriate to the monthly concerns of prayer for the success... #555

A Selection of Hymns, from the Best Authors, Designed as a Supplement to Dr. Watts' Psalms and Hymns #d534

A Selection of Hymns #CCCCIX

Additional Hymns, Adopted by the General Synod of the Reformed Dutch Church in North America, at their Session June 1831. 2nd ed. #152

Church Pastorals, hymns and tunes for public and social worship #731

Hymns and Songs of Praise for Public and Social Worship #846

Hymns, Selected and Original, for Public and Private Worship #570

Psalms, Hymns and Spiritual Songs ... for the Use of the United Church of Christ, Commonly Called Free Will Baptist #d252

The Clifton Chapel Collection of "Psalms, Hymns, and Spiritual Songs" #1227

The Halifax Selection of Hymns #d358

The Psalms and Hymns, with the Catechism, Confession of Faith, and Liturgy, of the Reformed Dutch Church in North America #A152

The Psalms and Hymns, with the Doctrinal Standards and Liturgy of the Reformed Protestant Dutch Church in North America #H506