Son of the highest, deign to cast 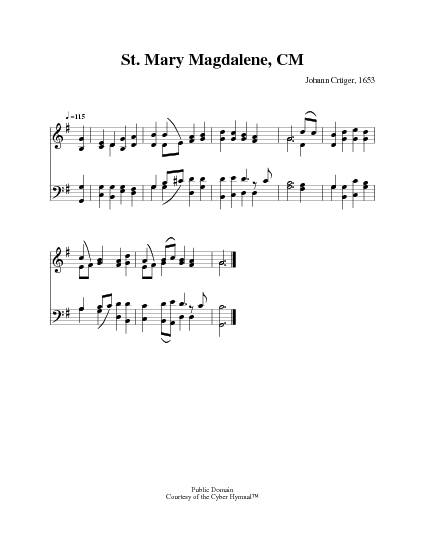 Son of the highest, deign to cast

1. Son of the Highest, deign to cast
On us a pitying eye,
Thou who repentant Magdalene
Didst call to joys on high.


2. Thy long lost coin is stored at length
In treasure house divine,
The jewel from pollution cleansed
Doth now the stars outshine.


3. Jesu, the balm of every wound,
The sinner’s only stay,
Grant us, like Magdalene, to weep
In this Thy mercy’s day.


4. Absolve us by Thy gracious Word,
Fulfill us with Thy love,
And guide us through the storms of life
To perfect rest above.


5. All praise, all glory be to Thee,
O everlasting Lord,
Whose mercy doth our souls forgive,
Whose bounty doth reward.

Aeterni Patris Unice. Anon. [St. Mary Magdalene.] This hymn has been ascribed to St. Odo of Cluny; and is found in a manuscript of the 11th century, in the British Museum (Vesp. D. xii. f. 1536) added to the "Lauda Mater ecclesia" (q. v.). Both hymns are apparently in a later handwriting than the first part of the manuscript Daniel, i. No. 348, reprinted the text of Card. Newman, changing the opening word from "Eterne," to Aeterni. Mone, reprinted the text of a manuscript of the 14th century, and added thereto numerous references to manuscripts and various readings; and Daniel, iv. 244, the revised text of the Roman Breviary Summi parentis Unice. The text of the York Breviary is given in Card. Newman's Hymni Ecclesiae, 1838, and the Roman Breviary form in Biggs's Annotated Hymns Ancient & Modern with stanzas ii. 1. 2, "Reconditur aerario," for "Reconditur est aerario," in error. The older text sometimes reads, "Patris Aeterne Unice" . [Rev. W. A. Shoults, B. D.]
Translations in common use:—
1. Son of the Highest, deign to cast. By E. Caswall. Appeared in his Lyra Catholica, 1849, p. 164, and his Hymns and Poems, 1873, p. 89. In 1861 it was given with alterations in Hymns Ancient and Modern, the same text being repeated in the revised edition, 1875. A less altered text is No. St. John's Hymnal, Aberdeen, 1870.

All tunes published with 'Son of the highest, deign to cast'^ top 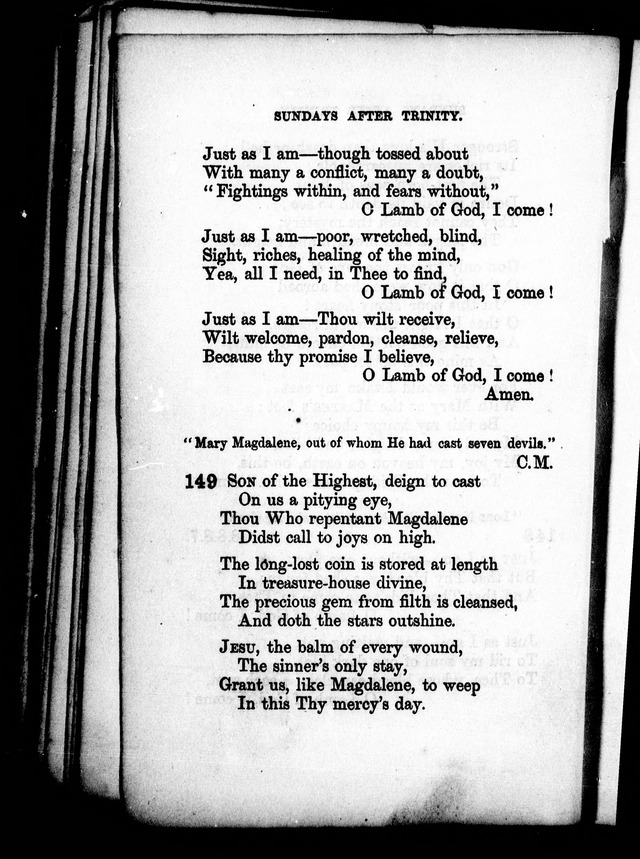 View Page
A Church Hymn Book: for the use of congregations of the United Church of England and Ireland (1861), p.144
^ top