What Shall the Harvest Be 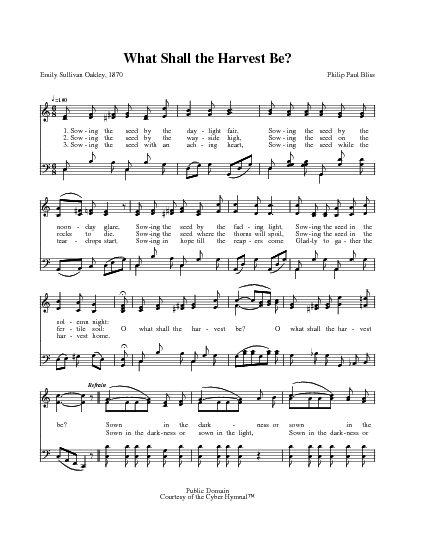 Sowing the seed by the daylight fair


Source: The Song Book of the Salvation Army #931

A graduate of Albany Female Academy in New York. Taught rhetoric, composition, and foreign languages there for 24 (or 25) years. Contributed to at least 11 magazines. Published a book of poetry, At the Foot of Parnassus.. Wrote the hymn, “Sowing the Seed” in 1850. Originally published in “a western paper,” altered as it traveled from hand to hand. Popularized by Ira Sankey. Published in Gospel Hymns and Songs. Frequently requested from Edison Records, and recorded by them in 1904. According to Sankey, she was “a frail, delicate woman, always an invalid,mnever having known, as she once said, an hour of health in all her life.” E. Adams Sources: Sankey, Ira D. My Life and Sacred Songs (1906), 138-143, 281-284. Moore, Wendell… Go to person page >
^ top

Two hymns,"I am so glad that our Father in heaven," and "Sowing the seed by the daylight [dawnlight] fair," (sometimes given as "Sowing our seed in the morning fair") are usually attributed to Mr. Bliss. In his Gospel Songs, Cincinnati, 1874, however, he lays claim to the music only. Mr. Sankey attributes this last to " E. A. Oakey." With the exception of No. 48, these hymns are given in Mr. Sankey's Sacred Songs & Solos, Pts. i. and ii. Their popularity is far beyond their literary merits, and is mainly due to the simple melodies to which they are wedded. As a writer of hymns of this class Mr. Bliss is second only to Mrs. Van Alstyne. Many anecdotes concerning hymns of this class are given in American Evangelists; an Account of their work in England and America, by the Rev. Elias Nason, Boston, U.S., Lathrop & Co., 1877.
Mr. Bliss is usually known as "P. P. Bliss." This is found on the title-pages of his collections. On his own authority, however, we are enabled to say that his name originally stood thus: “Philipp Bliss.” Early in life he separated the final p from his Christian name, constituted it a capital P, and thus produced "P. P. Bliss." (For this article we are mainly indebted to Professor F. M. Bird, and Mr. H. P. Main.)

[Sowing the seed by the daylight fair] (Bliss)

All tunes published with 'What Shall the Harvest Be'^ top 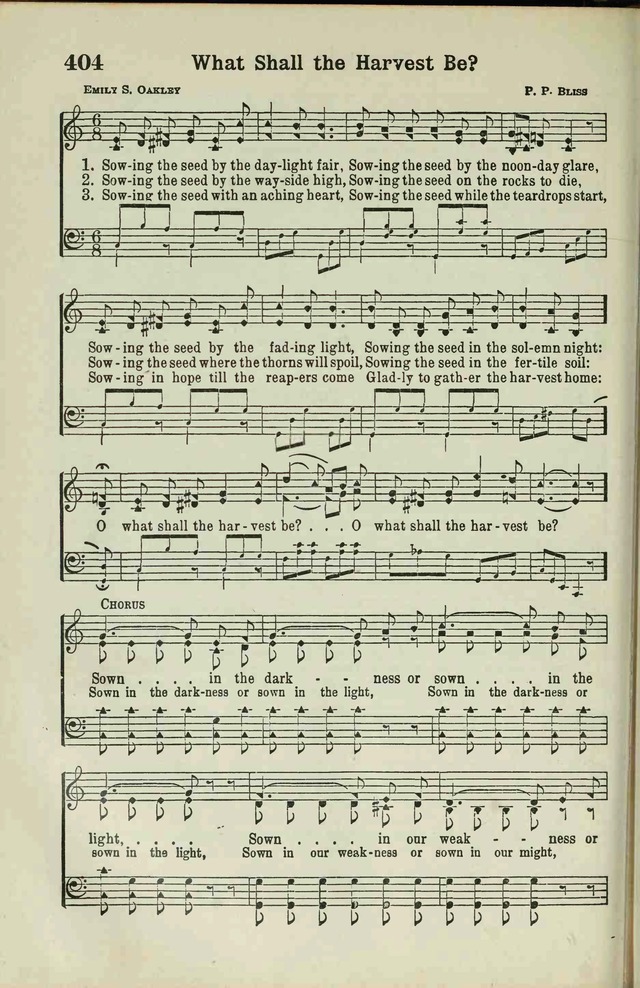 Sacred Selections for the Church #509

The Song Book of the Salvation Army #931

Display Title: Sown in the darkness or sown in the light First Line: Sowing the seed by the dawn-light fair Author: Emily Sullivan Oakey (1829-83) Date: 1986 Subject: Special Occasions | Harvest
The Song Book of the Salvation Army #931
Include 117 pre-1979 instances
All instances^ top
Suggestions or corrections? Contact us