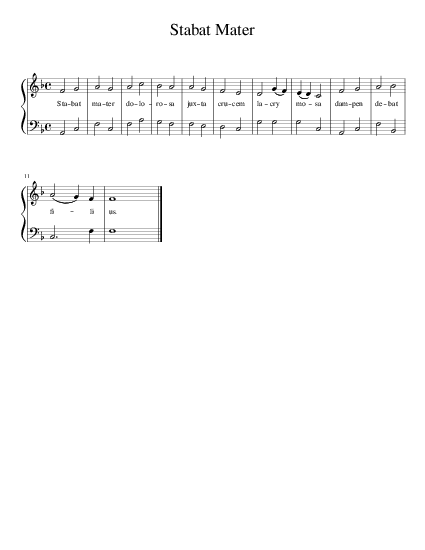 Source: Laudis Corona: the new Sunday school hymn book, containing a collection of Catholic hymns, arranged for the principal seasons and festivals of the year #54 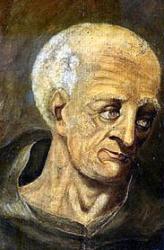 Jacobus de Benedictis, commonly known as Jacopone, was born at Todi in Umbria, early in the 13th century, his proper name being Jacopone di Benedetti. He was descended from a noble family, and for some time led a secular life. Some remarkable circumstances which attended the violent death of his wife, led him to withdraw himself from the world, and to enter the Order of St. Francis, in which he remained as a lay brother till his death, at an advanced age, in 1306. His zeal led him to attack the religious abuses of the day. This brought him into conflict with Pope Boniface VIII., the result being imprisonment for long periods. His poetical pieces were written, some in Italian, and some in Latin, the most famous of the latter being "Cur mundu… Go to person page >
^ top

Stabat mater dolorosa. Pope Innocent III.? [Passiontide. ] This noble poem (used both as a sequence and as a hymn) has been, not unjustly, styled the most pathetic hymn of the Middle Ages. The vividness with which it pictures the weeping Mother at the Cross, its tenderness, its beauty of rhythm, its melodious double rhymes almost defying reproduction in another language, and its impressiveness when sung either to the fine plain-song melody or in the noble compositions which many of the great masters of music have set to it, go far to justify the place it holds, and has long held, in the Roman Catholic Church. It was not indeed officially sanctioned for general use, or regularly incorporated in the Roman Breviary or Missal, till by decree of Pope Benedict XIII., in 1727; but long before that date it was in popular use, especially after the Flagellants in the 14th cent, had brought it into notice by singing it on their way from town to town. The passages of Holy Scripture on which it is based are St. John xix. 25; St. Luke ii. 35; Zech. xiii. 6; 2 Cor. iv. 10; and Gal. vi. 17.

For Pope Innocent III. there is, it must be confessed, little positive evidence. Pope Benedict XIV. (d. 1758), who had made Hymnology a special study, in his De festis Domini nostri Jesu Christi, Padua, 1758, ascribes it to Pope Innocent III.
For Jacobus de Benedictis (Jacopone) the evidence at first sight seems more probable. In the Bibliotheque Nationale at Paris there is a manuscript of the beginning of the 15th century, which formerly was catalogued as No. 7783, but now bears the press-mark "Fonds italien, No. 559." From a collation kindly, sent by M. Leopold Delisle, the Principal Librarian, it appears that the title of this manscript is "Incipiunt laudes quas fecit sanctus frater Jacobus de Tuderto, ordinis fratrum minorum," &c. The present writer, in view of all the evidence at his command, has come to the conclusion that it is exceedingly doubtful if Jacopone wrote any Latin hymns; or alternatively that he was merely an alterer or imitator of earlier compositions. It is almost impossible to believe that the person who wrote the "Stabat mater dolorosa" could also have written the "Stabat mater speciosa."

Although this Sequence was brought into notice by the Flagellants, and was well known at least as early as 1390, yet it only very gradually came into use in the services of the Church. It seems to have been added to the Breslau diocesan Missal shortly after 1414, and is found in the printed Breslau Missal of 1483. It is also in the Paris Missal of 1481, and various other Missals of the 15th century, but was not included in any of the English Missals.

The "Stabat mater dolorosa" is also worthy of note by reason of the frequency with which it has been set to music by the great composers, such as Palestrina, Pergolesi, Haydn, Rossini, and, more recently, Dvorak…It is also noteworthy on account of the very numerous translations in which it has passed into various European languages. Dr. F. G. Lisco, in his Stabat Mater, Berlin, 1843, prints 78 versions in German, to which list a good many more might now be added. The list of English translations is also large. The fact that so much of the hymn is directly addressed to the Blessed Virgin Mary has limited its use in hymnbooks outside those of the Roman Catholic Church. Perhaps the most skillful attempt to bring the hymn into greater harmony with Tim. ii. 5, is by J. S. B. Monsell, in his Parish Hymnal, 1873. [Rev. James Mearns, M.A.]

The translations of this poem into English are (1) of the full text, as in the Roman Missal and Breviary; and (2) of the stanzas as appointed for Vespers, and are:—

i. Roman Missal and Breviary text.
This text is thus divided:—

and is translated sometimes with these divisions, and again as one hymn, viz.:—
1.


At the Cross her station keeping. Vespers.
Holy Mother, pierce me through. Matins.
Virgin of all virgins best. Lauds.

In these divisions, or as one hymn, this translation is extensively used in Roman Catholic hymnbooks for Missions and Schools.
2.


Lo! her heart with anguish rending. Vespers.
This, 0 Holy Jesu, grant me. Matins.
King of saints, all saints out-shining. Lauds.

3. At the Cross her station keeping. This, in the Roman Catholic Hymns for the Year, n.d. [1867], is composed of two parts: Pt. i. being E. Caswall’s translation of the Vespers text, as above; and Pt. ii., "Fount of Love and holy sorrow," a translation, probably by Dr. Rawes (the editor), of the rest of the hymn.
4. Plunged in grief the Mother stood.
5. Sorrowful the Mother stood.
6. Close beneath the Cross that bore Him.
7. Stood the mournful Mother weeping.

ii. The Vespers text. Stabat Mater.
1. By the Cross sad vigil keeping, Stood the Mother, doleful, weeping. By Bishop. R. Mant, in the British Magazine, Oct. 1833, p. 397, in 5 stanzas of 6 lines, and signed "A."
2. By the Cross, sad vigil keeping, Stood the mourning [mournful] Mother weeping. This cento appeared in Murray'sHymnal, 1852, No. 50, in 5 stanzas of 6 lines.
3. By the Cross her station keeping. This, in the Sarum Hymnal, 1868; the Parish Hymn Book, 1863 and 1875; and Thring's Collection, 1882, is Murray's text; in each case with slightly differing alterations.
4. At the Cross her station keeping. This cento, as given in Hymns Ancient & Modern 1861 and 1875, is composed of 2 lines directly from Caswall, 21 lines directly or indirectly from Mant, through Murray, as above, and 7 lines by the compilers. Its proper designation, therefore, is “A cento, based upon Bishop Mant and E. Caswall, from Murray's Hymnal, 1852, somewhat altered."
5. By the Cross, in anguish sighing. This translation appeared in the Rugby School Psalms & Hymns, 1850 (probably before), No. 62, in 4 stanzas of 6 lines (ed. 1876, No. 105).
6. Near the Cross was Mary, weeping. By J. W. Alexander, in his work, The Breaking Crucible, and Other Translations, 1861; and in Laudes Domini, N. Y., 1884.
7. By the Cross her sad watch keeping.
8. By the Cross sad vigil keeping. This translation, in the Anglican Hymn Book, 2nd ed., 1871, is by R. C. Singleton, the Editor, based upon Bishop Mant; and can be distinguished by stanzas v., which begins, "Fountain of divine affection."
Other translations are:—
1. Forth pouring many a bitter tear. By "0," in the British Magazine, July 1833.
2. By the Cross in anguish weeping. By G. Rorison, in his Hymns & Anthems, 1851.
In addition to these metrical renderings of the Roman Missal and Breviary text, Mrs. Charles has, in her Voice of Christian Life in Son, 1858, p. 208, a prose tr. beginning, "The mournful mother stood tearful beside the Cross." There are also two or three metrical renderings by American writers, which we have been unable to verify. 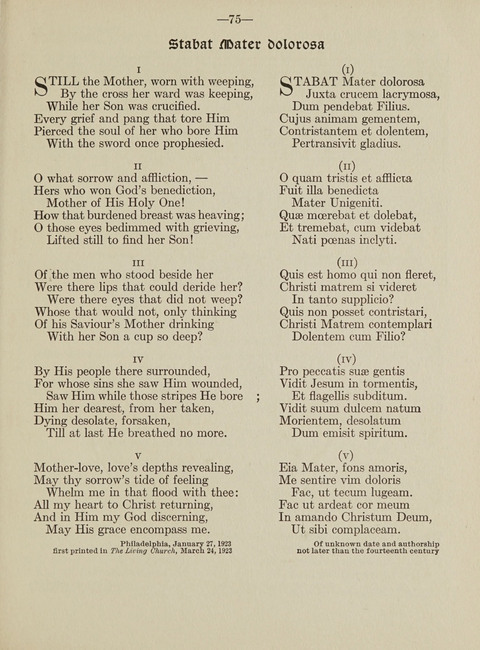 A Collection of Psalms, Hymns, Anthems, &c. to Which is Added the Rosary of the Blessed Virgin #d33

Display Title: A Hymn on the Sundays in Lent First Line: Stabat mater dolorosa Tune Title: [Stabat mater dolorosa] Date: 1788
A Compilation of the Litanies and Vespers Hymns and Anthems as they are sung in the Catholic Church adapted to the voice or organ #67

A Treasury of Catholic Song #50

A Treasury of Catholic Song #167

Catholic Church Hymnal with Music #230a

Catholic Church Hymnal with Music #230b

English and Latin Hymns, or Harmonies to Part I of the Roman Hymnal #145

Hosanna of the Little Ones #d40

Hymns for the Use of Catholic Catechists and Sunday Schools, for the Diocese of Cleveland #d56

Hymns, for the Use of the Catholic Church in the United States of America (New ed.) #42b

The Hymn Book of the New Sunday School Companion #d34

The Music of Holy Week, a Choir Book #d6