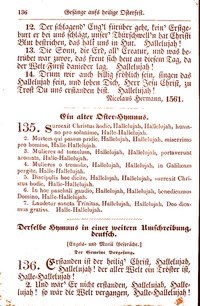 Surrexit Christus hodie. [Easter.] This hymn, or rather Easter Carol, exists in a great variety of forms. For the determination of the original text we have three manuscripts of the 14th century, viz., a Munich manuscript of the 14th century , cited by Mone, No. 143; a Prag manuscript of the 14th century, cited by G. M. Dreves in his Cantiones Bohemicae, No. 183, and an Engelberg manuscript of 1372 cited by Bäumker, i. p. 517.
Also see “Jesus Christ is risen today.” The translations from the Latin include:—
1. Today the Victor o'er His foes. By J. M. Neale, in his Mediaeval Hymns, 1851.
2. Lo! Christ is risen this day, and brings. J. W. Hewett, in his Verses by a Country Curate, 1859; and Lyra Messianica, 1864.
It has also often been translated into German. One of these translations has passed into English, viz.:—
Erstanden ist der heilige Christ. This is found in a great variety of forms. That which is translated is given by Wackernagel, ii. p. 737, from a broadsheet printed at Nürnberg, 1544, and is No. 135 in the Unverfälschter Liedersegen, 1851. It is in 19 stanzas of 2 lines with Hallelujah. Stanzas i.-vi. are narrative, vii.-xvii. a dialogue between Mary and the angel, xviii. Mary to the chorus, xix. the chorus. It is based on stanzas i.-viii., xi. of the Latin. This form probably originally formed part of an Easter play. Translated as: “Christ our Lord is risen today," in Lyra Davidica, l708, p. 12. [Rev. James Mearns, M.A.] 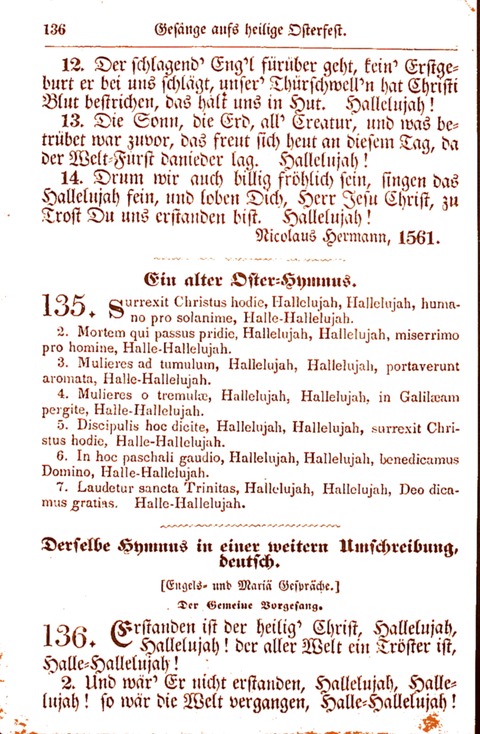