2 Hymns of praise then let us sing Alleluia!
unto Christ our heav'nly King, Alleluia!
who endured the cross and grave, Alleluia!
sinners to redeem and save. Alleluia!


3 But the pains which he endured, Alleluia!
our salvation have procured; Alleluia!
now above the sky he's King, Alleluia!
where the angels ever sing. Alleluia!

Lyra Davidica, or a Collection of Divine Songs and Hymns, partly new composed, partly translated from the High German and Latin Hymns; and set to easy and pleasant tunes. London: J. Walsh, 1708.

Of the history of this collection nothing is known, but the character of its contents may perhaps lead to the supposition that it was compiled by some Anglo-German of the pietist school of thought. The text in Lyra Davidica, 1708, p. 11, is as follows :—

"Jesus Christ is risen to day, Halle-Haile-lujah.
Our triumphant Holyday
Who so lately on the Cross
Suffer'd to redeem our loss.

“Hast ye females from your fright
Take to Galilee your flight
To his sad disciples say
Jesus Christ is risen to day.

“In our Paschal joy and feast
Let the Lord of life be blest
Let the Holy Trine be prais'd
And thankful hearts to heaven be rais'd."

…The oldest Latin text known is that given by Mone, No. 143, from a Munich manuscript of the 14th century. This manuscript does not contain stanzas 4, 6, 8, 10, 11 (enclosed in brackets above). Of these stanza 6,11 are found in a Breslau manuscript, cir 1478; and stanzas 4, 8, 10 in the Speier Gesang-Buch (Roman Catholic), 1600….
The modern form of the hymn appears first in Arnold's Compleat Psalmodist, 2nd edition, pt. iv., 1749, where the first stanza of 1708 is alone retained, and stanzas 2 and 3 are replaced by new ones written without any reference to the original Latin. This recast is as follows:—

Jesus Christ is ris'n to-day. Hallelujah.
Our triumphal holyday
Who did once upon the Cross
Suffer to redeem our Loss.

"Hymns of praises let us sing
Unto Christ our heavenly King
Who endur'd the Cross and Grave
Sinners to redeem and save.

"But the pain that he endured
Our Salvation has procured
How above the Sky he's King
Where the Angels ever sing."

Variations of this form are found in several collections. The following is in Kempthorne's Select Portions of Psalms, &c. 1810:—

"Jesus Christ is ris'n to day;
Now he gains triumphant sway;
Who so lately on the cross
Suffer'd to redeem our loss.
Hallelujah.

"Hymns of praises let us sing,
Hymns to Christ our heav'nly King,
Who endur'd both cross and grave,
Sinners to redeem and save.
Hallelujah.

"But the pains, which he endur'd,
Our salvation have procur'd;
Now He reigns above the sky,
Where the angels ever cry
Hallelujah."

”Jesus Christ is risen to-day,
Our triumphant holy day;
Who did once, upon the cross,
Suffer to redeem our loss.
Hallelujah,

"Hymns of praise then let us sing
Unto Christ our heavenly King:
Who endur'd the cross and grave,
Sinners to redeem and save.
Hallelujah.

“But the pains which He endur'd
Our salvation hath procur'd:
Now above the sky He's King,
Where the angels ever sing.
Hallelujah."

To this has been added by an unknown hand the following doxology:—

"Now be God the Father prais'd,
With the Son from death uprais'd,
And the Spirit, ever blest;
One true God, by all confest.
Hallelujah."

This doxology, from Schaff’s Christ in Song, 1870, p. 198, is in the Hymnal Companion and one or two other collections.
Another doxology is sometimes given, as in Lord Selborne's Book of Praise, 1862, Taring's Collection, 1882, and others, as follows:—

This is by C. Wesley. It appeared in the Wesley Hymns & Sacred Poems, 1740, p. 100; again in Gloria Patri, &c, or Hymns to the Trinity, 1746, and again in the Poetical Works, 1868-72, vol. iii. p. 345.
The above text from Tate and Brady's Supplement, cir. 1816, is that adopted by the leading hymn-books in all English-speaking countries, with in some cases the anonymous doxology, and in others with that by C. Wesley. It must be noted that this hymn sometimes begins:—
“Christ the Lord, is risen to day
Our triumphant holy day."

"Christ the Lord, is risen to-day,
Christians, haste your vows to pay:"
a translation of "Victimae Paschali” (q. v.), by Miss Leeson; and,

“Christ the Lord, is risen to-day,
He is risen indeed:"
by Mrs. Van Alstyne (q. v.).
Another arrangement of "Jesus Christ is risen to-day " is given in T. Darling's Hymns, &c, 1887. This text is stanza i., ii., Tate & Brady Supplement, with a return in stanza i. lines 3, to the older reading; and stanzas iii., iv. by Mr. Darling.
It may not be out of place to add, with reference to this hymn, that the tune to which it is set in Arnold, and to which it is still sung, is that published with it in Lyra Davidica. The tune is also anonymous, and was probably composed for the hymn. The ascription of it by some to Henry Carey is destitute of any foundation whatever, while Dr. Worgan, to whom it has been assigned by others, was not born until after the publication of Lyra Davidica. [George Arthur Crawford, M.A.]

EASTER HYMN originally appeared in the John Walsh collection Lyra Davidica (1708) as a rather florid tune. Tempered to its present version by John Arnold in his Compleat Psalmodist (1749), EASTER HYMN is now one of the best and most joyous Easter tunes. Composed by Paul Sjolund (b. Minneapolis, MN,…

All tunes published with 'Jesus Christ is Risen Today'^ top 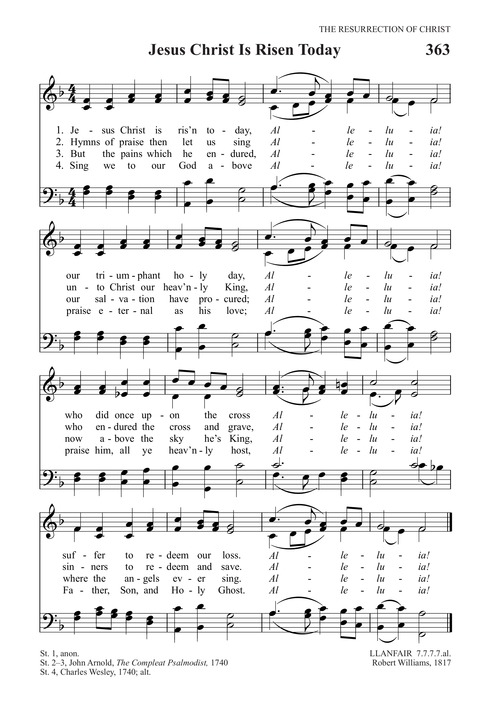 Hymns for a Pilgrim People #195