The First Nowel the Angel Did Say

The first Nowell, the angel did say

1 The first Nowell the angel did say
was to certain poor shepherds in fields as they lay,
in fields where they lay keeping their sheep,
on a cold winter’s night that was so deep.


2 They looked up and saw a star
shining in the east beyond them far;
and to the earth it gave great light,
and so it continued both day and night. [Refrain]


3 And by the light of that same star
three wise men came from country far;
to seek for a king was their intent,
and to follow the star wherever it went. [Refrain]


4 This star drew nigh to the northwest;
o’er Bethlehem it took its rest,
and there it did both stop and stay,
right over the place where Jesus lay. [Refrain]


5 Then entered in those wise men three,
full reverently upon their knee,
and offered there in his presence
their gold, and myrrh, and frankincense. [Refrain]


6 Then let us all with one accord
sing praises to our heavenly Lord,
that hath made heaven and earth of nought,
and with his blood our life hath bought. [Refrain]

This carol tells a story loosely based on the Gospel accounts in Luke 2 and Matthew 2 of the events surrounding Jesus' birth, with the shepherds, the star, and the wise men. The first two lines of the final stanza calls us to action – as the wise men reverently worshiped the Christ, so we should “with one accord sing praises to our heavenly Lord.” The last two lines recall that our Lord is the Creator and the Savior of the world.

This carol is an anonymous folk song, probably from the seventeenth century. Its text was first printed in nine stanzas by Davies Gilbert in Some Ancient Christmas Carols (1823). Most modern hymnals use six of these nine stanzas, eliminating the fifth, seventh, and ninth from Gilbert's text. The second stanza is historically inaccurate, because it implies that the shepherds followed the star, while it was actually the wise men. Most hymnals leave this stanza intact, but a few correct the first line or omit the whole stanza to avoid this issue. Otherwise, the biggest discrepancy is in the spelling of “Noel.” The English form is “Nowell,” which is retained in about half the hymnals. The other half use the French form “Noel.” Whichever form is used, the word ultimately derives from the Latin “natalis,” meaning “birth.”

While the tune THE FIRST NOEL is also a folk song, it did not appear in print until William Sandys's Christmas Carols, Ancient and Modern in 1833, with this text. According to Alan Luff, the melody may come from Cornwall, England, because Sandys transcribed it there, and because two other songs from that region are quite similar (The Hymnal 1982 Companion, vol. 3A, p. 223). The standard harmonization is from Stainer and Bramley's Christmas Carols New and Old, published in 1871.

The two eight-bar phrases of the melody are duplicates. The eight bars of the refrain repeat most of the same material. The third and fourth bars of the refrain melody depart from that of the verse, enlivened by the ascending thirds of the tenor and bass in the standard harmonization. Because there are four to six stanzas in most hymnals, with a very repetitious tune, it is important to incorporate some variety in the singing. The first and sixth stanzas should be sung by the entire assembly, but the choir and the men and women of the assembly could each sing one or two of the intervening stanzas. Try singing the sixth stanza in unison to emphasize “with one accord” with an alternate harmonization in the accompaniment.

Though this popular carol is often used for Christmas, its narrative is better suited to Epiphany. It makes a good choice for an Epiphany processional, or it could be used as a prelude in the absence of a processional. “The First Noel” is also used frequently in Christmas musicals and carol suites such as “A Christmas Carol Gallery,” where it is part of the third suite. For congregational use, a variety of instruments can be used to accompany the singing. Piano and handbells accompany the congregational setting of this hymn found in “Christmas Carol Celebrations,” and another congregational setting of “The First Nowell” has organ and trumpet accompaniment.

One potential problem with this tune is its repetitiveness, which can be resolved by rhythmic alterations, as in the handbell setting, “Nowell Celebration.” Mark Kellner's arrangement of “The First Noel” for SAB choir and electric keyboard accompaniment is set to an original melody based on the traditional one. 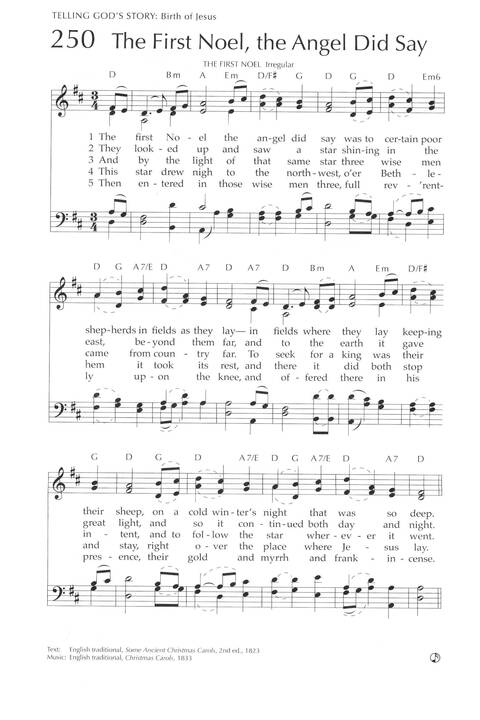 Great Songs of the Church (Revised) #208

Hymns for a Pilgrim People #108

Hymns of the Christian Life #61

The Hymnal for Worship and Celebration #136

The Song Book of the Salvation Army #90