The foe behind, the deep before 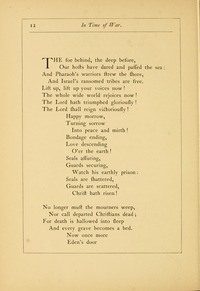 The foe behind, the deep before

The foe behind, the deep before,
Our hosts have dared and passed the sea;
And Pharaoh's warriors strew the shore,
And Israel's ransomed tribes are free.
Lift up, lift up your voices now!
The whole wide world rejoices now!
The Lord hath triumphed gloriously!
The Lord shall reign victoriously!
Happy morrow,
Turning sorrow
Into peace and mirth!
Bondage ending,
Love descending
O'er the earth!
Seals assuring,
Guards securing,
Watch His earthly prison:
Seals are shattered,
Guards are scattered,
Christ hath risen!


No longer must the mourners weep,
Nor call departed Christians dead;
For death is hallowed into sleep
And every grave becomes a bed.
Now once more
Eden's door
Open stands to mortan eyes;
For Christ hath risen, and men shall rise,
Now at last,
Old things past,
Hope and joy and peace begin:
For Christ has won, and man shall win.


It is not exile, rest on high;
It is not sadness, peace from strife:
To fall asleep is not to die;
To dwell with Christ is better life.
Where our banner leads us,
We may safely go;
Where our Chief precedes us,
We may face the foe.
His right arm is o'er us,
He will guide us through;
Christ hath gone before us:
Christians, follow you!

The foe behind, the deep before. J. M. Neale. [Easter Carol.] This carol for Easter was published in his Carols for Eastertide, 1854, p. 55, in 12 stanzas. It is found in several modern hymn-books, but usually in an abbreviated form. It reads like an Ode from a Greek Canon, and is sometimes taken for one. As Dr. Neale translated the Canon for Easter by St. John of Damascus, "Tis the day of resurrection" in 1853, and this Carol for Easter was published in 1854, it is not improbable that the direct source of inspiration was the Greek of St. John, although many of Neale's carols for Eastertide are “free imitations" of Latin Sequences.

The foe behind, the deep before, p. 1148, ii. The melody in Dr. Neale's Carols for Eastertide, 1854, No, xxii., is taken from the Piae Cantiones, 1582 (p. 211, ii.), where it is set to "Auctor humani generis"; the part used beginning at the words "Sic morte mortem destruis." Dr. Neale only takes a few phrases from the Latin, and his Carol is practically original. [Rev. James Mearns, M.A.]


THE FOE BEHIND (Barnicott)

All tunes published with 'The foe behind, the deep before'^ top 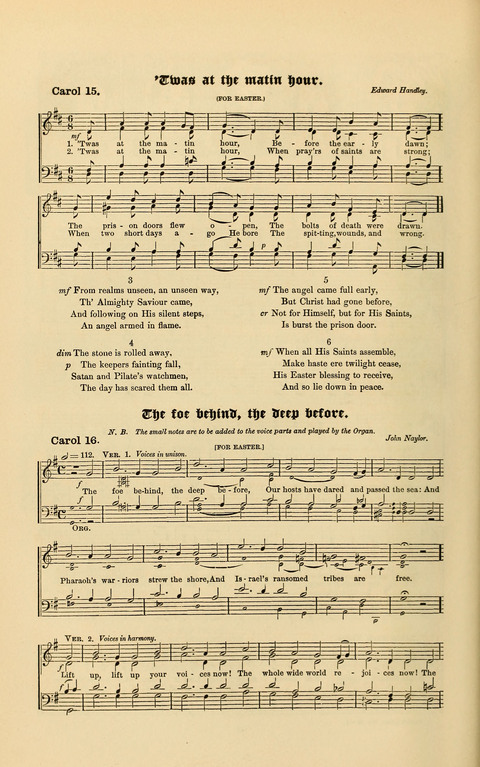 View Page
Carols Old and Carols New: for use at Christmas and other seasons of the Christian year (1916), p.14
^ top

A Church of England Hymn Book #185

Hymns of the Living Church #146

The Chautauqua Hymnal, a Collection of Hymns for Gatherings ... and Young Peoples Organizations #d77

The Chautauqua Hymnal, a Collection of Hymns for Gatherings ... and Young Peoples Organizations #ad77

The Church Hymnal with Canticles #545

The Evangelical Hymnal with Tunes #594

The Methodist Hymn-Book with Tunes #218