The sinner that truly believes 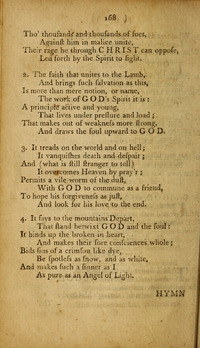 The sinner that truly believes

1 The sinner that truly believes,
And trust in his crucified Lord,
His justification receives,
Redemption in full through his blood;
Though thousands and thousands of foes
Against him in malice unite,
Their rage he through Christ can oppose,
Led forth by the Spirit to fight.


2 Not all the delusions of sin
Shall ever seduce him to death;
He now has the witness within,
United to Jesus by faith,
This faith shall eternally fail,
When Jesus shall fall from his throne:
For hell against both must prevail,
Since Jesus and he are but one.


3 The faith that lays hold on the Lamb
And brings such salvation as this,
Is more than mere notion or name:
The work of God's Spirit it is:
A principle, active and young,
That lives under pressure and load;
That makes out of weakness more strong,
And draws the soul upward to God.


4 It treads on the world, and on hell,
It vanquishes death and despair,
And (what is still stranger to tell)
It overcomes heaven by pray'r:
Permits a vile worm of the dust,
With God to commune as a friend
To hope his forgiveness as just,
And look for his love to the end.


3 It says to the mountains, "Depart,"
That stand betwixt God and the soul;
It binds up the broken in heart,
And makes their sore consciences whole;
Bids sins of a crimson-like dye
Be spotless as snow, and as white;
And proves such a sinner as I
As pure as an angel of light.

Source: Hymn and Tune Book for Use in Old School or Primitive Baptist Churches #198

A Baptist Hymn Book, Designed Especially for the Regular Baptist Church and All Lovers of Truth #d718

A Choice Collection of Hymns, in which are some never before printed #141

A Collection of Evangelical Hymns; made from Different Authors and Collections for the English Lutheran Church in New York #d228

A Collection of Hymns and Spiritual Songs, Generally Used at Camp and Prayer Meetings #d210

A Collection of Hymns, intended for the use of the citizens of Zion, whose privilege it is to sing the high praises of God, while passing through the wilderness, to their glorious inheritance above. #126

Display Title: Saving Faith First Line: The sinner that truly believes Date: 1835
A Collection of Hymns, intended for the use of the citizens of Zion, whose privilege it is to sing the high praises of God, while passing through the wilderness, to their glorious inheritance above. #126

A New Selection of Hymns; designed for the use of conference meetings, private circles, and congregations, as a supplement to Dr. Watts' Psalms and Hymns #296

A New Selection of Nearly Eight Hundred Evangelical Hymns, from More than 200 Authors in England, Scotland, Ireland, & America, including a great number of originals, alphabetically arranged #296a

A New Selection of Psalms, Hymns and Spiritual Songs #702

A New Selection of Seven Hundred Evangelical Hymns ... intended as a Supplement to Dr. Watts's Psalms and Tunes #296

A Pastor's Selection of Hymns and Tunes #345

A Selection of Hymns and Spiritual Songs #d201

A Selection of Hymns and Spiritual Songs #S.LI

A Selection of Hymns and Spiritual Songs #S.LI

A Selection of Hymns from the Best Authors, intended to be an Appendix to Dr. Watts' Psalms & Hymns. 2nd Baltimore ed. #aCCXXII

A Selection of Hymns from the Best Authors. #222

A Selection of Hymns, from the Best Authors, Designed as a Supplement to Dr. Watts' Psalms and Hymns #d601

A Selection of Hymns #CCXXII

Divine Hymns or Spiritual Songs, for the use of religious assemblies and private Christians #LIX

Hymns for Schools and Families #d143

Hymns for Schools and Families #62

Hymns for Youth, Suitable to be Used in Sabbath and Parochial Schools #112

Hymns of the Church Militant #467

Old School Sonnets, or a Selection of Choice Hymns #d247

Psalms and Hymns Adapted to Social, Private and Public Worship in the Presbyterian Church in the U.S.A. #d806

Psalms and Hymns, for the Use of the German Reformed Church, in the United States of America. (2nd ed.) #229

Display Title: Victorious faith First Line: The moment a sinner believes Meter: 8s. Date: 1834 Subject: Faith |
Psalms and Hymns, for the Use of the German Reformed Church, in the United States of America. (2nd ed.) #229

Select Hymns from Other Authors, Selected Harmony Together with Directions for Musical Expression. 2nd ed. #a43

Songs of Zion, Being a New Selection of Hymns, Designed for Revival and Social Meetings #113

The Ebenezer Selection of Hymns and Spiritual Songs, with an appendix Consisting of Miscellaneous Pieces. 6th ed. #d533

The Hartford Selection of Hymns from the most approved authors to which are added, a number never before published. #125

The Hartford Selection of Hymns from the Most Approved Authors #CXXV

The Hartford Selection of Hymns #CXXV

The Psalms and Hymns, with the Catechism, Confession of Faith, and Liturgy, of the Reformed Dutch Church in North America #133

The Psalms and Hymns, with the Doctrinal Standards and Liturgy of the Reformed Protestant Dutch Church in North America #H334

The Service of Song for Baptist Churches #d854

Display Title: Victorious Faith First Line: The moment a sinner believes Date: 1878
The Song Victor for the Sunday School and Public School Use #74