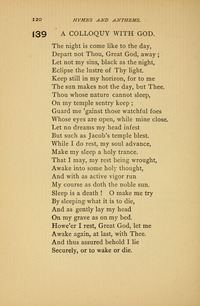 Browne, Sir Thomas, born in St. Michael's, Cheapside, London, Oct. 19, 1605, and educated at Winchester, and at the Hall now known as Pembroke College, Oxford, graduating B.A. in 1626. He practised as a physician in Oxfordshire, Shipden Hall, near Halifax, Yorkshire, and at Norwich. In 1671 he was knighted by Charles II. at Norwich, and died there, Oct. 10, 1682. He wrote numerous scientific, antiquarian, and other works, including Religio Medici, 1642, and others, republished in Bonn's Library. The Religio Medici has been edited in the Golden Treasury series, Macmillan, 1882, with great fulness of detail. He is known principally to hymnology through his fine hymn, "The night is come; like to the day." -- John Julian, Dictionary of Hymno… Go to person page >
^ top

The night is come; like to the day. Sir T. Browne. [Evening.] First published in the 1642 edition of his Religio Medici, Pt. ii., § 12, and is thus introduced in speaking of sleep:—

"It [sleep] is that death which we may be literally said to die daily; a death which Adam died before his mortality; a death whereby we live a middle and moderating point between life and death. In fine so like death I dare not trust it without my prayers and an half adieu unto the world, and take my farewell in a colloquy with God:—
“The night is come; like to the day," &c. [extending to 30 lines]. "This is the dormitive I take to bedward; I need no other laudanum than this to make me sleep; after which I close mine eyes in security, content to take my leave of the sun, and sleep unto the resurrection."

From the above-named 30 lines, the cento in common use has been compiled. It is also sometimes given in an altered form as "The sun is gone: like to the day," as in Baptist Psalms & Hymns, 1858. Original text in The Camelot Classics, London, W. Scott, 1886.

All tunes published with 'The night is come, like to the day'^ top 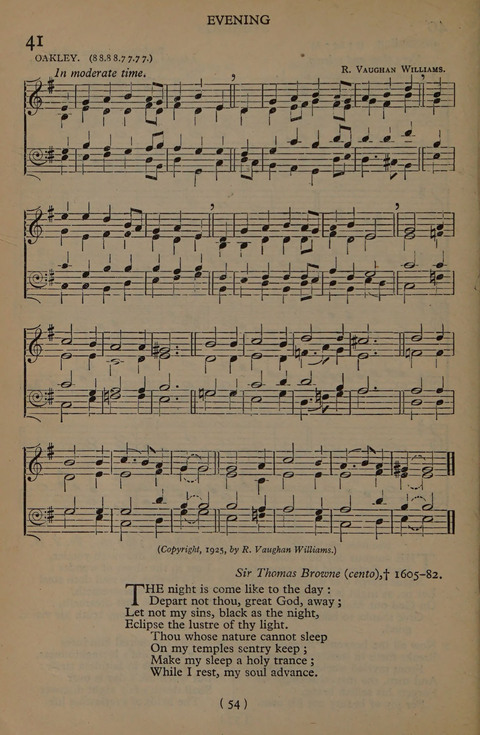 Songs of Praise #41a

Songs of Praise #41b