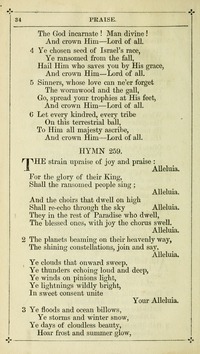 The strain upraise of joy and praise, Alleluia


(Unison)
8 Now from all men be outpoured
Alleluia to the Lord,
With Alleluia evermore,
The Son and Spirit we adore.
(Harmony)
Praise be done to the Three in One,
Alleluia!
Alleluia! Alleluia!

Source: The Hymnal, Revised and Enlarged, as adopted by the General Convention of the Protestant Episcopal Church in the United States of America in the year of our Lord 1892 #461

Notker Balbulus, so called from his slight stuttering, was born in Switzerland about 840. Ekkehard V. in the 2nd Chapter of his Vita Sancti Notkeri (written about 1220), says he was born at Heiligau, now Elgg, in the Canton of Zurich; but Meyer von Knonau, seeing that his family were closely connected with Jonswil in the Canton of St. Gall, thinks that Notker was probably born at Jonswil. He entered the school of the famous Benedictine Abbey of St. Gall at an early age, and spent the rest of his life there. In due course he was admitted as one of the brethren of the monastery; in 890 is marked as librarian, and in 892 and 894 as guestmaster (hospitarius); his principal employment being in scholastic and literary work. He became eventually o… Go to person page >

Cantemus cuncti melodum nunc, Alleluia. [Epiphany.] This Sequence is given by Father Joachim Brander (a monk of the Abbey of St. Gall), in his manuscript collection of Hymns, Sequences, &c, 1507. Brander gives the following description, “Alia de Epiphania Christi Sequentia jocunda b. Notkeri, titulis Puella turbata. Canitur praecipue in Octava Epiphaniae," ("Another joyful Sequence of Blessed Notker's [died 912] for the Epi¬phany of Christ, with the title: The troubled Virgin. It is sung especially in the octave of the Epiphany.”) The title Puella turbata, "The troubled (or disturbed) Virgin," has caused some difficulty as to what may be its meaning; but for its use we may refer to St. Matthew ii. 3, Jerusalem being termed the Virgin daughter of Sion; the troubling there mentioned occurring at the season of the Epiphany. The words of the hymn are modelled on those of the 148th Psalm.
The text is given in Mone, No. 67; Daniel, ii. p. 52; and Kehrein, No, 44, in each case with notes, and extensive readings from ancient manuscripts, the oldest being of the 11th century, and referred to by Daniel. In addition the text is also in an 11th century manuscript in the British Museum (Hurl. 2961, f. 234 6), and in three 11th century manuscripts at St. Gall, Nos. 376, 380, 381.
In his Mediaevel Hymns, 1863, p. 34, Dr. Neale says, "Next to St. Notker himself, the most famous writer of the Proses named from him was Godescalcus," and at p. 42 of this Sequence, "We shall have another occasion to speak of the 'Deposition of Alleluia' at Septuagesima, for which this famous Sequence was written by Godescalcus." Brander, Daniel, and Kehrein all declare that the Sequence is by St. Notker. For Dr. Neale's ascription to Godescalcus we find no evidence, and must thus assign the Sequence to St. Notker. [W. A. Shoults, B.D.]
Translations in common use:—
1. The strain upraise of joy and praise, Alleluia. By J. M. Neale, appeared in the Hymnal Noted, enlarged edition, 1854, and in his Mediaeval Hymns, 2nd ed., 1863; it has passed into almost every hymnal published since that date. In the 2nd edition of his Mediaeval Hymns, 1863, Dr. Neale gives the history of its somewhat peculiar construction, and complains most bitterly of its being sung to Troyte's chant. He says:—

"There is only one thing with respect to the use of any of my hymns that has grieved me: the rejection of the noble melody of the Alleluiatic Sequence, and that for a third-rate chant. What would be said of chanting the Dies irae? And yet I really believe it would suffer less than does the Cantemus cuncti by such a substitution. Further be it noticed, every sentence, I had almost said every word, of the version was carefully fitted to the music, the length of the lines corresponds to the length of each troparion in the original; and these are now stretched on the Procrustean bed of the same meaningless melody. That the original music cannot be learnt in an hour or two is most certain; but seeing that I have heard it thoroughly well sung, and most heartily enjoyed, by a school choir, varying in ages from fourteen to five, is it not unworthy of the great choral meetings, as at Ely, Salisbury, Sherborne, and elsewhere, including the words in their programmes, so utterly to spoil them in their performance,? Let it be remembered that I have some little right to speak on the subject, having been the first to introduce the Sequence to English readers, and there being, even now, no other translation but my own." (Preface, p. ix.)

Notwithstanding this earnest protest of the translator, the original melody is practically unknown. It is included in the Hymnal Noted with the accompanying Harmonies. The adaptation from Dr. Neale's translation in the Hymnary, 1872, No. 189: "In sweet consent let all the anthem sing, Alleluia," cannot be called a new rendering of the Sequence. 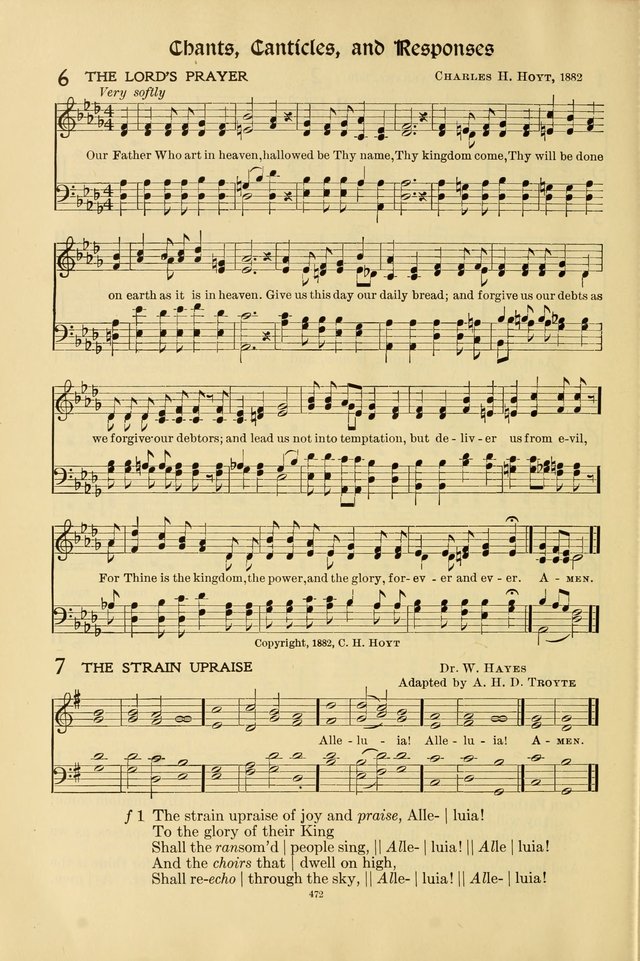 A Church of England Hymn Book #424

Additional Hymns set forth by the House of Bishops at the request of the House of Clerical and Lay Deputies, in General Convention, October 1865; to be used in the congregations of the Protestant Ep.. #259

Great Hymns of the Middle Ages #41

Hymns for the Reformed Church in the United States #199

Hymns of the Living Church #46

Selections from the Psalms of David in Metre #H259

Songs of the Christian Life #CCR7

The Beacon Song and Service book #73

The Book of Common Praise #637

The Book of Common Praise #185

The Book of Worship #3

The Church Hymnal with Canticles #425

The Church Porch, a service book and hymnal for Sunday schools Rev. Ed. #122

The Churchman's Hymn-Book, a Collection of Hymns Old and New, for Use in the Services of the Church #d379

The Hymnal Companion to the Book of Common Prayer with accompanying tunes (3rd ed., rev. and enl.) #585

The Hymnal for Schools #d177

The Hymnal, Revised and Enlarged, as adopted by the General Convention of the Protestant Episcopal Church in the United States of America in the year of our Lord 1892 #461

The Hymnary for use in Baptist churches #767

The Hymnary of the United Church of Canada #767

The Hymns for the Use of Evangelical Lutheran Congregations #d471

The Methodist Hymn-Book with Tunes #C4

The Sunday-School Hymnal and Service Book (Ed. A) #323

The Trinity Hymnal, with Offices of Devotion #d74