There Were Ninety and Nine 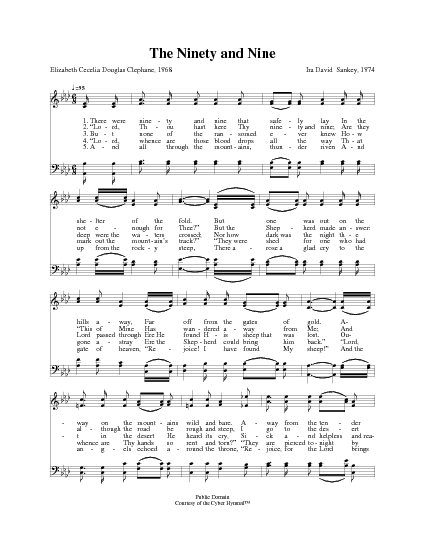 There were ninety and nine that safely lay Clephane, Elizabeth Cecilia, third daughter of Andrew Clephane, Sheriff of Fife, was born at Edinburgh, June 18, 1830, and died at Bridgend House, near Melrose, Feb. 19, 1869. Her hymns appeared, almost all for the first time, in the Family Treasury, under the general title of Breathings on the Border. In publishing the first of these in the Treasury, the late Rev. W. Arnot, of Edinburgh, then editor, thus introduced them:— "These lines express the experiences, the hopes, and the longings of a young Christian lately released. Written on the very edge of this life, with the better land fully, in the view of faith, they seem to us footsteps printed on the sands of Time, where these sands touch the ocean of Eternity. These footprints of one… Go to person page >
^ top

There were ninety and nine that safely lay. Elizabeth C. Clephane. [The Lost Sheep.] This beautiful poem was probably written in 1868 at Melrose, where the authoress then resided, and first published in 1868, in a small magazine for the young, entitled, The Children's Hour, pt. ii. p. 15, in 5 stanzas of 6 lines. Subsequently it appeared as No. 8 of the series of her hymns entitled Breathings on the Border, in the Family Treasury, 1874, p. 595. Thence it was copied into the Christian Age, May 13, 1874, where it was seen by Mr. I. D. Sankey, who set it to music and sang it with great effect at his gospel meetings. He included it in 1875 in his Sacred Songs and Solos. It has since appeared in England, in the Hymnal Companion, 1876; Thring's Collection 1882; Baptist Psalms & Hymns Supplement, 1880, &c., and in America in the Evangelical Association Hymn Book, Cleveland, 1882, and other collections. It is rapidly attaining a foremost position among modern hymns. [Rev. James Mearns, M.A.]

[There were ninety and nine that safely lay] (Sankey)

All tunes published with 'There Were Ninety and Nine'^ top 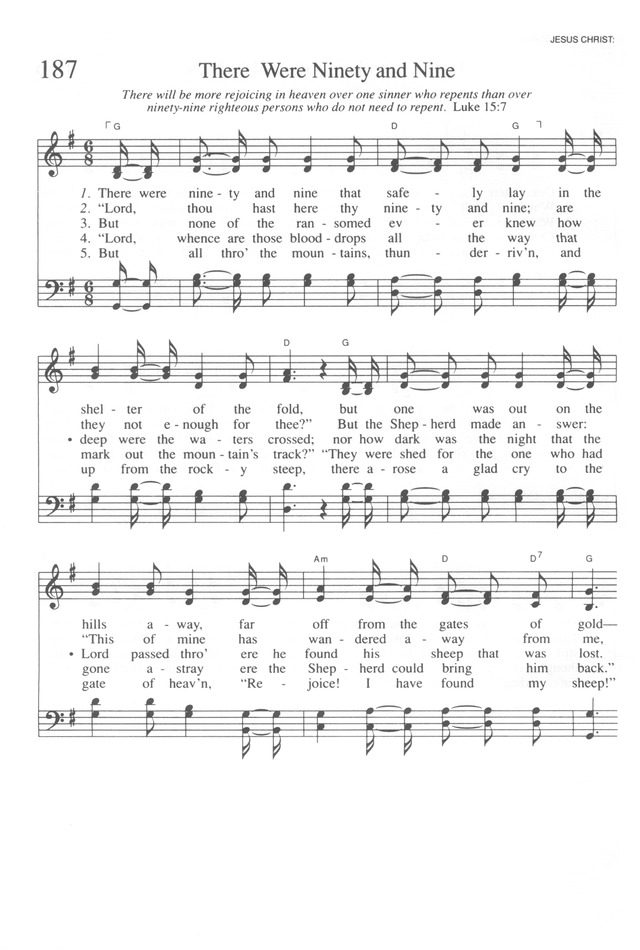 Hymns of the Christian Life #536

Sacred Selections for the Church #560