Thou, who breakest ev'ry chain

Thou who breakest every chain

Thou, who breakest ev'ry chain,
Thou who still art ever near,
Thou with whom disgrace and pain
Turn to joy and heav'n e'en here;
Let Thy further judgments fall
An the Adam strong within,
Till Thy grace hath freed us all
From the prison-house of sin.


'Tis Thy Father's will towards us
Thou shouldst end Thy work at length;
Hence in Thee are centred thus
Perfect wisdom, love, and strength,
That Thou none shouldst lose of those
Whom He gave Thee, though they roam
'Wilder'd here amid their foes,
Thou shouldst bring them safely home,


Look upon our bonds, and see
How doth all creation groan
'Neath the yoke of vanity,
Make Thy full redemption known.
Still we wrestle, cry, and pray,
Held in bitter bondage fast,
Though the soul would break away
Into higher things at last.


Lord, we do not ask for rest
For the flesh, we only pray
Thou wouldA do as seems Thee best,
Ere yet comes our parting day;
But our spirit clings to Thee,
Will not, dare not, let Thee go,
Until Thou have set her free
From the bonds that cause her woe.


Ours the fault it is, we own,
We are slaves to self and sloth,
Yet oh leave us not alone
In the living death we loathe!
Crush'd beneath our burden's weight,
Crying at Thy feet we fall,
Point the path, though steep and strait,
Thou didst open once for all.


Ah how dearly were we bought
Not to serve the world or sin;
By the work that Thou hast wrought
Must Thou make us pure within,
Wholly pure and free,--in us
Be Thine image now restored:
Fill'd from out Thy fulness thus
Grace for grace on us is pour'd.


Draw us to Thy cross, O Love,
Crucify with Thee whate'er
Cannot dwell with Thee above;
Lead us to those regions fair!
Courage! long the time may seem,
Yet His day is coming fast;
We shall be like them that dream
When our freedom dawns at last. 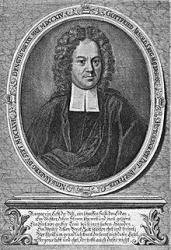 Arnold, Gottfried, son of Gottfried Arnold, sixth master of the Town School of Annaberg in the Saxon Harz, born at Annaberg Sept. 5, 1666. His life was varied and eventful, and although much of it had little to do with hymnody from an English point of view, yet his position in German Hymnology is such as to necessitate an extended notice, which, through pressure of space, must be (typographically) compressed. After passing through the Town School and the Gymnasium at Gera, he matriculated in 1685 at the University of Wittenberg—where he found the strictest Lutheran orthodoxy in doctrine combined with the loosest of living. Preserved by his enthusiasm for study from the grosser vices of his fellows, turning to contemplate the lives of t… Go to person page >

O Durchbrecher aller Bande. G. Arnold. [Sanctification.] First published in his Göttliche Liebes-Funcken. Frankfurt am Main, 1698, No. 169, in 11 stanzas of 8 lines, entitled ”The Sigh of the Captive." Included in the Geistreiches Gesang-Buch, Darmstadt, 1698, p. 498, in Freylinghausen's Gesang-Buch, 1704, and many later collections, as the Unverfälschter Liedersegen, 1851, No. 326. Also in Ehmann's edition of Arnold's Geistlische Lieder, 1856, p. 81, and Knapp's edition, 1845, p. 202. It is Arnold's finest church hymn, and is a very characteristic expression of the Pietistic views regarding the conflict between the old and the new man. Lauxmann, in Koch, viii., 432-434, says of it:—

"In this hymn the poet powerfully expresses his inmost emotions under the many conflicts he had with his heart. . . It is a true daily hymn of supplication for earnest Christians who have taken the words of the Apostle 'Follow. . . .the sanctification without which no man shall see the Lord' (Heb. xii. 14) as the rule and standard of their lives. Many such might often rather sigh it out than sing it."

All tunes published with 'Thou, who breakest ev'ry chain'^ top