Lord Lead Me On

When the way seems dark and long 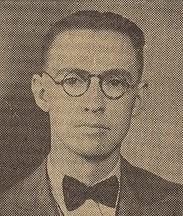 Born: March 12, 1910, Clanton, Alabama. Died: December 10, 1989, Birmingham, Alabama. Buried: Martin Memorial Cemetery, Clanton, Alabama. Marion W. Easterling, composed over 300 southern gospel songs. He received his music education in various singing schools, being taught by Ocie Lee DeVaughan, Dad Speer and others. In 1938, he was the youngest composer to sign a five year contract with the Stamps-Baxter Publishing Company. He has been listed in the Guinness Book of World Records for his long career as the programmer for the WKLF Radio stations's gospel program "America's Favorites". The program began in December 1947 and continued for 39 years, during which time, he broadcast over 20,000 shows. --www.findagrave.com/  Go to person page >
^ top

[When the way seems dark and long]

All tunes published with 'Lord Lead Me On'^ top