Who hath believed thy sacred word 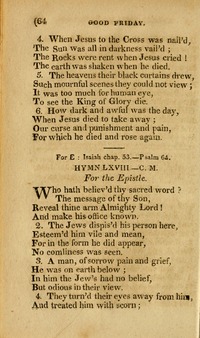 Who hath believed thy sacred word

1 Who hath believ'd thy sacred word?
The message of thy Son,
Reveal thine arm Almighty Lord!
And make his office known.


2 The Jews dispis'd his person here,
Esteem'd him vile and mean,
For in the form he did appear,
No comliness was seen.


3 A man, of sorrow pain and grief,
He was on earth below;
In him the Jew's had no belief,
But odious in their view.


4 They turn'd their eyes away from him,
And treated him with scorn;
He suffered pain and grief for them,
Their sorrows he hath born.


5 The Lord in justice pleas'd to bruise,
Him, though his only son;
He suffered for the stubborn Jews,
And Nations yet unknown,


6 Like wand'ring sheep we ran astray,
And left the fold of God,
Each wand'ring in the crooked way.
And in the downward road.


7 But all our sins on hin were laid,
We by his wounds are heal'd;
God's vengence on the Shepherd's head.
Is our redemption seald.


8 Ten thousand captive souls enslav'd
And doom'd to endless pain;
Are from their graves and prisons sav'd,
And brought to God again.


9 His joyful soul shall ever see!
The purchase of his blood!
Great numbers justified shall be,
And reconcil'd to God.


10 His honor's, life and ev'ry breath
For sinners then he gave
Was like the wicked in his death,
And took with them his grave.


11 But God shall raise his honor's high,
And give him great reward;
He who for sinner's once did die,
Now reigns as Sovereign Lord.


Source: Church Hymn Book: consisting of newly composed hymns with the addition of hymns and psalms, from other authors, carefully adapted for the use of public worship, and many other occasions (1st ed.) #LXVIII

Church Hymn Book; consisting of hymns and psalms, original and selected. adapted to public worship and many other occasions. 2nd ed. #144