All who the name of Jesus bear

Ye who the name of Jesus bear

1 Ye who the name of Jesus bear,
his sacred steps pursue;
and let that mind which was in him
be also found in you.


2 His greatness he for us abased,
for us his glory veiled;
in human likeness dwelt on earth,
his majesty concealed:


3 Nor only as a man appears,
but stoops a servant low;
submits to death, nay, bears the cross,
in all its shame and woe.


4 Hence God this generous love to all
with honours just hath crowned,
and raised the name of Jesus far
above all names renowned:


5 That at this name, with sacred awe,
each humble knee should bow,
of hosts immortal in the skies,
and nations spread below.

You who the Name of Jesus bear. [Humiliation and Exaltation of Christ.] First appeared as No. 7 in the Draft Scottish Translations and Paraphrases, 1745, as a version of Phil, ii., 6-12, in 7 stanzas of 4 lines. The author is unknown. In the revised edition, issued in 1751, stanzas iii. vii. were altered, and this form was included, slightly altered, as No. 52 in the Draft of 1781 beginning "Ye who the Name of Jesus bear." In the public worship edition of the Translations and Paraphrases, issued in that year by the Church of Scotland, and still in use, stanza v. was rewritten, and stanza ii., lines 2-4, stanza vi., line 1 altered. In the markings by the eldest daughter of W. Cameron, the original is ascribed to Isaac Watts (in whose works it is not to be found) and the alterations of 1781 to Cameron. The revised text of 1781 is included in Pratt's Collection, 1829, the English Presbyterian Psalms & Hymns, 1867, and a few other modern hymnals. Stanzas v.-vii. beginning "Hence God this generous love to men” were included, with an added doxology, in the Twickenham Chapel Collection, 1845, p. 58. In Miss Leeson's Paraphrases and Hymns for Congregational Singing, 1853, it is slightly altered as pt. i. of No. 81; her pt. ii., beginning "Hail, name of Jesus! glorious name," being partly from "All hail the power of Jesus' name." [Rev. James Mearns, M.A.] 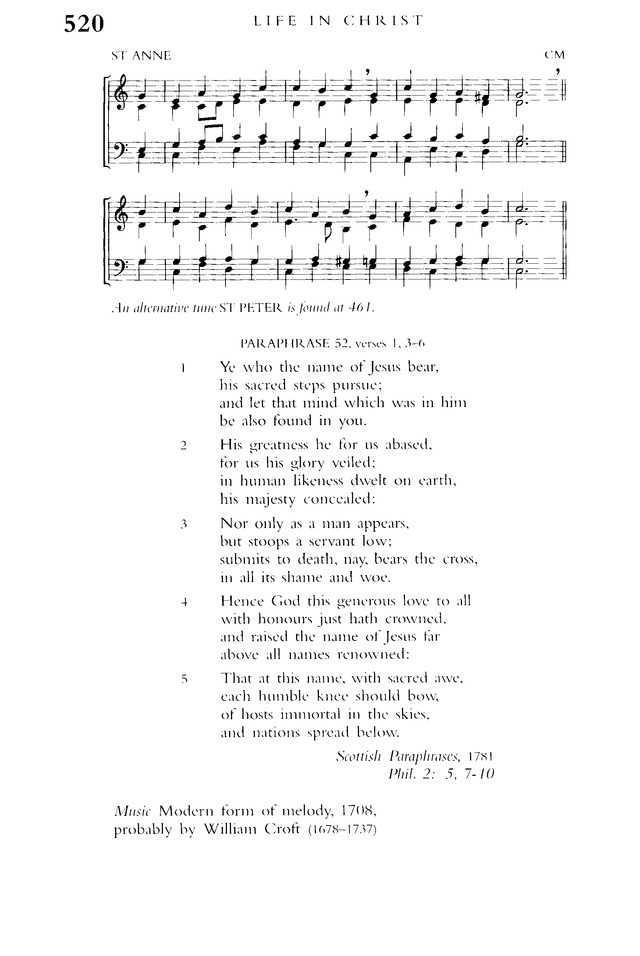