As a young child John Bacchus Dykes (b. Kingston-upon-Hull' England, 1823; d. Ticehurst, Sussex, England, 1876) took violin and piano lessons. At the age of ten he became the organist of St. John's in Hull, where his grandfather was vicar. After receiving a classics degree from St. Catherine College, Cambridge, England, he was ordained in the Church of England in 1847. In 1849 he became the precentor and choir director at Durham Cathedral, where he introduced reforms in the choir by insisting on consistent attendance, increasing rehearsals, and initiating music festivals. He served the parish of St. Oswald in Durham from 1862 until the year of his death. To the chagrin of his bishop, Dykes favored the high church practices associated with… Go to person page >
^ top

All texts published with BEATITUDO^ top

Composed by John B. Dykes (PHH 147), BEATITUDO was published in the revised edition of Hymns Ancient and Modern (1875), where it was set to Isaac Watts' "How Bright Those Glorious Spirits Shine." Originally a word coined by Cicero, BEATITUDO means "the condition of blessedness."

Like many of Dykes's tunes, BEATITUDO has a convincing melodic contour and a somewhat chromatic harmonization. Sing the outer, framing stanzas in unison and the middle ones in parts. Use just enough organ to keep this hymn moving. Maintain one pulse per measure.

Text: Come, Let Us Join with One Accord

Text: The Earth Forever Is the Lord's

Text: Lamp of Our Feet

Text: My Lord, My Love, Was Crucified

Text: My Times of Sorrow and of Joy

Text: O Christ, the Way, the Truth, the Life

Text: O Thou from Whom All Goodness Flows

Text: Searcher of Hearts, from Mine Erase

Text: Son of the Carpenter, Receive

Text: When Musing Sorrow Weeps the Past

Text: Will God for Ever Cast Us Off?

Text: Life Is A Span, A Fleeting Hour

Text: One Prayer I Have

Text: Today Be Joy In Every Heart

Text: Oh, for a Closer Walk with God
^ top 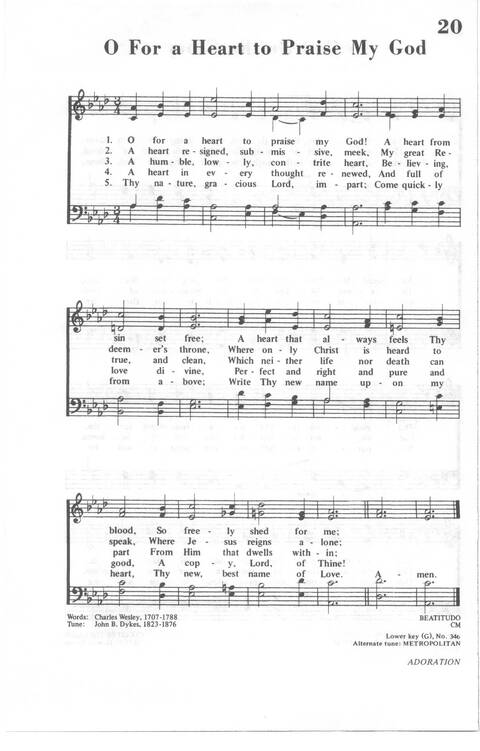 Ancient and Modern #303a

Tune Title: BEATITUDO First Line: Happy the home when God is there Composer: John B. Dykes Date: 1979
Praise! Our Songs and Hymns #148

Singing the Faith #73b

The Irish Presbyterian Hymbook #658b