The Lord Bless You and Keep You

BENEDICTION was composed in 1900 by Peter Christian Lutkin (b. Thompsonville, WI, 1858; d. Evanston, IL, 1931). This music is more an anthem than a hymn; it was called a "Farewell Anthem with Sevenfold Amen." Without the original series of "Amens," the current setting is accessible to congregations. Choirs may still love to sing the entire anthem–or if the choir wishes to sing just the blessing, the congregation can respond with a simple "Amen" cadence. Sing this music with a sense that its text is divinely ordained in the manner of an authoritative proclamation. The song's inner parts require good leadership from the choir for well-executed congregational singing. The popularity of this song can be attributed in part to its use for many years at the end of the weekly radio broadcasts of the Back to God Hour, an international ministry of the Christian Reformed Church.

Orphaned at an early age, Lutkin was raised in Chicago and had his early musical training in the choir school of the St. James Episcopal Cathedral. He studied under prominent organ teachers in Chicago, continued his education in Europe (1881-1884), and earned a doctorate in music from Syracuse University in 1900. In Chicago he served as organist and choirmaster at St. Clements Episcopal Church (1884-1891) and St. James Cathedral (1891-1896) and taught music theory at the American Conservatory (1885-1895). Lutkin was one of the founders of the American Guild of Organists. He also established the Chicago North Shore Festivals and founded the Northwestern University School of Music, of which he was the first dean (1896-1920). At several different times Lutkin was president of the Music Teacher's National Association. A composer of organ and choral music, he served on the editorial committees for both the Methodist Hymnal (1905) and the Episcopal Hymnal (1918).

Text: The Lord Bless You and Keep You

Text: The Lord Bless You and Keep You

Text: The LORD Bless You and Keep You

Text: The Lord Bless You and Keep You
^ top 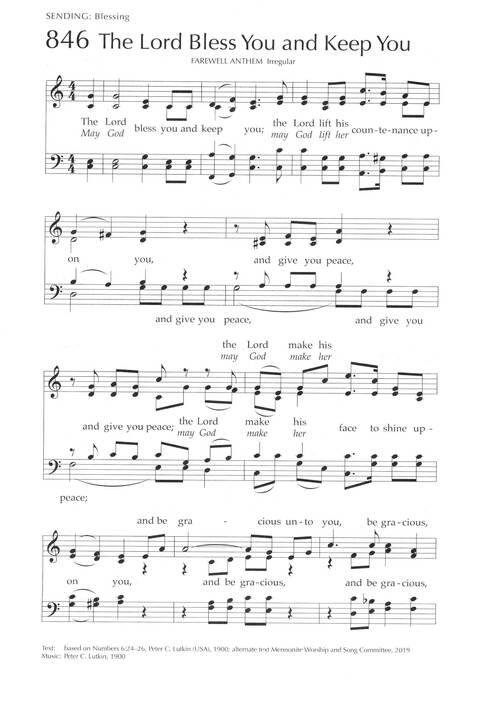 Great Songs of the Church (Revised) #632

Hymns for a Pilgrim People #581

The Hymnal for Worship and Celebration #607