I Lay My Sins on Jesus

I Saw the Cross of Jesus

'Tis Not That I Did Choose Thee

Said to be a "Greek Air," CALCUTTA was one of the popular national tunes used by Dublin's Thomas Moore (1779-1852) in his Sacred Songs (1816). Arthur S. Sullivan (PHH 46) adapted it for congregational singing and published it in his Church Hymns with Tunes (1874). [The tune was earlier adapted for congregational singing in the tune LORAINE in Lowell Mason's and George Webb's The Psaltery (1845) and in the tune MILLENIUM SONG in Thomas Hastings and William B. Bradbury's The New York Choralist (1847)] The tune is named CALCUTTA because of its association with "From Greenland's Icy Mountains," a text by Reginald Heber (PHH 249), who was the Anglican bishop of Calcutta at the time of his death.

CALCUTTA is a bar form (AAB) with a harmonization that invites part singing.

Text: I Saw the Cross of Jesus

Text: My Lord, I Did Not Choose You

Text: I Saw the Cross of Jesus

Text: My Lord, I Did Not Choose You

Text: My Lord, I Did Not Choose You
^ top 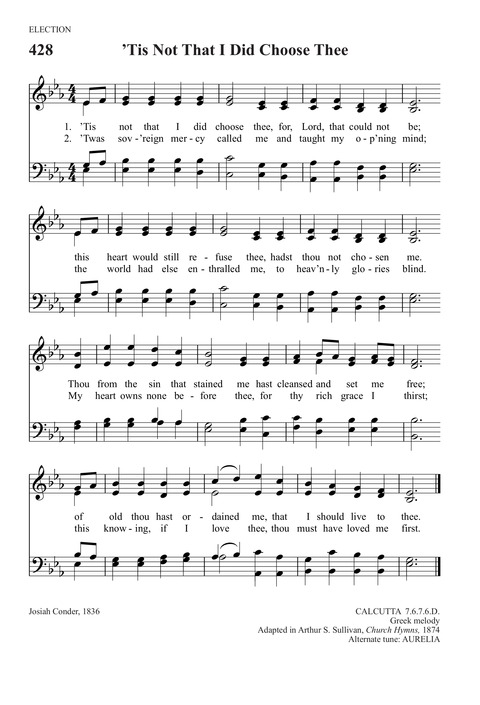 The Hymnal for Worship and Celebration #340