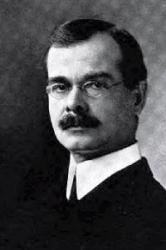 Born: August 10, 1862, St. Louis, Missouri. Died: April 7, 1934, St. Louis, Missouri. Buried: Bellefontaine Cemetery, St. Louis, Missouri. Kroeger was a charter member of the American Guild of Organists; member the National Institute of Arts of Letters; conductor of the Amphion Male Chorus in St. Louis (1883-84); organist at the Unitarian Church of the Messiah, St. Louis (1886); director of the College of Music at Forest Park University (1887); president of the Music Teachers’ National Association (1896-97); president of the Missouri State Music Teachers’ Association (1897-99); instrumental adjudicator at the annual Kansas Jubilee (1900-03); master of programs in the Bureau of Music at the St. Louis World’s Fair, 1904; adjudicato… Go to person page >
^ top

Not unto Us, O Lord of Heaven

O teach Thou us to count our days,
And set our hearts on wisdom’s ways;
Turn, Lord, to us in our distress
In pity now Thy servants bless;
Let mercy’s dawn dispel our night,
And all our day with joy be bright.

Ernest Richard Kroeger (b. St. Louis, MO, 1862; d. St. Louis, 1934) wrote GAIRNEY BRIDGE in gospel-hymn style. The tune was set to Psalm 115 also in the 1912 Psalter. The tune should be sung in harmony, ably supported by organ articulation that points clearly to three beats per bar. The liturgical dialogue built into this psalm may be expressed through antiphonal performance: stanzas 1, 2, and 5 by everyone; stanza 3 by one group; and stanza 4 by another.

Kroeger left his mercantile business in 1885 and began formal studies in music, although he had been organist of Grace Episcopal Church in St. Louis at the age of fifteen. From 1878 to 1885 he served as organist for Trinity Episcopal Church and from 1885 to 1921 for the (Unitarian) Church of the Messiah. A founder of the Kroeger School of Music, he was also director of music at Forest Park College for Women, and he led a number of choirs in St. Louis. Kroeger composed orchestral works, string quartets, and various pieces for organ and voices.

Text: Not unto Us, O Lord of Heav'n

Text: Not unto Us, O LORD of Heaven
^ top 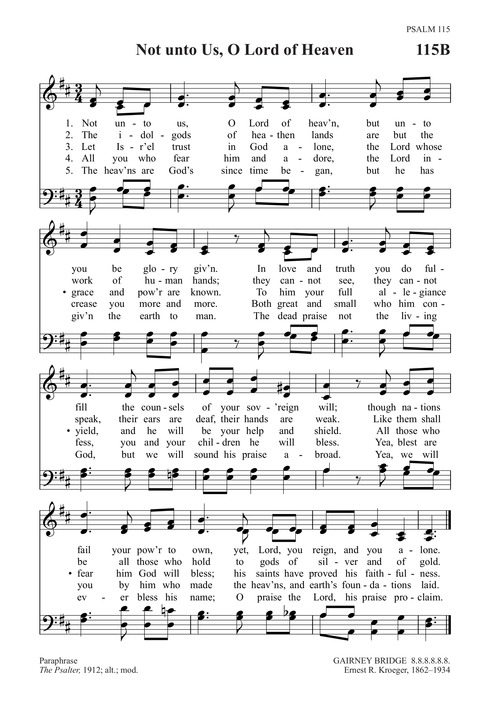