Martin Luther's versification of the Lord's Prayer was set to this tune in Valentin Schumann's hymnal, Geistliche Lieder (1539); the tune, whose composer remains unknown, had some earlier use. The tune name derives from Luther's German incipit: “Vater unser im Himmelreich….” Because VATER UNSER found later use in British and Scottish psalters as a setting for Psalm 112, it acquired the alternate title OLD 112TH in some hymnals.

Johann S. Bach (PHH 7) used this tune in his St. John Passion (1724)–from which the Psalter Hymnal gets its harmonization–and in Cantatas 90,101, and 102, among others. Bach also wrote organ preludes on the melody. Felix Mendelssohn arranged a famous organ treatment on this tune in his Sixth Organ Sonata. One of the classic chorales, VATER UNSER features phrases grouped into three long lines. Use solid organ tone and sing in harmony if resources permit.

Text: Before Thee, God, Who Knowest All

Text: Before Thy Throne, O God, We Kneel

Text: Then, Then, Th'Intestine War Is O'er

Text: Lord Jesus, in the Days of Old

Text: My Savior! I Behold Thy Life

Text: O God, Most Holy Are Thy Ways

Text: Our Father, Thou in Heaven Above

Text: Th' Abyss of Many a Former Sin

Text: Thou Hidden Love of God

The Psalms, Hymns, and Spiritual Songs of the Old and New-Testament: faithfully translated into English metre: for the use, edification, and comfort of the saints...especially in New-England (25th ed) #T8a

Text: Our Father, Lord of Heaven and Earth

Text: Our Father, Clothed with Majesty 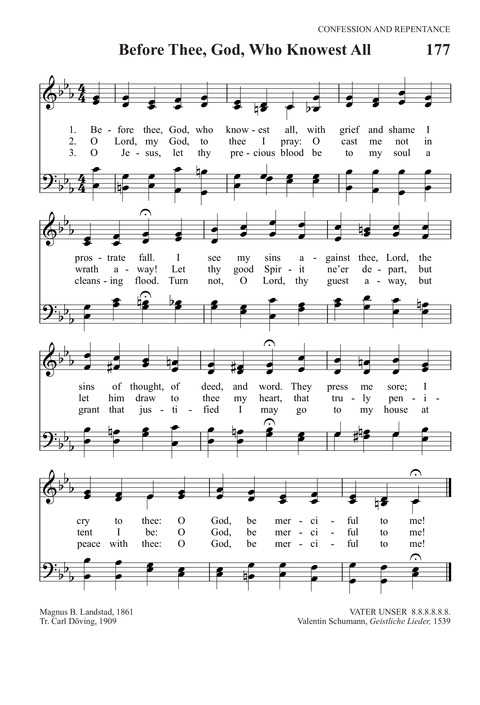 Hymns to the Living God #14

Psalms for All Seasons #115B