All texts published with GO DOWN MOSES^ top

The spiritual is in the call-and-response pattern: a leader sings the verses with some rhythmic freedom, either unaccompanied or with only light accompaniment; the entire congregation sings the phrases "Let my people go!" and the refrain, probably in harmony. That practice fits well for stanzas 1-4, but the entire group should sing all of stanza 5.

The harmonization by John W. Work, Jr. (b. Nashville, TN, 1872; d. Nashville, 1925), was originally published in The Story of the Jubilee Singers (1896). Work is well known for his pioneering studies of African American folk music and for his leadership in the performance of spirituals. He studied music at Fisk University in Nashville and classics at Harvard and then taught Latin, Greek, and history at Fisk from 1898 to 1923. Director of the Jubilee Singers at Fisk, Work also sang tenor in the Fisk Jubilee Quartet, which toured the country after 1909 and made commercial recordings. He was president of Roger Williams University in Nashville during the last two years of his life. Work and his brother Frederick Jerome Work (1879-1942) were devoted to collecting, arranging, and publishing African American slave songs and spirituals. They published two collections: New Jubilee Songs as Sung by the Fisk Jubilee Singers (1901) and Folk Songs of the American Negro (1907).

Text: When Israel Was in Egypt's Land

Text: When Israel Was in Egypt's Land 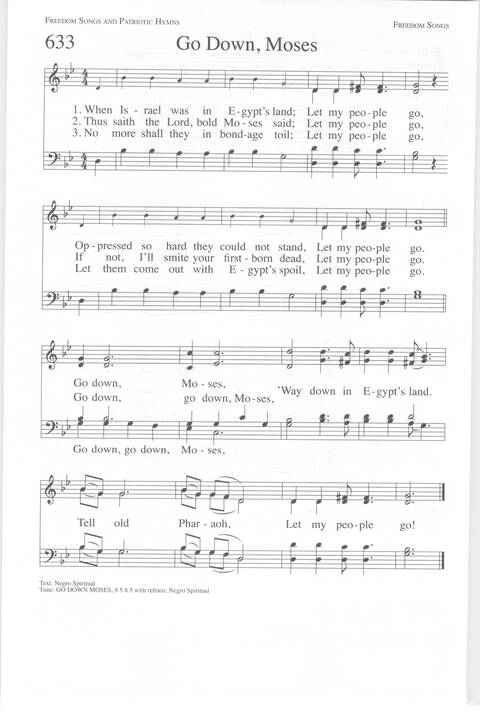 Hymns for a Pilgrim People #453