For the Bread Which You Have Broken

Faith, While Trees Are Still in Blossom

KINGDOM features a gentle melodic contour and subtle changes in rhythmic structure (that soften the trochaic meter of the text. Sing this tune in harmony and in two long lines. This communion hymn can be framed by the equally meditative "Alleluia" (see 640). Good singers may improvise additional parts (especially a higher descant) on the "Alleluia" setting. Sing it once at the beginning of the hymn and again after the fourth stanza, or perhaps have everyone sing the "Alleluia" setting and have the choir sing three hymn stanzas.

V. Earle Copes (b. Norfolk, VA, 1921) composed KINGDOM in 1959 for the hymn text "For the Bread Which Thou Hast Broken," written by Louis F. Benson; the tune name derives from the word "kingdom" in the final line of that text. KINGDOM was first; used publicly at the 1960 National Convocation of Methodist Youth, and it was later published as an anthem. The first hymnal to publish it was The Methodist Hymnal (1964)

An ordained Methodist minister, Copes has served mainly in the musical ministry of the church. He was educated at Davidson College and Union Theological Seminary, obtaining degrees in both church music and theology. From 1946 to 1949 he was J minister of music at the Highland Park Methodist Church, Dallas, Texas, and at Christ United Methodist Church, Dayton, Ohio. In subsequent years he taught organ and church music at Hendrix College, Conway, Arizona, and at Cornell College, Mt. Vernon, Iowa. Copes also edited the Methodist periodical Music Ministry (1958-1967), taught at Birmingham Southern College in Alabama (1967-1973), and served as minister of music at Christ United Methodist Church, Kettering, Ohio (1973-1986). Now retired, Copes has published numerous works for organ and choir. 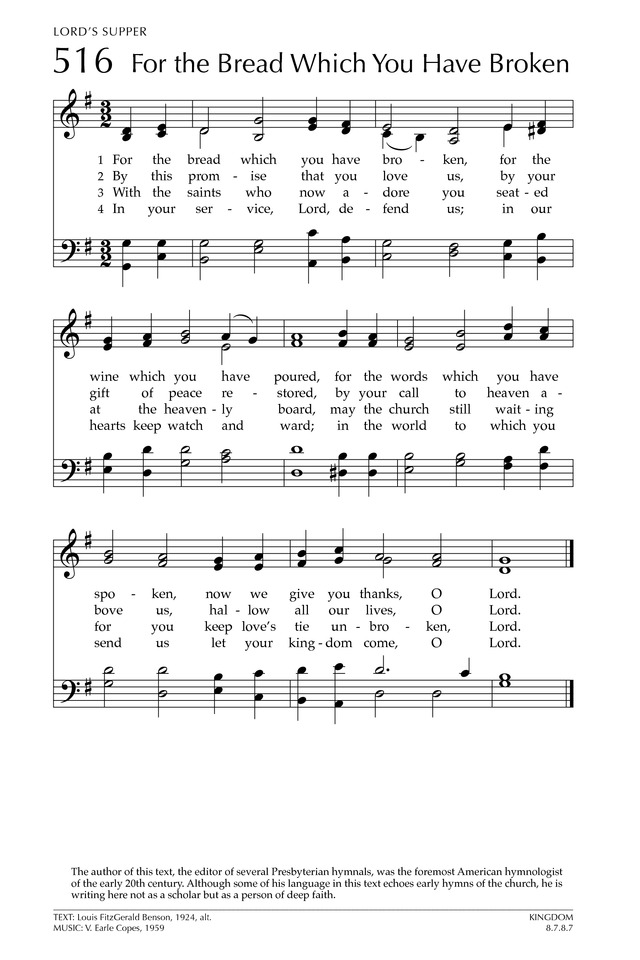