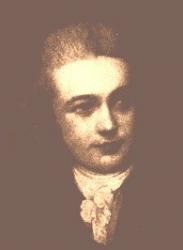 During the early 1780s François H. Barthélemon (b. Bordeaux, France, 1741; d. Southwark, Surrey, England, 1808) wrote MORNING HYMN at the request of Jacob Duche, chaplain at the Female Orphan Asylum in London, England. Duche had requested that Barthélemon compose a tune for the well-known morning hymn by Thomas Ken (PHH 441), "Awake, My Soul." The tune was published in A Supplement to the Hymns and Psalms Used at the Asylum or House of Refuge for Female Orphans (undated, but printed between 1785-1789).

Born of a French father and Irish mother, Barthélemon had a brief military career in the Irish Brigade after which he studied music on the continent. He moved to London in 1765. There he began a musical career as a composer, especially for opera and ballet, and as an outstanding violinist. A close friend of Joseph Haydn,
Barthélemon composed theater music, some concertos, choral and chamber works, and a small amount of church music (some of it for use in the chapel of the Asylum for Female Orphans). Later in life he became interested in the philosopher Emanuel Swedenborg and joined the Swedenborgian Church.

Erik Routley (PHH 31) refers to MORNING HYMN as a children's tune, but its mainly stepwise motion and marching rhythms make it accessible to people of all age groups. Sing in parts at a moderate pace. Consider using the better-known WINCHESTER NEW (593) as an alternate tune.

Text: Head of Thy Church, Whose Spirit Fills

Text: Though Now the Nations Sit Beneath

Text: When God Is Seen with Men to Dwell

Text: The Rich And Poor Together Meet

The Hymnal, Revised and Enlarged, as adopted by the General Convention of the Protestant Episcopal Church in the United States of America in the year of our Lord 1892 #2

Text: Awake, my soul, and with the sun Ancient and Modern #327a