All texts published with NYLAND^ top

NYLAND, named for a province in Finland, is a folk melody from Kuortane, South Ostrobothnia, Finland. In fact, the tune is also known as KUORTANE. NYLAND was first published with a hymn text in an appendix to the 1909 edition of the Finnish Suomen Evankelis Luterilaisen Kirken Koraalikirja. It gained popularity in the English-speaking world after David Evans's use of it in the British Church Hymnary of 1927 as a setting for Anna 1. Waring's text "In Heavenly Love Abiding." Evans (b. Resolven, Glamorganshire, Wales, 1874; d. Rosllannerchrugog, Denbighshire, Wales, 1948) edited that hymnal, which was the source of a number of his harmonizations, including this one.

David Evans was an important leader in Welsh church music. Educated at Arnold College, Swansea, and at University College, Cardiff, he received a doctorate in music from Oxford University. His longest professional post was as professor of music at University College in Cardiff (1903-1939), where he organized a large music department. He was also a well-known and respected judge at Welsh hymn-singing festivals and a composer of many orchestral and choral works, anthems, service music, and hymn tunes.

NYLAND is a modified rounded bar-form tune (AA'BA') with a wide-ranging melodic contour and a fine harmonization for part singing. It needs good singers for the harmony and requires organ phrasing that produces four long lines. 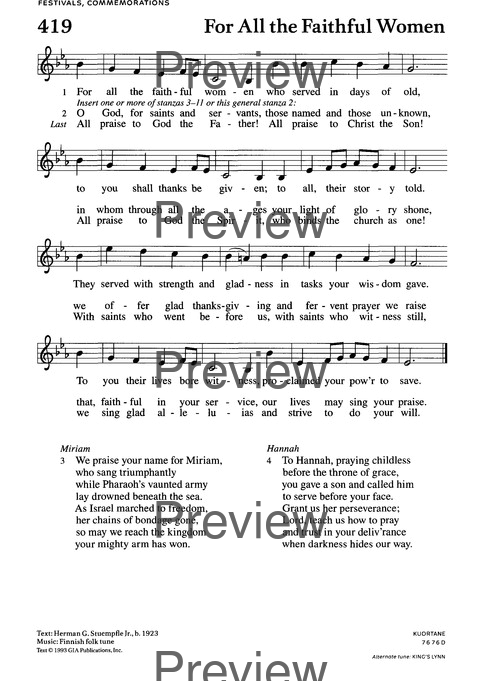 Hymns for a Pilgrim People #373

Lift Every Voice and Sing II #50

Tune Title: NYLAND First Line: My song shall be of Jesus, His mercy crowns my days Date: 1985
Seventh-day Adventist Hymnal #244