I Need Your Help, O LORD My God

His Love and Care

I bow my forehead to the dust,
I veil mine eyes for shame,
And urge, in trembling self-distrust,
A prayer without a claim.

Orphaned at age three when his parents died of cholera, Vander Werp was raised by relatives. He trained to be a schoolteacher, did further studies in modern languages, and became a tutor to a wealthy family in Rotterdam. A member of the Dutch Seceder Church, he continued his studies at the theological seminary in Kampen and then took a pastorate in Beverwijk (1879-1881). After immigrating to the United States, Vander Werp served a Christian Reformed congregation in Noordeloos, Michigan (1882). Later he was pastor at Christian Reformed churches in Chicago, Cincinnati, South Dakota, and Michigan until his retirement in 1913. Vander Werp left a considerable body of writings in both Dutch and English, including poetry, editorials, many articles in the Christian Reformed periodicals De Wachter and The Banner, two catechism books, and children's stories. His privately published psalm book (see above) contained a number of his psalm tunes with texts from the 1909 draft of the United Presbyterian Psalter. He had hoped that the Christian Reformed Church would accept his book as its official English-language psalter because of its use of Genevan tunes, but the synod of 1914 decided instead to accept the United Presbyterian 1912 Psalter (with over four hundred tunes but virtually no Genevan tunes).

For regular congregational use of this isorhythmic tune (all equal rhythms) sing in harmony. Organists could highlight Jesus' quotations by a change in registration. For a more dramatic performance, try having the choir begin each stanza and then hum the parts while a soloist sings the words of Christ; the congregation could join in singing the second half of each stanza.

Text: I Bow My Forehead to the Dust

Text: I Heard the Voice of Jesus Say
^ top 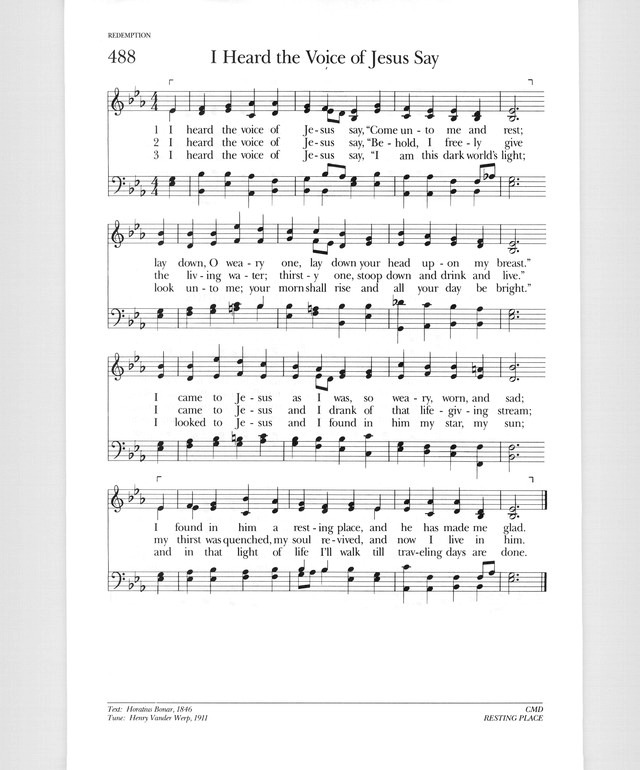 Psalms for All Seasons #55A