I heard the voice of Jesus say, "Come unto Me and rest

1 I heard the voice of Jesus say,
“Come unto me and rest.
Lay down, O weary one,
lay down your head upon my breast.”
I came to Jesus as I was,
so weary, worn, and sad.
I found in him a resting place,
and he has made me glad.


2 I heard the voice of Jesus say,
“Behold, I freely give
the living water, thirsty one;
stoop down and drink and live.”
I came to Jesus, and I drank
of that life-giving stream.
My thirst was quenched, my soul revived,
and now I live in him.


3 I heard the voice of Jesus say,
“I am the dawning light.
Look unto me, your morn shall rise,
and all your day be bright.”
I looked to Jesus, and I found
in him my star, my sun,
and in that light of life I’ll walk
till trav’ling days are done.

Despite his intimidating name and physical appearance, Horatius Bonar (1808-89) was a great lover of children and was concerned about how little the children understood of the metrical Psalms that were sung in the Scottish church of his day. "I Heard the Voice of Jesus Say" was one of the over 600 hymns he wrote to address the needs of the churches he served. Interestingly, John B. Dykes (composer of "Holy, Holy, Holy" and "Jesus, the Very Thought of Thee") uses the somber key of G minor to present Jesus' invitation to our weary, thirsty and dark souls in the first half of each verse; in the second half of each verse when the invitation has been accepted and the soul satisfied, Dykes uses the happier key of G major. Take some time to read Jesus' invitations to you as recorded in the Gospels and reflect on your response to Him: Matthew 11:28; John 4:10, 13-14; John 8:12. --Greg Scheer, 1996
========================

I heard the voice of Jesus say. H. Bonar. [Christ's Invitation.] Written at Kelso, and published in his Hymns Original and Selected, 1846, and in the 1st series of his Hymns of Faith & Hope, 1857, in 3 stanzas of 8 lines, and headed, “The Voice from Galilee." It has come into extensive use, and is one of the most popular of the author's hymns. It is often used in Home Mission Services, and is suited thereto. It has been rendered into Latin by Dr. Macgill in his Songs of the Christian Creed and Life, 1876, as “Loquentem exaudivi." 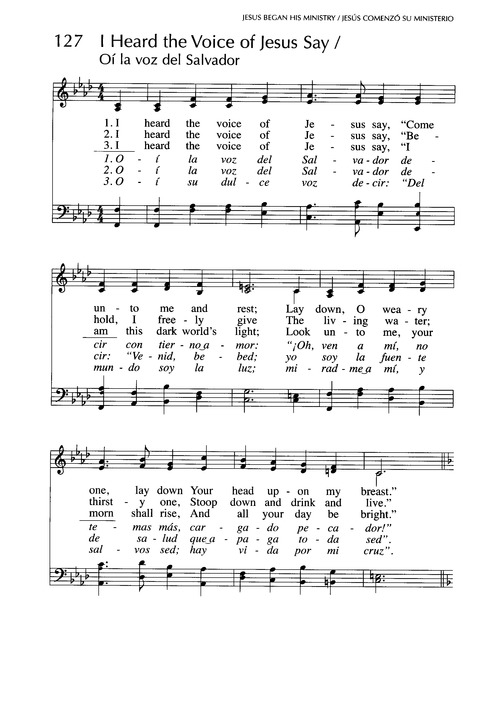 Hymns of the Christian Life #313

Display Title: Shine on Me First Line: I heard the voice of Jesus say Tune Title: SHINE ON ME Meter: CM with refrain Scripture: Psalm 31:16; Matthew 11:28 Date: 2018 Subject: The Gospel in the Christian Life | Healing and Comfort; Burdens | ; Comfort | ; Grief | ; Spirituals | Source: Negro Spiritual
One Lord, One Faith, One Baptism #548

Sacred Selections for the Church #631

The Book of Hymns (A fresh anthology of favourite hymns) #44

The Hymnal for Worship and Celebration #414

The Irish Presbyterian Hymbook #345a

The Irish Presbyterian Hymbook #345b

The Song Book of the Salvation Army #332