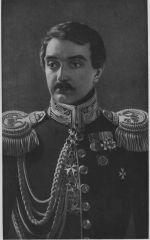 Alexis Federovich L’vov Estonia 1798-1870. Born at Reval, Estonia, son of the St. Petersburg imperial court chapel director, he learned violin as a child and gave regular concerts in his home at age 9. Studying under a number of teachers until age 19, he then studied independently and developed his own personal style of playing. He entered the Russian army in 1818, became a civil engineer there eventually a General in 1828, when he was appointed Aide-de-camp to Tsar Nicholas I. He married Praskovya Aggeyevna, and they had a son and two daughters. He eventually took over his father’s post after he died in 1837 and stayed at that position for 24 years. He formed a string quartet in St. Petersburg and held weekly concerts at his pri… Go to person page >
^ top

God, the all merciful, Earth has [hath] forsaken

Alexey Feodorovitch Lvov (b. Reval [now Tallin], Estonia, 1799; d. Romanovo, near Kovno [now Kaunas], Lithuania, 1870) composed RUSSIA in 1833 one night "on the spur of the moment," according to his memoirs, after Czar Nicholas I asked him to compose a truly Russian national anthem (rather than continuing to sing a Russian text to the English melody for "God Save Our Gracious King"!). Lvov's tune was accepted and has been featured as the Russian anthem in various compositions (including Tchaikovsky's 1812 Overture). Also used as a hymn tune ever since its 1842 publication in John Pyke Hullah's Part Music, RUSSIA is today often associated with the hymn text "God the Omnipotent!" Given its origin as a national anthem, the tune does have a majestic character and suggests brass instruments for accompaniment. Part singing is glorious! To highlight the change of voice from stanza 1 to stanza 2, have a soloist or choir sing stanza 1, and ask everyone to join in on stanzas 2 and 3–or perhaps have half the congregation sing 1; the other half, 2; and all together sing 3.

Lvov served in the Russian army from 1818 to 1837, advancing to personal adjutant to Czar Nicholas I as a major-general. In 1837 he succeeded his father as director of the imperial court chapel choir in St. Petersburg, a post he retained until 1861. A fine violinist, Lvov played Mendelssohn's violin concerto in Leipzig with the composer conducting in 1840. He toured with his own string quartet until deafness forced his retirement in 1867. Lvov composed much church music for the imperial choir as well as a violin concerto and several operas. He also compiled a collection of church music for the Orthodox church year, but is best known as the composer of the tune for the Russian national anthem.

Text: I Am the LORD Your God 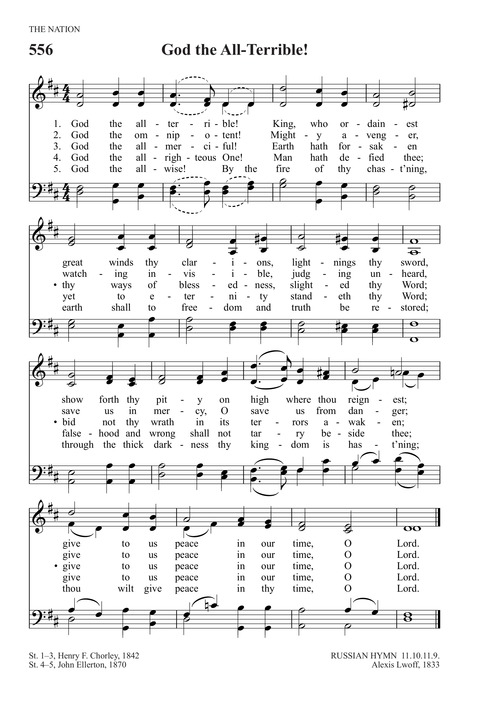 Hymns for a Pilgrim People #42

The Hymnal for Worship and Celebration #33