Johann Sebastian Bach was born at Eisenach into a musical family and in a town steeped in Reformation history, he received early musical training from his father and older brother, and elementary education in the classical school Luther had earlier attended. Throughout his life he made extraordinary efforts to learn from other musicians. At 15 he walked to Lüneburg to work as a chorister and study at the convent school of St. Michael. From there he walked 30 miles to Hamburg to hear Johann Reinken, and 60 miles to Celle to become familiar with French composition and performance traditions. Once he obtained a month's leave from his job to hear Buxtehude, but stayed nearly four months. He arranged compositions from Vivaldi and other Itali… Go to person page >
^ top

Wilt Thou Forgive That Sin, Where I Begun

O LORD My God, from You Alone Comes Aid

O LORD my God, from you alone comes aid.
Save me from those who make me sore afraid,
who, a lion, stalk and drag me off,
while no one comes to save me or to help.
What have I done, O LORD, I cry,
that I should die?

All texts published with SO GIEBST DU^ top

SO GEIBST DU (also called DRESDEN) was first published in the Dresden collection Geist und Lehr-reiches Kirchen und Haus Buch (1694). The complete translated title of this collection reads: "Spiritual and instructive church and house book, including familiar old Lutheran hymns (so lovely), new pure hymns-especially the Syrachis Catechism, Sunday hymns, feastday hymns, until now the formal edition of the Dresden court hymnal, for cantors and organists, with melody and figured bass. To make available for the first time for the Saxon nobility, relevant contributions of the past and with gladness to issue new hymns." The tune name SO GEIBST DU is the incipit of the 24-stanza German hymn text in that collection. Consisting of five long phrases, SO GIEBST DU is one of the more difficult melodies in the Psalter Hymnal, but it is surely worth the effort it may take to learn. A stately tempo works best. If the initial stanzas are performed in the manner of a prayer of petition, the vow of praise in stanza 5 merits full voice and full organ. Johann S. Bach composed the harmonization for the Musicallisches Gesangbuch of 1736, which he edited. He did not use this tune in any other extant works.

Johann Sebastian Bach (b. Eisenach, Germany, 1685; d. Leipzig, Germany, 1750) came from a family of musicians. He learned to play violin, organ, and harpsichord from his father and his older brother, Johann Christoph. Bach's early career developed in Arnstadt and Muhlhausen, particularly at the court of Duke Wilhelm Ernst in Weimar. During this period he composed cantatas and most of his large organ works. In 1717 Bach became director of music for Prince Leopold in Anhalt-Cathen, for whom he composed much of his instrumental music-orchestral suites and concertos as well as The Well-Tempered Clavier. In 1723 he was appointed cantor of the Thomas Schule at Leipzig and director at St. Thomas and St. Nicholas churches and at the University of Leipzig. During that time he wrote his large choral works, 165 cantatas, and more compositions for organ and harpsichord. Although Bach's contribution to church music was immense and his stature as the finest composer of the Baroque era unparalleled, he composed no hymn tunes for congregational use. He did, however, harmonize many German chorales, which he used extensively in his cantatas, oratorios, and organ works. These harmonizations were published posthumously by his son Carl Phillip Emmanuel as 371 Vierstimmige Choralgesiinge. 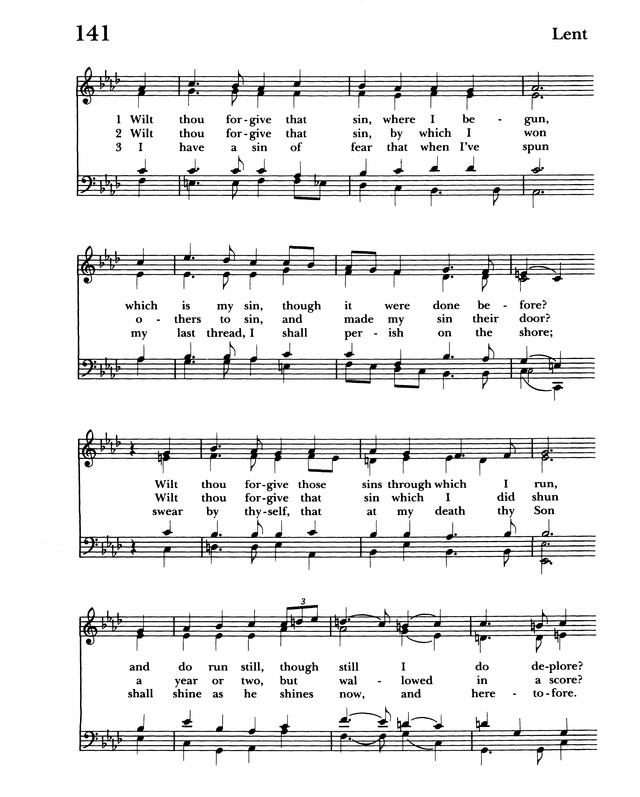