Samuel Howard (b. London, England, 1710; d. London, 1782) composed ST. BRIDE as a setting for Psalm 130 in William Riley's London psalter, Parochial Harmony (1762). The melody originally began with "gathering" notes at the beginning of each phrase. The tune's title is a contraction of St. Bridget, the London church on Fleet Street where Howard was organist (the church was destroyed in an air raid in 1940).

Howard was a chorister in the Chapel Royal and later sang tenor in a chorus for Georg Friederich Handel. But his main career was as an organist: he held concurrent organist positions at St. Bride, Fleet Street (1736-1782), and St. Clement Dane, The Strand (1769-1782). A composer of many songs, cantatas, and theater music, Howard assisted William Boyce (PHH 553) in the compiling of Cathedral Music (1760-1773). His church music includes a number of anthems and hymn tunes.

Erik Routley (PHH 31) described ST. BRIDE as "one of the best short-meter tunes available" because of the "girder-like effect of the long downward scale contrasting with the arch-like shape of the other three phrases" (The Music of Christian Hymns, p. 71). The tune is constructed with a sensitive balance of melodic steps and leaps. Sing in harmony at a deliberate pace that permits consideration of the literary device in the text.

Text: And Wilt Thou Pardon, Lord?

Text: Come, Lord, and Tarry Not

Text: Far from My Heavenly Home

Text: Have Mercy, Lord on Me

Text: Lord of the Harvest, Hear

Text: O'erwhelmed in Depths of Woe

Text: A Dread And Solemn Hour 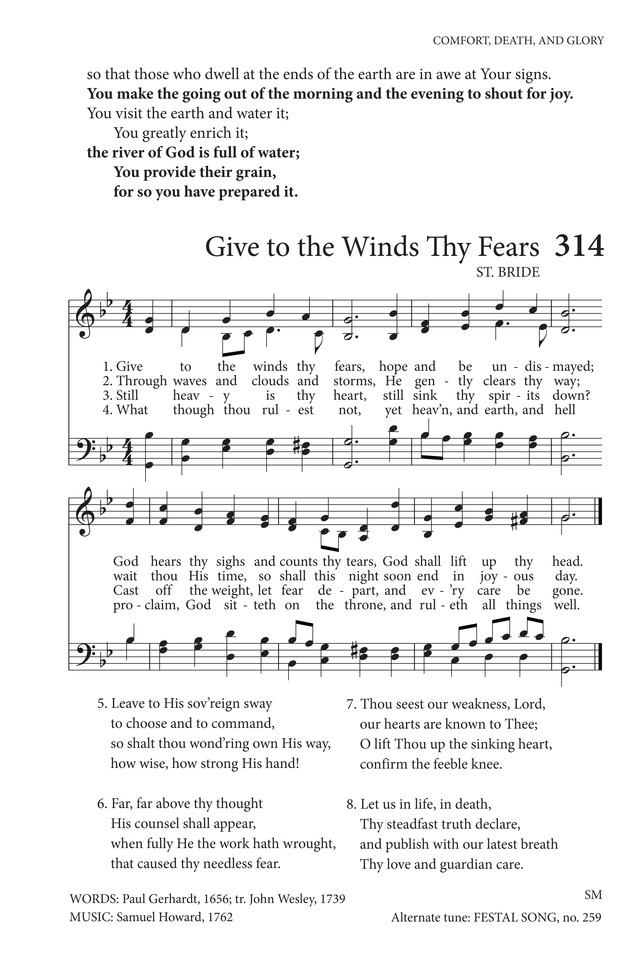 Hymnal for the Hours #9