James Walch was a musician and composer, born near Bolton in 1837. He spent his early life in the town and was organist in several churches there, including the parish church of St George’s. From 1870-1877, he was conductor for the Bolton Philharmonic Society. He also composed at least four published hymn tunes, the best known of which is called “Tidings”. Written in 1875, it’s usually used as the tune to a hymn called “O Zion Haste”. James Walch was a musical instrument dealer by trade, and moved to Barrow-in-Furness in 1877. He later moved to Llandudno Junction in North Wales, where he died in August 1901 and was buried locally. His wife later donated money to pay for the organs in two local churches, St Paul's Llandu… Go to person page >
^ top

All texts published with TIDINGS^ top

James Walch (b. Edgerton, Lancashire, England, 1837; d. Llandudno, Caernarvon, Wales, 1901) composed TIDINGS in 1875 for Frederick W. Faber's hymn text "Hark, Hark, My Soul! Angelic Songs Are Swelling"; the tune was first published in The Hymnal Companion to the Book of Common Prayer (1877). TIDINGS is often associated with Mary A. Thomson's "O Zion, Haste, Thy Mission High Fulfilling"; in fact, the tune name derives from the word "tidings" in Thomson's refrain (see 525). TIDINGS is a fairly dramatic tune, a good match for Psalm 103. Sing in parts if you like, and add extra musical forces J for the refrain. Stanza 3 sings well without accompaniment.

Walch received a musical education from his father and from the famous organist and organ builder Henry Smart (PHH 233). He served as organist at Duke's Alley Congregational Church (1851-1857), Bridge Street Wesleyan Chapel (1858-1863), and St. George's Parish Church (1863-1877)-all in Bolton. He conducted for the Bolton Philharmonic Society from 1870 to 1877 and near the end of his life was a music dealer in Barrow-in-Furness. Walch composed a number of hymn tunes and other church music.

Text: O Come, My Soul, Bless Thou the Lord Thy Maker 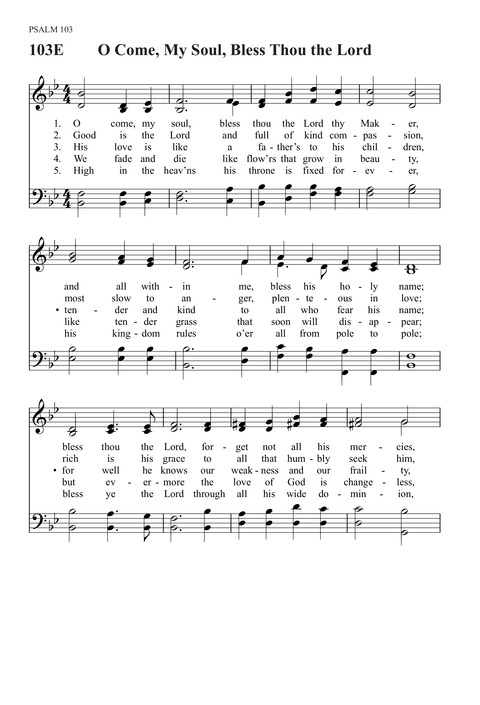 Psalms for All Seasons #103B

Psalms for All Seasons #104C

The Hymnal for Worship and Celebration #298