On Jordan's bank the Baptist's cry
announces that the Lord is nigh.
Awake and harken, for he brings
glad tidings of the King of kings!

The original version of WINCHESTER NEW appeared in Musikalisches Handbuch der geistlichen Melodien, published in Hamburg, Germany, in 1690 by Georg Wittwe. It was set to the text “Wer nur den lieben Gott” (see 446). An expanded version of the tune was a setting for "Dir, dir Jehova" (see 203) in Johann Freylinghausen's Geistreiches Gesangbuch (1704). The melody was also used by John and Charles Wesley (PHH 267) for their texts and was reworked by William J. Havergal as a long-meter tune in his Old Church Psalmody (1864). Havergal's version closely resembled its original 1690 form. Named for the ancient English city in Hampshire noted for its cathedral, the tune gained much popularity because of its extended use. It is called WINCHESTER NEW (also called CRASSELIUS) to distinguish it from WINCHESTER OLD (see 215 and 628).

Sing this dignified psalm tune in unison on the outer stanzas and in parts on the middle ones. Use solid organ tone and phrase in two long lines.

Text: Creation's Lord, We Give Thee Thanks

Text: Eternal One, Thou Living God

Text: Holy as Thou, O Lord, Is None

Text: No More, Dear Savior, Will I Boast

Text: This Day at Thy Creating Word

Text: Uprising From The Darksome Tomb

Text: My Song Forever Shall Record

Text: Throughout These Lenten Days and Nights
^ top 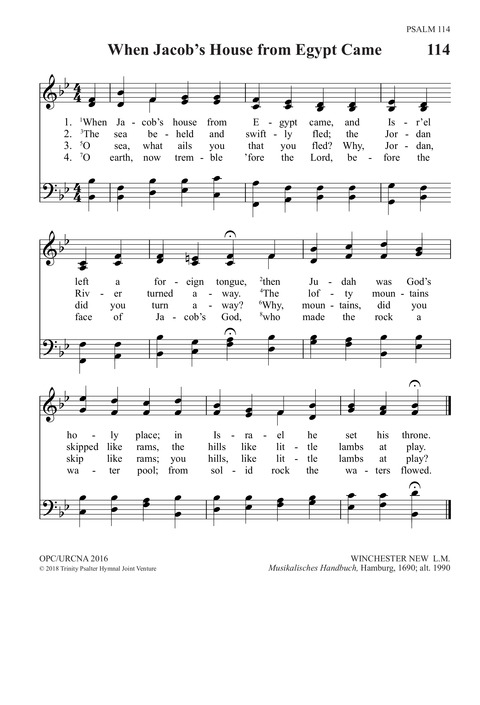 A New Hymnal for Colleges and Schools #220

Ancient and Modern #161a

Tune Title: WINCHESTER NEW First Line: Lord, we believe to us and ours Composer: Hamburg Date: 1983
Hymns and Psalms #307

Psalms for All Seasons #89E

The Book of Common Praise of the Reformed Episcopal Church #17

Include 127 pre-1979 instances
All instances^ top
Suggestions or corrections? Contact us