1 On Jordan's bank the Baptist's cry
announces that the Lord is nigh.
Awake and harken, for he brings
glad tidings of the King of kings!


2 Then cleansed be every life from sin:
make straight the way for God within,
and let us all our hearts prepare
for Christ to come and enter there.


3 We hail you as our Savior, Lord,
our refuge and our great reward.
Without your grace we waste away
like flowers that wither and decay.


4 Stretch forth your hand, our health restore,
and make us rise to fall no more.
O let your face upon us shine
and fill the world with love divine.


5 All praise to you, eternal Son,
whose advent has our freedom won,
whom with the Father we adore,
and Holy Spirit, evermore.

John the Baptist's announcement "Prepare the way for the Lord" (Matt. 3:3, a quote from Isa. 40:3) is the primary basis for this Advent hymn. Stanzas 1 and 2 apply that message to people today; stanza 3 is a confession by God's people of their need for salvation; stanza 4 is a prayer for healing and love; stanza 5 is a doxology. This much-loved Advent text is laced with various scriptural phrases.

Charles Coffin (b. Buzancy, Ardennes, France, 1676; d. Paris, France, 1749) wrote this text in Latin (“Jordanis oras praevia”) for the Paris Breviary (1736), a famous Roman Catholic liturgical collection of psalms, hymns, and prayers. Coffin was partially responsible for the compilation of that hymnbook. Latin remained the language of scholarship and of the Roman Catholic liturgy in the eighteenth century. Working in that tradition, Coffin was an accomplished Latin scholar and writer of Latin poems and hymns. Educated at Deplessis College of the University of Paris, he served on the faculty and was university rector at the College of Doirmans-Beauvais, the University of Paris. He collected a hundred of his hymns and published them in Hymni Sacri (1736); a number of these have found their way into English language hymnals, including this Advent hymn.

The English translation is a composite work based on a translation by John Chandler (PHH 485), who published it in Hymns of the Primitive Church (1837). (Chandler thought it was a medieval text!) Since 1837, various hymnal editors have revised the text in attempts to bring the translation closer to Coffin's original.

Liturgical Use:
During Advent, especially in worship services on John the Baptist; sermons on repentance and renewal. The final stanza makes a fitting doxology for the four Sundays in Advent as well as for Christmas.

All tunes published with 'On Jordan's bank the Baptist's cry'^ top

In The Message, Eugene Peterson paraphrases Matthew 3:3 in these words: “Thunder in the desert! Prepare for God’s arrival! Make the road smooth and straight!” In the New International Version, this first line is written, “A voice of one calling in the wilderness.” Why does Peterson use “thunder” instead of “voice”? It’s possible he’s trying to evoke the imagination, or startle us into being aware and ready for Christ in a way that a normal voice couldn’t do. Peterson uses this tactic again in Revelation 2-3, where, at the end of each letter to the churches, it is written, “Are your ears awake? Listen. Listen to the Wind Words, the Spirit blowing through the churches.” In preparation of Christ’s birth, and in preparation of his second coming, we are instructed to listen. Before we can prepare our hearts, we must know why and how we would do so. We must listen to the cry of the Holy Spirit with all of the rapt attention with which we listen to great peals of thunder and rustling winds. We must sharpen our senses so they are alive to the voice of God in our lives. As the hymnist writes, we must “awake and harken!”

Charles Coffin wrote this text in Latin for the Paris Breviary, published in 1736. In 1837 it was translated into English by John Chandler for his Hymns of the Primitive Church (Chandler mistakenly thought it was a medieval text). The text has since undergone many revisions, and today it is hard to find two hymnals in which the text is the same. Almost all hymnals include the same five verses (most modern hymnals leave out the original second stanza), but the wording changes quite significantly between texts.

The overall theme of the verses, however, is evident regardless of the version used. Stanzas one and two are a message to us, instructing us to prepare the way of the Lord today. In stanza three, we confess our need for salvation, in stanza four we pray for healing and love, and stanza five acts as a doxology.

Almost as broad as the spectrum of words used in the text is the spectrum of tunes that accompany this hymn. Originally, the text was paired with an anonymous tune that has undergone many alterations and adaptations into what is today called WINCHESTER NEW. This is the most common tune, but another option is PUER NOBIS, particularly beautiful when done in a Celtic style. Or, try the tune DEO GRACIAS, a tune more commonly associated with “O Love, How Deep, How Broad, How High.” Try singing this tune a cappella using just a hand drum in a medieval style. With an 8.8.8.8 meter, there are a number of tunes to pick from – these are just a few of the favorites.

Since this hymn explicitly calls us to make way for Christ, it is most fitting for the season of Advent. It references John the Baptist, a key figure in the narrative of Christ’s birth, and also address us today, to prepare the way or Christ’s second coming. One option suggested by the editors of the Psalter Hymnal Handbook is to sing the last verse as the doxology each of the four Sundays in Advent. 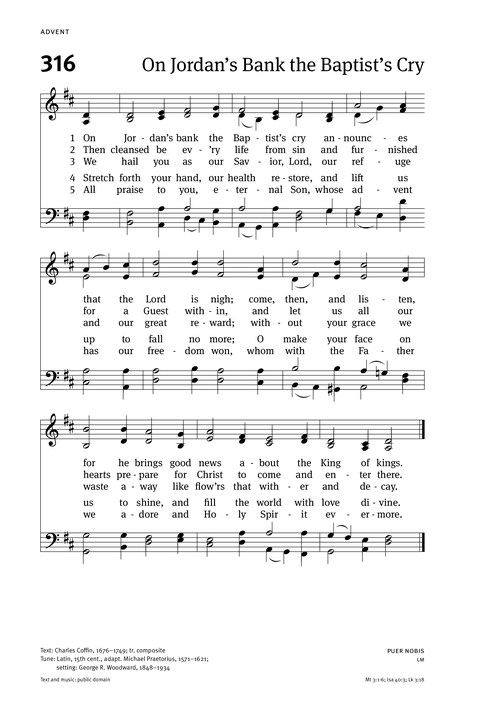 A New Hymnal for Colleges and Schools #220

Hymns to the Living God #95

The Book of Common Praise of the Reformed Episcopal Church #17