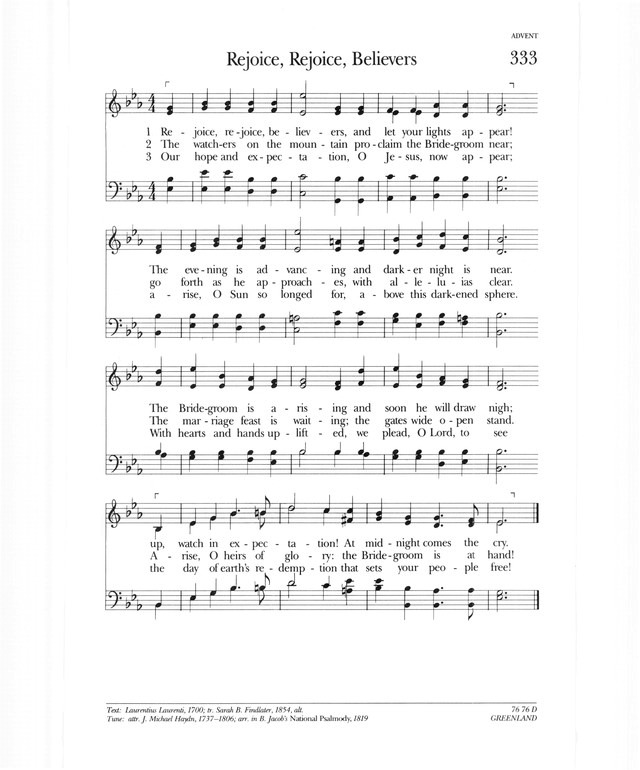 1 Rejoice, rejoice, believers,
and let your lights appear!
The evening is advancing
and darker night is near.
The Bridegroom is arising
and soon he will draw nigh;
up, watch in expectation!
At midnight comes the cry.


2 The watchers on the mountain
proclaim the Bridegroom near;
go forth as he approaches,
with alleluias clear.
The marriage feast is waiting;
the gates wide open stand.
Arise, O heirs of glory:
the Bridegroom is at hand!


3 Our hope and expectation,
O Jesus, now appear;
arise, O Sun so longed for,
above this darkened sphere.
With hearts and hands uplifted,
we plead, O Lord, to see
the day of earth's redemption
that sets your people free!

Considered to be one of the finest hymn writers of the Pietistic period, Laurentius Laurenti wrote this text based on the parable of the wise and foolish maidens (Matt. 25: 1-13; see also 613). Stanzas 1 and 2 focus on the expected coming of the bridegroom; stanza 3 is a prayer for Christ's return to complete the work of redemption and to set his people free.

Born Lorenz Lorenzen (b. Husum, Schleswig, Germany, 1660; d. Bremen, Germany, 1722) in Schleswig (which at various times has been ruled by Denmark), Laurenti studied at the University of Rostock and in Kiel. In 1684 he moved to Bremen, where he was appointed music director and cantor in the Lutheran Cathedral Church. A well known writer of German hymns in the Pietist tradition, Laurenti based most of his hymn texts on the gospel lessons for the church year. They were published in Evangelia Melodica (1700).

Sarah Borthwick Findlater (b. Edinburgh, Scotland, 1823; d. Torquay, England, 907) translated the text into English and published it in Hymns from the Land of Luther (1854), a collection of 122 hymns translated by her (53 hymns) and her sister Jane Orthwick. Findlater was a fine linguist; as a translator of German chorales, she is considered second only to Catherine Winkworth (PHH 194). Findlater's husband, Eric John, was a pastor in the Free Church of Scotland in Lochearnhead, Perthshire. The Findlater parsonage was known as being literate and hospitable.

Liturgical Use:
During Advent, focusing on Christ's second coming.