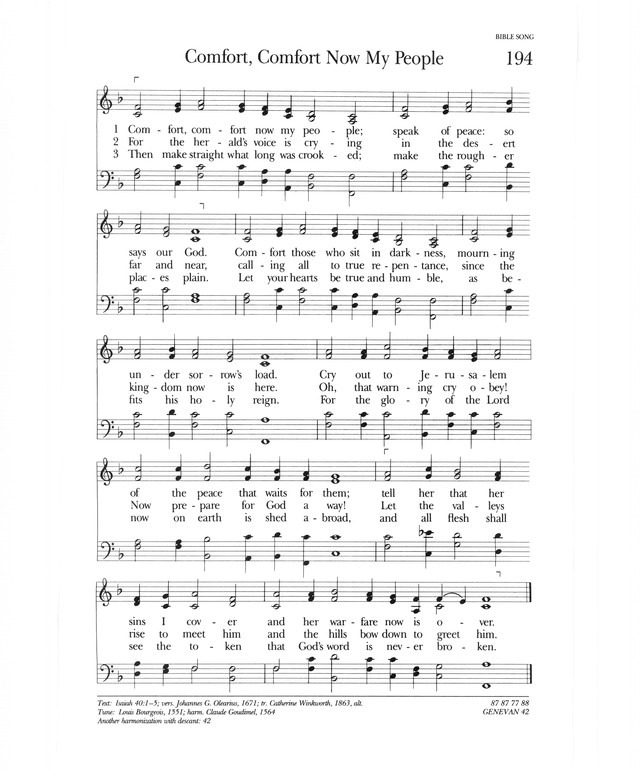 1 Comfort, comfort now my people;
speak of peace: so says our God.
Comfort those who sit in darkness,
mourning under sorrow's load.
Cry out to Jerusalem
of the peace that waits for them;
tell her that her sins I cover
and her warfare now is over.


2 For the herald's voice is crying
in the desert far and near,
calling all to true repentance,
since the kingdom now is here.
Oh, that warning cry obey!
Now prepare for God a way!
Let the valleys rise to meet him
and the hills bow down to greet him.


3 Then make straight what long was crooked;
make the rougher places plain.
let your hearts be true and humble,
as befits his holy reign.
For the glory of the LORD
now on earth is shed abroad,
and all flesh shall see the token
that God's word is never broken.

This song is a versification of Isaiah 40:1-5, the passage that opens the final large group of prophecies in Isaiah 40-66. Many of these prophecies express consolation and hope that Judah's exile in Babylon is almost over. That is certainly the tone of 40: 1-5-words of comfort forecasting a new reign but also words that call for proper preparation–that is, repentance.

Johannes Olearius (b. Halle, Germany, 1611; d. Weissenfels, Germany, 1684) originally versified the passage in German in honor of Saint John the Baptist Day and published it in his Geistliche Singe-Kunst (1671), a collection of more than twelve hundred hymns–three hundred of them by Olearius himself. Born into a family of Lutheran theologians, Olearius received his education at the University of Wittenberg and later taught theology there. He was ordained a Lutheran pastor and appointed court preacher to Duke August of Sachsen-Weissenfels in Halle and later to Duke Johann Adolph in Weissenfels. Olearius wrote a commentary on the entire Bible, published various devotional books, and produced a translation of the Imitatio Christi by Thomas a Kempis. In the history of church music Olearius is mainly remembered for his hymn collection, which was widely used in Lutheran churches.

Olearius's text was translated into English by Catherine Winkworth (b. Holborn, London, England, 1827; d. Monnetier, Savoy, France, 1878) and published in her Chorale Book for England (1863); the first line originally read "Comfort, Comfort Ye My People." Winkworth is well known for her English translations of German hymns; her translations were polished and yet remained close to the original. Educated initially by her mother, she lived with relatives in Dresden, Germany, in 1845, where she acquired her knowledge of German and interest in German hymnody. After residing near Manchester until 1862, she moved to Clifton, near Bristol.

A pioneer in promoting women's rights, Winkworth put much of her energy into the encouragement of higher education for women. She translated a large number of German hymn texts from hymnals owned by a friend, Baron Bunsen. Though often altered, these translations continue to be used in many modern hymnals. Her work was published in two series of Lyra Germanica (1855, 1858) and in The Chorale Book for England (1863), which included the appropriate German tune with each text as provided by Sterndale Bennett and Otto Goldschmidt. Winkworth also translated biographies of German Christians who promoted ministries to the poor and sick and compiled a handbook of biographies of German hymn authors, Christian Singers of Germany (1869).

Liturgical Use:
Traditional during Advent as applicable to Isaiah's and John the Baptist's calls to repentance.

Louis Bourgeois (PHH 3) composed or adapted this tune for Psalm 42 for the Genevan psalter. The 1564 harmonization by Claude Goudimel (PHH 6) originally placed the melody in the tenor. An alternate harmonization with descants by Johann Crüger (PHH 42) can be found opposite 41 in the Psalter Hymnal. (See also notes at PHH 42.)

Since the character of Isaiah 40 is very different from the lament of Psalm 42, for which the tune was written, the tempo should be faster here than at 42. Sing with a buoyant and lilting rhythm. Organists will find preludes to this tune under GENEVAN 42 in Dutch works or under FREU DICH SEHR in German works.