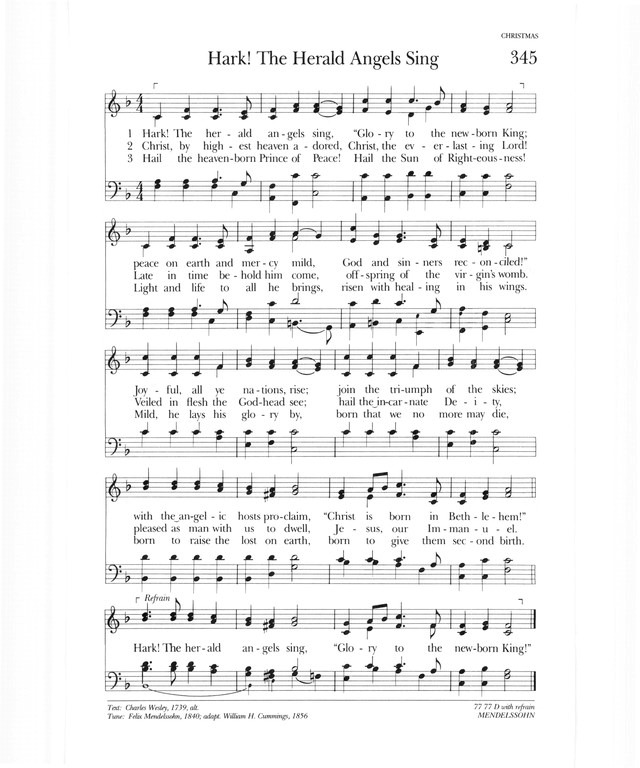 1 Hark! the herald angels sing,
"Glory to the newborn King;
peace on earth and mercy mild,
God and sinners reconciled!"
Joyful, all ye nations, rise;
join the triumph of the skies;
with the angelic hosts proclaim,
"Christ is born in Bethlehem!"


2 Christ, by highest heaven adored,
Christ, the everlasting Lord!
Late in time behold him come,
offspring of the virgin's womb.
Veiled in flesh the Godhead see;
hail the incarnate Deity,
pleased as man with us to dwell,
Jesus, our Immanuel. Refrain


3 Hail the heaven-born Prince of Peace!
Hail the Sun of Righteousness!
Light and life to all he brings,
risen with healing in his wings.
Mild, he lays his glory by,
born that we no more may die,
born to raise the lost on earth,
born to give them second birth. Refrain

Charles Wesley (PHH 267) wrote this text in ten four-line stanzas and published it in Hymns and Sacred Poems (1739). Originally entitled "Hymn for Christmas Day," this most popular of Wesley's Christmas hymns began with the following words:

Hark, how all the welkin [heavens] rings
Glory to the King of Kings.

George Whitefield changed the first line to "Hark! The herald angels sing" and published the text with additional alterations in his Collection (1753). In 1782 the revised opening couplet became repeated as the refrain. The text was extensively changed and shortened by various other eighteenth-century editors as well. With a few word changes the Psalter Hymnal version is essentially the same as the one published in John Kempthorne's Select Portions of Psalms… and Hymns (1810).

Containing biblical phrases from Luke, John, and Paul, the text is a curious mixture of exclamation, exhortation, and theological reflection. The focus shifts rapidly from angels, to us, to nations. The text's strength may not lie so much in any orderly sequence of thought but in its use of Scripture to teach its theology. That teaching surely produces in us a childlike response of faith; we too can sing "Glory to the newborn King!"

Liturgical Use:
Christmas Day; another of the "must" hymns for an annual lesson/ carol festival.

The tune is from the second chorus of Felix Mendelssohn's (PHH 279) Festgesang (Op. 68) for male voices and brass; it was first performed in 1840 at the Gutenberg Festival in Leipzig, a festival celebrating the anniversary of Gutenberg's invention of the printing press. Mendelssohn's tune is similar to another that appeared one hundred years earlier in 'The Song of Mars" from the John Pepusch opera Venus and Adonis.

Mendelssohn once wrote of this music, "It will never do to sacred words." William H. Cummings (b. Sidbury, Devonshire, England, 1831; d. Dulwich, London, England, 1915) may not have been aware of Mendelssohn’s opinion; he adapted the tune to Wesley's text in 1856. When they were placed together in Hymns Ancient and Modern (1861), "Hark! The Herald Angels Sing" became a very popular hymn.

Cummings had a lifelong love of Felix Mendelssohn, sparked when he sang at age sixteen in the first London performance of Elijah, which was directed by Mendelssohn himself. As a young boy, Cummings had been a chorister at St. Paul's Cathedral and later sang in the choirs of the Temple Church, Westminster Abbey, and the Chapel Royal. Cummings became a famous tenor–he sang in oratorios and was especially known for his evangelist role in the Bach passions. He taught voice at the Royal Academy of Music and the Royal Normal College and School for the Blind in London and was also an accomplished organist. Cummings wrote books and articles on music history, wrote a biography of Henry Purcell and edited his music, and composed many choral pieces.

MENDELSSOHN is an excellent match for Wesley's text. It is a rousing tune, even martial in some of its phrases. Sing with lots of enthusiasm; do not drown out the stanzas with too much organ–save that extra stop for the refrain and the final stanza. Let the final stanza soar with the descant and the alternate harmonization by David Willcocks (b. Newquay, England, 1919), published in Carols for Choir 1(1961). Willcocks has had a highly distinguished musical career. A chorister at Westminster Abbey, he continued his education at Clifton College, the Royal College of Music, and King's College, Cambridge, England. He was organist of Worcester Cathedral (1950-1957) and conductor of the Bradford Festival Choral Society (1955-1974). Under his leader¬ship as director of music and organist of King's College, Cambridge, from 1957 to 1974, the King's College Choir began a series of recordings which, among other repertoires, made famous the annual Festival of Lessons and Carols. Beginning in 1960 Willcocks conducted the Bach Choir of London, and in 1973 he became director of the Royal College of Music. Mainly a composer of church music, Willcocks has also made arrangements of carols, many of which were published in the various Oxford's Carols for Choirs publications. He makes frequent trips to North America for choral festivals.