Hark! the herald angels sing Glory to the new-born King

1 Hark! the herald angels sing,
"Glory to the newborn King:
peace on earth, and mercy mild,
God and sinners reconciled!"
Joyful, all ye nations, rise,
join the triumph of the skies;
with th'angelic hosts proclaim,
"Christ is born in Bethlehem!"


2 Christ, by highest heaven adored,
Christ, the everlasting Lord,
late in time behold him come,
offspring of the Virgin's womb:
veiled in flesh the Godhead see;
hail th'incarnate Deity,
pleased with us in flesh to dwell,
Jesus, our Immanuel. [Refrain]


3 Hail the heaven-born Prince of Peace!
Hail the Sun of Righteousness!
Light and life to all he brings,
risen with healing in his wings.
Mild he lays his glory by,
born that we no more may die,
born to raise us from the earth,
born to give us second birth. [Refrain]

Charles Wesley (PHH 267) wrote this text in ten four-line stanzas and published it in Hymns and Sacred Poems (1739). Originally entitled "Hymn for Christmas Day," this most popular of Wesley's Christmas hymns began with the following words:

Hark, how all the welkin [heavens] rings
Glory to the King of Kings.

George Whitefield changed the first line to "Hark! The herald angels sing" and published the text with additional alterations in his Collection (1753). In 1782 the revised opening couplet became repeated as the refrain. The text was extensively changed and shortened by various other eighteenth-century editors as well. With a few word changes the Psalter Hymnal version is essentially the same as the one published in John Kempthorne's Select Portions of Psalms… and Hymns (1810).

Containing biblical phrases from Luke, John, and Paul, the text is a curious mixture of exclamation, exhortation, and theological reflection. The focus shifts rapidly from angels, to us, to nations. The text's strength may not lie so much in any orderly sequence of thought but in its use of Scripture to teach its theology. That teaching surely produces in us a childlike response of faith; we too can sing "Glory to the newborn King!"

Liturgical Use:
Christmas Day; another of the "must" hymns for an annual lesson/ carol festival.

The tune is from the second chorus of Felix Mendelssohn's (PHH 279) Festgesang (Op. 68) for male voices and brass; it was first performed in 1840 at the Gutenberg Festival in Leipzig, a festival celebrating the anniversary of Gutenberg's invention of the printing press. Mendelssohn's tune is similar…

All tunes published with 'Hark! The Herald Angels Sing'^ top

This hymn by Charles Wesley was written within a year of Wesley’s conversion. Thus, as Albert Bailey writes, “the inspiration of his newly-made contact with God was still fresh” (The Gospel in Hymns, 100). Rather than simply tell the nativity story, Wesley pours theological truths into this text. The first verse tells the story of the angels proclaiming Christ’s birth, and the second and third verse go on to make it very clear why the angels sang. Simply by describing Christ, Wesley tells us the entire Gospel story. We are told of Christ’s nature, his birth and incarnation, his ministry, and his salvific purpose. The Psalter Hymnal Handbook describes the hymn like this: “A curious mixture of exclamation, exhortation, and theological reflection. The focus shifts rapidly from angels, to us, to nations. The text’s strength may not lie so much in any orderly sequence of thought but in its use of Scripture to teach its theology. That teaching surely produces in us a childlike response of faith; we too can sing ‘Glory to the newborn King!’”

Charles Wesley’s hymn of ten stanzas of four lines each, published in 1739, originally began with, “Hark, how all the welkin [heaven/sky] rings.” In 1753, George Whitefield altered that line to “Hark! The herald angels sing,” and his first line and title have been used ever since.” It has since gone through many revisions, presumably much to the posthumous chagrin of Wesley, who asked that people only “add the true reading in the margin, or at the bottom of the page, that we may no longer be accountable either for the nonsense or for the doggerel of other men” (Lutheran Hymnal Handbook). There are many differences in word choice or arrangement of lines and phrases. For example, the Episcopal Hymnal switched what is commonly the first and second half of verse three around, so that the stanza begins, “Mild he lays his glory by….” Other alterations include changing archaic or gender exclusive language.

The pairing of this tune with Wesley’s text is almost comical. MENDELSSOHN comes from Felix Mendelssohn’s Festgesang. Mendelssohn actually wrote that the tune would “never do to sacred words,” arguing instead that “there must be a national and merry subject found out, something to which the soldier-like and boxom motion of the piece has some relation, and the words must express something gay and popular as the music tries to do” (Lutheran Hymnal Handbook). Taking absolutely no heed of those words, William Cummings adapted the tune to fit Wesley’s text in 1856. A popular descant and harmonization was later composed by Sir David Willcocks. Most arrangements are very similar – brass or strings as an accompaniment (or a majestic organ or piano). One possibility to add even more interest is to use the melody underneath the “Glorias” from “Angels We Have Heard on High” as an interlude between verses.

This popular Christmas hymn can be used in any service during the Christmas season, but is particularly popular on Christmas morning. The theologically rich nature of the hymn makes it a good candidate for being sung after the Gospel reading or before the sermon, since there are a number of truths found within the text for a preacher to expound upon – it offers a number of directions in which to take a sermon during a season that many pastors dread in their efforts to be creative. 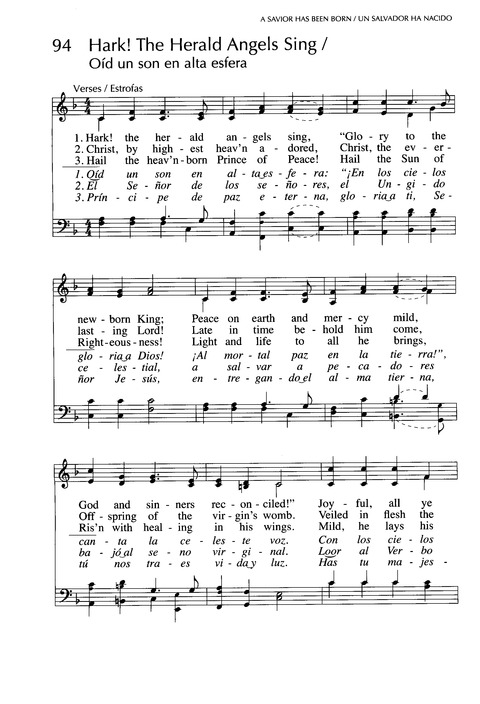 A New Hymnal for Colleges and Schools #231

Hymns for a Pilgrim People #123

Hymns of the Christian Life #59

Rock of Ages A Worship and Songbook for Retirement Living #54

The Hymnal for Worship and Celebration #133

The Sacred Harp #81b

The Song Book of the Salvation Army #82

Include 1144 pre-1979 instances
All instances^ top
Suggestions or corrections? Contact us