502. The Church's One Foundation 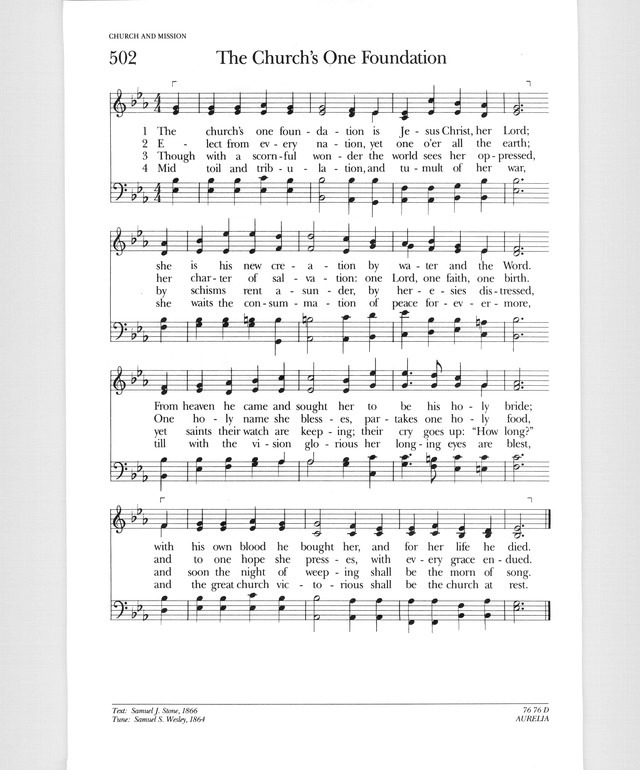 1 The church's one foundation
is Jesus Christ, her Lord;
she is his new creation
by water and the Word.
From heaven he came and sought her
to be his holy bride;
with his own blood he bought her,
and for her life he died.


2 Elect from every nation,
yet one o'er all the earth;
her charter of salvation:
one Lord, one faith, one birth.
One holy name she blesses,
partakes one holy food,
and to one hope she presses,
with every grace endued.


3 Though with a scornful wonder
the world sees her oppressed,
by schisms rent asunder,
by heresies distressed,
yet saints their watch are keeping;
their cry goes up: "How long?"
and soon the night of weeping
shall be the morn of song.


4 Mid toil and tribulation,
and tumult of her war,
she waits the consummation
of peace forevermore,
till with the vision glorious
her longing eyes are blest,
and the great church victorious
shall be the church at rest.

This well-known hymn arose out of a theological controversy in the mid-nineteenth century. John W. Colenso, Anglican bishop of Natal, South Africa, wrote a book that expressed critical views of the historicity of parts of Scripture and questioned some articles of the Christian faith. Samuel J. Stone (b. Whitmore, Staffordshire, England, 1839; d. London, England, 1900), a clergyman in Windsor, England, was one of the people who defended the orthodox Christian faith. He did so in part by publishing his Lyra Fidelium; Twelve Hymns on the Twelve Articles of the Apostles' Creed (1866). “The Church's One Foundation” was his hymn on the article "the holy catholic church, the communion of saints." Stone's text originally had seven stanzas, but he added three more in 1885 for processional use at Salisbury Cathedral. Of those ten stanzas, 1, 2, 4, and 5 are the usual stanzas included in modern hymnals.

The text portrays the Christian church as rooted in the Savior, Jesus Christ, through the water of baptism and the Word of God (st. 1). In accord with the ninth article of the Apostles' Creed, we confess through this text that the church is catholic (universal) and united by "one Lord, one faith, one baptism" (Eph. 4:5). As we sing, we lament the "heresies" that "distress" the church (st. 3); although this is a direct reference to the Colenso controversy, the stanza fits many other situations in church history as well. The final stanza ends on a hopeful tone: the church will finally be at peace and at rest.

Stone attended schools at Charterhouse and Pembroke College in Oxford, England. Ordained in the Church of England in 1862, he became curate of Windsor, a position he held until he joined his father in ministry at St. Paul's in Haggerston, London, in 1870. He succeeded his father as vicar at Haggerston in 1874, staying until 1890. From 1890 until his death he served All-Hallow-on-the-Wall in London, which he turned into a haven for working girls and women. In addition to his collection of hymns, Stone's publications include Sonnets of the Christian Year (1875), Hymns (1886), and Iona (1898). He served as a member of the committee that prepared Hymns Ancient and Modern (1909). His Collected Hymns and Poems were published posthumously.

Composed by Samuel S. Wesley (PHH 206), AURELIA (meaning "golden") was published as a setting for “Jerusalem the Golden” in Selection of Psalms and Hymns, which was compiled by Charles Kemble and Wesley in 1864. Though opinions vary concerning the tune's merits (Henry J. Gauntlett once condemned it as "secular twaddle"), it has been firmly associated with Stone's text since tune and text first appeared together in the 1868 edition of Hymns Ancient and Modern. However, Erik Routley (PHH 31) suggests rejuvenating this text by singing it to ST. THEODULPH (375/376).

Sing stanzas 1-3 in parts and stanza 4 in unison. Support with crisp organ articulation on the repeated soprano tones.