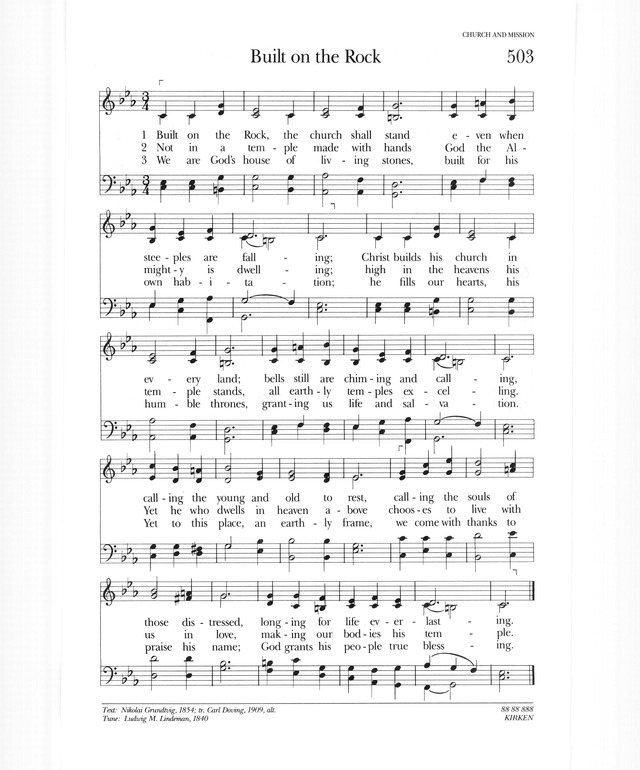 1 Built on the Rock, the church shall stand
even when steeples are falling;
Christ builds his church in every land;
bells still are chiming and calling,
calling the young and old to rest,
calling the souls of those distressed,
longing for life everlasting.


2 Not in a temple made with hands
God the Almighty is dwelling;
high in the heavens his temple stands,
all earthly temples excelling.
Yet he who dwells in heaven above
chooses to live with us in love,
making our bodies his temple.


3 We are God's house of living stones,
built for his own habitation;
he fills our hearts, his humble thrones,
granting us life and salvation.
Yet to this place, an earthly frame,
we come with thanks to praise his name;
God grants his people true blessing.

This hymn is a great favorite among Scandinavian Christians, second only to Martin Luther's "A Mighty Fortress." Written by Nicolai F. S. Grundtvig (PHH 360) in seven stanzas ("Kirken den er et gammelt Hus"), the text was published in Sang-Värk til den Danske Kirke (1837) and later revised by Grundtvig for publication in the 1854 edition of his Festsalmer.

Carl Döving (b. Norddalen, Norway, 1867; d. Chicago, IL, 1937) translated Grundtvig's hymn in 1909. Döving immigrated to the United States in 1890 and studied at Luther College, Decorah, Iowa, and Luther Seminary, St. Paul, Minnesota. He served Lutheran parishes in Minnesota and New York and concluded his career as a city missionary in Chicago. A competent linguist and fine hymnologist, he contributed more than thirty-two English translations of German and Scandinavian hymns to The Lutheran Hymnary (1913), including "Built on the Rock."

The current version is a revision of Döving's translation prepared by Fred C. M. Hansen for the Hymnal for Church and Home (1927). This text may well have been the model for the modern hymn "I Am the Church, You Are the Church" by Richard Avery and Donald Marsh (1972).

Drawing on biblical texts, "Built on the Rock" emphasizes certain characteristics of the Christian church: Christ is the foundation and builder of his church (st. 1); the church is not primarily a building but people loved and inhabited by God (st. 2); these people are blessed through their whole-life worship of God (st. 3).

Composed for this text by Ludwig M. Lindeman (b. Trondheim, Norway, 1812; d. Oslo, Norway, 1887), KIRKEN was published in Wilhelm A. Wexel's Christelige Psalmer (1840). A bar form (AAB) tune in the Dorian mode, it is a suitably rugged, folk-like tune for this text, with a satisfying climax in line 6. Sing in harmony throughout and support with energetic accompaniment.

KIRKEN (also called LINDEMAN) was the first hymn tune Lindeman wrote. Born into a family of musicians, Lindeman received his early organ training from his father, for whom he became a substitute organist at the age of twelve. Although he studied theology in Oslo (then called Christiana), after 1839 he turned to a career in music. He was the organist of the Church of the Savior in Oslo (1839-1887) and became a virtuoso performer. In 1871 he was invited to come to London to give inaugural recitals on the new organ in Albert Hall. Lindeman published hymn collections and organ works as well as the influential Koralbog (1877), which contained tunes (restored to rhythmic shape) for Landstad's hymnal of 1869. He was also an excellent teacher and founded an organ school (later the Oslo Conservatory) with his son in 1883. A scholarly collector of Norwegian folk music, Lindeman traveled the country collecting folk songs, which he published in a series of volumes (1853-1867) and which influenced the works of composer Edvard Grieg.