The Church's one foundation

The Church's one foundation Is Jesus Christ her Lord

1 The church’s one foundation
is Jesus Christ, our Lord;
we are a new creation
by water and the Word.
From heav’n he came and taught us
what perfect love can be;
through life and death he sought us,
and rose to set us free.


2 The church in ev’ry nation
is one through all the earth;
our charter of salvation,
one God, one faith, one birth;
one name together blessing,
one holy food we share,
to one hope ever pressing,
at one in work and prayer.


3 Still, schisms, tribulation,
and hatred fuel our war;
we wait the consummation
of peace forevermore.
The saints their watch are keeping;
their cry goes up, “How long?”
And soon the night of weeping
shall be the morn of song.


4 Yet we on earth have union
with God, the Three in One,
and mystic, sweet communion
with those whose rest is won.
Oh, happy ones and holy!
God, give us grace that we,
like them, the meek and lowly,
may live eternally. 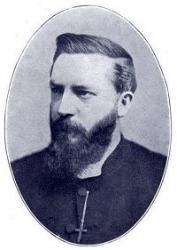 Stone, Samuel John, a clergyman of the Church of England, the son of Rev. William Stone, was born at Whitmore, Staffordshire, April 25, 1839. He was educated at Pembroke College, Oxford, where he was graduated B.A. in 1862. Later he took orders and served various Churches. He succeeded his father at St. Paul's, Haggerstown, in 1874. He was the author of many original hymns and translations, which were collected and published in 1886. His hymns are hopeful in spirit and skillfully constructed. He published several poetic volumes. He died November 19, 1900 --Hymn Writers of the Church, 1915 (Charles Nutter)… Go to person page >
^ top

This well-known hymn arose out of a theological controversy in the mid-nineteenth century. John W. Colenso, Anglican bishop of Natal, South Africa, wrote a book that expressed critical views of the historicity of parts of Scripture and questioned some articles of the Christian faith. Samuel J. Stone (b. Whitmore, Staffordshire, England, 1839; d. London, England, 1900), a clergyman in Windsor, England, was one of the people who defended the orthodox Christian faith. He did so in part by publishing his Lyra Fidelium; Twelve Hymns on the Twelve Articles of the Apostles' Creed (1866). “The Church's One Foundation” was his hymn on the article "the holy catholic church, the communion of saints." Stone's text originally had seven stanzas, but he added three more in 1885 for processional use at Salisbury Cathedral. Of those ten stanzas, 1, 2, 4, and 5 are the usual stanzas included in modern hymnals.

The text portrays the Christian church as rooted in the Savior, Jesus Christ, through the water of baptism and the Word of God (st. 1). In accord with the ninth article of the Apostles' Creed, we confess through this text that the church is catholic (universal) and united by "one Lord, one faith, one baptism" (Eph. 4:5). As we sing, we lament the "heresies" that "distress" the church (st. 3); although this is a direct reference to the Colenso controversy, the stanza fits many other situations in church history as well. The final stanza ends on a hopeful tone: the church will finally be at peace and at rest.

Stone attended schools at Charterhouse and Pembroke College in Oxford, England. Ordained in the Church of England in 1862, he became curate of Windsor, a position he held until he joined his father in ministry at St. Paul's in Haggerston, London, in 1870. He succeeded his father as vicar at Haggerston in 1874, staying until 1890. From 1890 until his death he served All-Hallow-on-the-Wall in London, which he turned into a haven for working girls and women. In addition to his collection of hymns, Stone's publications include Sonnets of the Christian Year (1875), Hymns (1886), and Iona (1898). He served as a member of the committee that prepared Hymns Ancient and Modern (1909). His Collected Hymns and Poems were published posthumously.

The Church's one Foundation. S. J. Stone. [Processional for Festivals.] The impression made upon the author's mind by Bishop Gray's (Capetown) noble defence of the Catholic Faith against the teachings of Bishop Colenso, was in chief the origin of this magnificent hymn. It has thus associations of historical value, to which special reference is made in the stanza:—

”Though with a scornful wonder
Men see her sore opprest,
By schisms rent asunder,
By heresies distrest;
Yet saints their watch are keeping
Their cry goes up,”How long?”
And soon the night of weeping
Shall be the morn of song."

The hymn was written in 1866, and is based on the ninth article of the Apostles' Creed. It is known in three forms, (1) the original, which was published in the author's Lyra Fidelium, 1866, in 7 stanzas of 8 lines, and headed "The Holy Catholic Church: The Communion of Saints. ‘He is the Head of the Body, the Church'"; (2) the revised form in 5 st.anzas of 8 lines, made in 1868 for, and published in the Appendix to Hymns Ancient & Modern, No. 320 (the form in universal use); and (3) the expanded text in 10 stanzas of 8 lines, made in 1885 for Processional use in Salisbury Cathedral.

Further reference to the full text shew that the 1868 version of the hymn is the finest of the three, and that which will live in the hymnbooks of the future. The use of this form of the text is most extensive in all English-speaking countries. It has also been translated into several European and other languages. The versions in Latin include "Nobis unum est fundamen," by the Rev. E. Marshall, 1882 (and circulated as a card); and "Qui Ecclesiam instauravit,” by the late T. G. Godfrey-Faussett, in Memorials, 1878. In reference to the fact that this hymn was chosen as the Processional at each of the three great services at Canterbury Cathedral, at Westminster Abbey, and St. Paul's Cathedral, when all the Bishops of the Lambeth Conference of 1888 assembled, the following lines were written by Bishop Nelson, of New Zealand. They appeared in Church Bells of Nov. 30, 1888.

"Bard of the Church, in these divided days
For words of harmony to thee be praise:
Of love and oneness thou didst strike the chords,
And set our thoughts and prayers to tuneful words.
The Church's one Foundation thou didst sing,
Beauty and Bands to Her thy numbers bring.
Through church and chancel, aisle, and transept deep,
In fullest melody thy watch-notes sweep;
Now in the desert, now upon the main,
In mine and forest, and on citied plain:
From Lambeth towers to far New Zealand's coast,
Bard of the Church, thy blast inspires the host."

All tunes published with 'The Church's one foundation'^ top

In the mid-nineteenth century, Bishop John William Colenso of Natal raised a ruckus in the Catholic Church when he challenged the historicity and authority of many of the Old Testament books. Bishop Gray of Capetown wrote a stirring response of defense, which, in 1866, inspired Samuel Stone, to write this beloved hymn, basing his text on Article 9 of the Apostle’s Creed: “The Holy Catholic (Universal) Church; the Communion of Saints; He is the Head of this Body.” Now an affirmation of Christ as the foundation of our faith, we sing this hymn with those who have gone before us and with Christians around the world, declaring that beyond any theological differences, cultural divides, and variances in practice, we are all part of the same body, the body of Christ.

The actual words have not changed much from Stone’s original text, though there are differences in what verses are sung. Stone’s hymn originally consisted of seven stanzas, to which he added three more, and today most hymnals include the original 1, 2, 4, 5, and 6, though not every hymnal contains all five. In the first two verses, we proclaim our unity as the Church in Christ, through baptism, the Word, and Communion. In stanza 3 and 4, we pray that divisions might cease and we would fully experience that unity, and in verse 5, we acknowledge the unity greater than the sum of individual people, our fellowship with God, the Three in One.

The tune that most often accompanies this text is AURELIA, composed in 1864 by Samuel S. Wesley and first published as a setting for “Jerusalem the Golden.” It was paired with Stone’s text shortly after, to the chagrin of some: Dr. Henry Gauntlett was apparently very annoyed by this match-up, as he thought Wesley’s tune was “inartistic, secular twaddle.” Dr. Gauntlett was not to have the last word however, and the tune has stuck. Still not a favorite of some, there have been a few revisions: Erik Routley suggests singing the text to the tune ST. THEODULPH. Brian Moss, for Indelible Grace, composed a new tune that at the same time expresses a prayer for unity, and the assurance of Christ, in its quiet but confident melody.

This hymn is especially fitting for the ending of communion, a celebration of our unity in the body and blood of Christ. It can also be sung as a response to declarations of our faith, such as the creeds, a Scripture passage, or a sermon. In the liturgical calendar, it is particularly appropriate for world communion Sundays. In Sing a New Creation #177, there is a Chinese version of the text, which focuses more on persecution rather than schisms. If you want to celebrate our world-wide unity in Christ, but don’t have the resources to do non-Western music, using the Chinese text with the familiar tune is an excellent option. 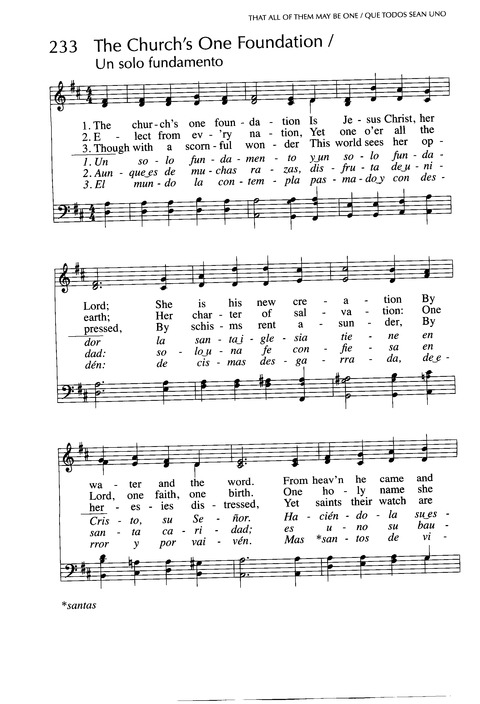 Hymns for a Pilgrim People #484

Hymns of the Christian Life #395

Sacred Selections for the Church #213

Display Title: The Church’s one Foundation First Line: The church’s one foundation Date: 2012
The Family Hymnal #28

The Hymnal for Worship and Celebration #277

The United Methodist Hymnal #546b