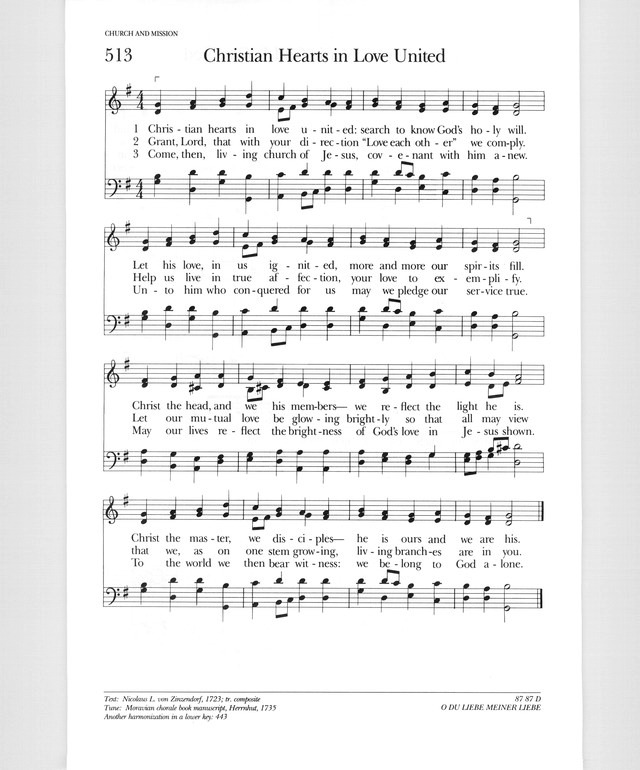 1 Christian hearts in love united:
search to know God's holy will.
Let his love, in us ignited,
more and more our spirits fill.
Christ the head, and we his members
we reflect the light he is.
Christ the master, we disciples
he is ours and we are his.


2 Grant, Lord, that with your direction
"Love each other" we comply.
Help us live in true affection,
your love to exemplify.
Let our mutual love be glowing
brightly so that all may view
that we, as on one stem growing,
living branches are in you.


3 Come, then, living church of Jesus,
covenant with him anew.
Unto him who conquered for us
may we pledge our service true.
May our lives reflect the brightness
of God's love in Jesus shown.
To the world we then bear witness:
we belong to God alone.

Zinzendorfs career, achievements, and influence were of great import, both in his own community and worldwide. Although his family insisted that he be trained in law, his inclination was always toward religious matters. A devout youth who was influence by Philipp Spener and the Pietists, he wrote his first hymn at the age of twelve. After his graduation from Wittenberg University in 1719, he became the official poet for the Saxon court.

His life took focus in 1722 when a small group of persecuted Bohemian Brethren, or Moravians (spiritual descendants of John Hus), sought a place of refuge. Zinzendorf granted them protection on his estate in Bertelsdorf; they called their new home "Herrnhut," or "the Lord's shelter." The settlement grew to over two hundred homes and became an outstanding Christian community of piety, worship, and mission. Some of these missionaries influenced John and Charles Wesley (PHH 267). Zinzendorf became their bishop in 1737 but then was banished for a decade from Saxony by Saxon officials because of his evangelical convictions; he returned to Herrnhut in 1748. During his banishment he traveled throughout Europe, to St. Petersburg in Russia, and to the United States and the West Indies in order to establish and encourage Moravian mission centers.

He promoted the tradition of congregational singing at Herrnhut and elsewhere and frequently led long hymn sings in an improvised medley format, which included hymn fragments or choruses. Some two thousand hymn texts are attributed to him, but many are judged to be too subjective for congregational use today. Das Gesang-Buch der Gemeine Herrnhut (1735), with its almost one thousand texts, was compiled under his supervision and contained some two hundred of his own hymns. He also produced a two-volume hymnal in London, Alt- und Neuer Bruder-Gesang (1753-1754), which contained over three thousand German hymn texts grouped in chronological order.

The three stanzas in the Psalter Hymnal come from a composite translation that depends on English versions by Frederick W. Foster and John Miller (Johannes Muller) in the Moravian Hymn Book (1789, with revisions in the 1886 ed.) and by Walter Klaassen in The Mennonite Hymnal (1969). This text gained great significance at the Herrnhut settlement, where it was often used after the healing of internal conflict.

This distinguished text about the church's "communion of saints" proclaims that Christians live in union with Christ (st. 1), love each other (st. 2), and serve and witness in the world (st. 3).

This rounded bar form tune (AABA) with mostly stepwise motion has a harmonization that invites part singing. Organ accompaniment should use a moderate registration. Because the middle stanza is a sung prayer to God, try singing it unaccompanied.