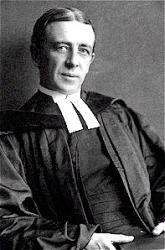 Benson, Louis FitzGerald, D.D., was born at Philadelphia, Penn., July 22, 1855, and educated at the University of Penn. He was admitted to the Bar in 1877, and practised until 1884. After a course of theological studies he was ordained by the Presbytery of Philadelphia North, in 1888. His pastorate of the Church of the Redeemer, Germantown, Phila., extended from his ordination in 1888 to 1894, when he resigned and devoted himself to literary and Church work at Philadelphia. He edited the series of Hymnals authorised for use by the General Assembly of the Presbyterian Church in the U.S.A., as follows:—
(1) The Hymnal, Phila., 1895; (2) The Chapel Hymnal, 1898; and (3) The School Hymnal, 1899.
Dr. Benson's hymnological writings are somewhat extensive. They include:—
(1) Hymns and Verses (original and translations), 1897; (2) The Best Church Hymns, 1898; (3) The Best Hymns, 1898; (4) Studies of Familiar Hymns, 1903, &c.
Of his original hymns the following have come into American common use:—
I. In The Hymnal, 1895:—
1. O Christ, Who didst our tasks fulfil. For Schools and Colleges. Written in 1894.
2. O risen Christ, Who from Thy throne. For Installation of a Pastor. Written in 1894.
II. In The School Hymnal, 1899:—
3. A glory lit the wintry sky. Loneliness of Jesus. Written in 1897.
4. Happy town of Salem. Heaven.
5. Now the wintry days are o'er. Easter.
6. O sing a song of Bethlehem. Early Life of Jesus.
7. Open the door to the Saviour. Invitation.
8. Out of the skies, like angel eyes. Lullaby.
9. Who will teach me how to pray? Prayer. In Carey Bonner's Sunday School Hymnary, 1905:—
10. The sun is on the land and sea. Morning.
11. Our wilful hearts have gone astray. Penitence.
12. When I awake from slumber. Morning.
Of the above, Nos. 1-4, 10-12 are from Hymns and Verses, 1897. In the above collection by C. Bonner, Nos. 1, 4, and 6 are also found. Of Dr. Benson's translations from the Latin one only is in common use. See "Plaudite coeli, Rideat aether."
As a hymn writer Dr. Benson is not widely known, mainly through the recent publication of his verse. His hymns deserve attention, and will, no doubt, gain the public ear in due time; whilst his hymnological researches and publications are thorough and praiseworthy.

Establishing a Canon of Common Hymn Texts: the contributions of Louis F. Benson by Paul R. Powell (from The Hymn)
TextsTunesHymnals