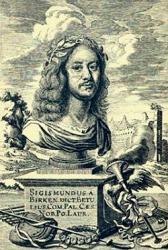 Birken, Sigismund von, son of Daniel Betulius or Birken, pastor at Wildstein, near Eger, in Bohemia, was born at Wildstein, May 5, 1626. In 1629 his father, along with other Evangelical pastors, was forced to flee from Bohemia, and went to Nürnberg. After passing through the Egidien-Gymnasium at Nürnberg Sigismund entered the University of Jena, in 1643, and there studied both Law and Theology, the latter at his father's dying request. Before completing his course in either he returned to Nürnberg, in 1645, and on account of his poetical gifts was there admitted a member of the Pegnitz Shepherd and Flower Order. At the close of 1645 he was appointed tutor at Wolfenbiittel to the Princes of Brunswick-Luneburg, but after a year (during which he was crowned as a poet), he resigned this post. After a tour, during which he was admitted by Philipp v. Zesen as a member of the German Society (or Patriotic Union), he returned to Nürnberg in 1648, and employed himself as a private tutor. In 1654 he was ennobled on account of his poetic gifts by the Emperor Ferdinand III., was admitted in 1658 as a member of the Fruitbearing Society, and on the death of Harsdörffer, in 1662; became Chief Shepherd of the Pegnitz Order, to which from that time he imparted a distinctly religious cast. He died at Nürnberg, June 12, 1681. (Koch, iii. 478-485; Allgemeine Deutsche Biog., ii. 660; Bode, pp. 44-46; the first dating his death, July, and the last dating his birth, April 25). In his 52 hymns he was not able to shake off the artificial influences of the time, and not many of them have retained a place in German common use. Three have been translated into English:—
i. Auf, auf, mein Herz und du mein ganzer Sinn, Wirf alles heut. [Sunday.] First published (not in 1661, but) in Saubert's Gesang-Buch, Nürnberg, 1076, No. 329, in 10 stanzas. Translated as:—
(1) "Arouse thee up! my Heart, my Thought, my Mind," by H. J. Buckoll, 1842, p. 10. (2) "Awake! awake!—to holy thought aspire," by Dr. H. Mills, 1856.
ii. Jesu, deine Passion. [ Passiontide.] His finest hymn, first published in Saubert's Gesang-Buch, Nürnberg, 1676, No. 83, in 6 stanzas of 8 lines, and included as No. 240 in the Berlin Geistliche Lieder ed., 1863. It did not appear in 1653. Translated as:—
Jesu! be Thy suffering love. A good translation of stanzas i.-iv., by A. T. Russell, as No. 87 in his Psalms and Hymns, 1851. Another translation is:—
"Jesus, on Thy dying love," by W. Reid, in the British Herald, March, 1865, p. 46, repeated in his Praise Book, 1872, No. 435.
iii. Lasset uns mit Jesu ziehen. [Passiontide .] First published in J. M. Dilherr's Heilige Karwochen, Nürnberg, 1653, p. 412, in 4 stanzas of 8 lines. Included as No. 250 in the Berlin Geistliche Lieder, ed. 1863. The only translation in common use is:—
Let us hence, on high ascending . Good and full, by A. T. Russell, as No. 184 in his Psalms & Hymns, 1851. His translations of stanzas iii., iv., were adopted and altered to "Let us now with Christ be dying," as No. 635 in Kennedy, 1863. [Rev. James Mearns, M.A.]

Sigmund von Birken (25 April 1626 – 12 June 1681) was a German poet of the Baroque. He was born in Wildstein, near Eger, and died in Nuremberg, aged 55. His pupil, Sibylle Ursula von Braunschweig-Lüneburg wrote part of a novel, Die Durchlauchtige Syrerin Aramena (Aramena, the noble Syrian lady), which when complete would be the most famous courtly novel in German Baroque literature; it was finished by her brother Anton Ulrich and edited by Sigmund von Birken.
Wikipedia Biography
TextsTunesHymnals