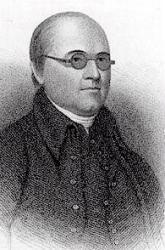 Timothy Dwight (b. Northampton, MA, 1752; d. Philadelphia, PA, 1817) was a grandson of Jonathan Edwards who became a Congregationalist pastor, a Revolutionary War army chaplain, a tutor and professor at Yale College, and president of Yale from 1795 to 1817. As president he continued to teach and serve as chaplain and was instrumental in improving both the academic and the spiritual life of the college.

Bert Polman
===============
Dwight, Timothy, D.D. This is the most important name in early American hymnology, as it is also one of the most illustrious in American literature and education. He was born at Northampton, Massachusetts, May 14, 1752, and graduated at Yale College, 1769; was a tutor there from 1771 to 1777. He then became for a short time a chaplain in the United States Army, but passed on in 1783 to Fairfield, Connecticut, where he held a pastorate, and taught in an Academy, till his appointment, in 1795, as President of Yale College. His works are well known, and need no enumeration. He died at New Haven, Jan. 11, 1817. In 1797 the General Association of Connecticut, being dissatisfied with Joel Barlow's 1785 revision of Watts, requested Dwight to do the work de novo. This he did liberally, furnishing in some instances several paraphrases of the same psalm, and adding a selection of hymns, mainly from Watts. The book appeared as—

"The Psalms of David, &c.... By I. Watts, D.D. A New Edition in which the Psalms omitted by Dr. Watts are versified, local passages are altered, and a number of Psalms are versified anew in proper metres. By Timothy Dwight, D.D., &c….To the Psalms is added a Selection of Hymns," 1800.

Dwight's lyrics are all professedly psalms, but they are by no means literal versions. His original compositions number 33. Of these many are still in common use, the most important being:—
1. Blest be the Lord, Who heard my prayer. Psalm xxviii. This is the second part of Psalm xxviii., in 5 stanzas of 4 lines. It is in the English New Congregational Hymn Book, 1859.
2. I Love Thy kingdom, Lord. Psalm cxxxvii. This is version three of Ps. 137, in 8 stanzas of 4 lines, and is in extensive use at the present time throughout the States. It is also included in many English, Irish, and Scottish collections, sometimes in the original form, as in Alford's Year of Praise, 1867; again as, "I love Thy Church, 0 God," which opens with the second stanza, as in the Scottish Evangelical Union Hymnal, 1878, in 3 stanzas, and "We love Thy kingdom, Lord," in the Irish Church Hymnal, 1873. In Cleveland's Lyra Sacra Americana six stanzas only are given from the original.

Next to this in popularity are his 2nd and 3rd renderings of Psalm lxxxviii.:—
3. Shall man, 0 God of life and light. (3rd stanza)
4. While life prolongs its precious light. (2nd stanza) Both of which are in extensive use. From his 4th version of the same Psalm (88), the following hymns have been compiled, each opening with the stanza indicated:—
5. Just o'er the grave I hung. Stanza ii.
6. I saw beyond the tomb. Stanza iv.
7. Ye sinners, fear the Lord. Stanza xii. This last is found in Spurgeon's 0ur Own Hymnbook. The original version consists of 13 stanzas.
8. 0 Thou Whose sceptre earth and seas obey. Psalm lxxii. This is his second version of this Psalm, and was given in the Comprehensive Rippon, 1844.

The following, most of which are of a more jubilant character, are well known:—
9. How pleasing is Thy voice. Psalm lxv.
10. In Zion's sacred gates. Psalm cl.
11. Lord of all worlds, incline Thy gracious [bounteous] ear. Psalm llii.
12. Now to Thy sacred house. Psalm xliii., st. 3.
13. Sing to the Lord most high. Psalm c.
14. In barren wilds shall living waters spring. Psalm liii.
15. Lord, in these dark and dismal days. Psalm cxxxvii.